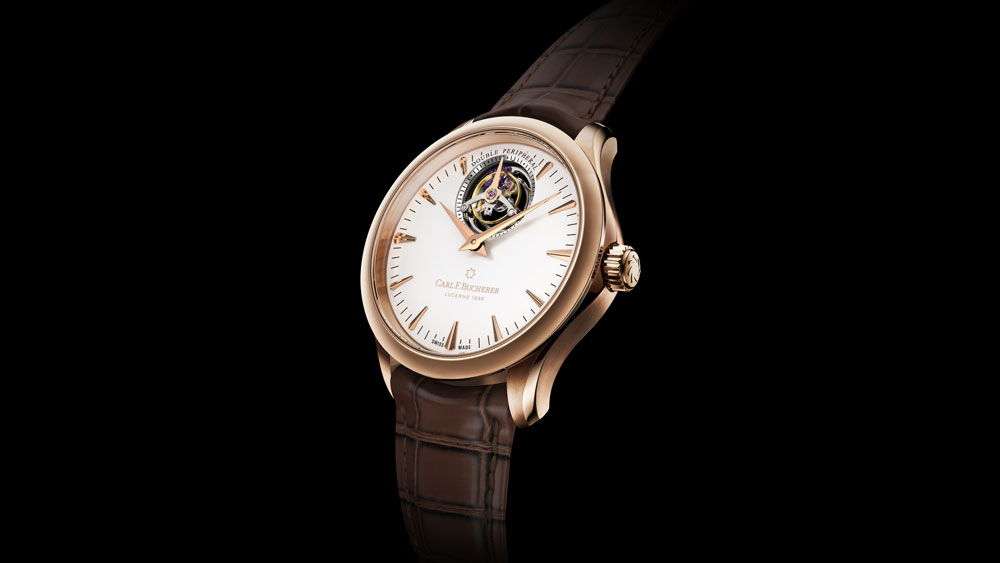 Carl F. Bucherer’s new tourbillon movement, CFB T3000, is the first to employ a peripherally mounted tourbillon cage that looks like it’s floating because it doesn’t need bridges. It essentially one-ups the flying tourbillon, which does away with one bridge but not both. Instead of being mounted centrally and supported by a bridge at both top and bottom, the tourbillon cage on the T3000 is suspended on three ceramic ball bearings placed at points along the periphery. The ball bearings are mounted on springs that act as shock absorbers, making up for any stability that might be lost by the absence of bridges. Aesthetically, the system opens up an unprecedented view of the tourbillon from both the front and back of the case. The cage is thus the focus of an otherwise minimalist dial, applied with wedge-shaped indexes and lancet hands.

A peripherally mounted rotor achieves two things: It opens up the caseback to expose the movement, which would otherwise be partially blocked by a central mounted rotor, and it saves space by making the watch one layer thinner, though not necessarily smaller, in diameter. The Manero Tourbillon Double Peripheral measures 43.1 mm in diameter and is 11.57 mm thick with a 4-mm-thick movement. The peripheral rotor is not new. Carl F. Bucherer started using an automatic peripheral winding system back in 2008, a technology that has since been employed in some form by other manufacturers, including Breguet and Jaeger-LeCoultre.

The Manero Tourbillon Double Peripheral’s Calibre T3000 incorporates silicon components, including the pallet and escape wheel, which eliminate the need for lubrication and resist magnetic fields. It has a stop-seconds function for accurate setting and is COSC (Contrôle Officiel Suisse des Chronomètres, the Official Swiss Chronometer Testing Institute) chronometer rated. The watch, in 18-karat rose gold, is priced at $72,300.