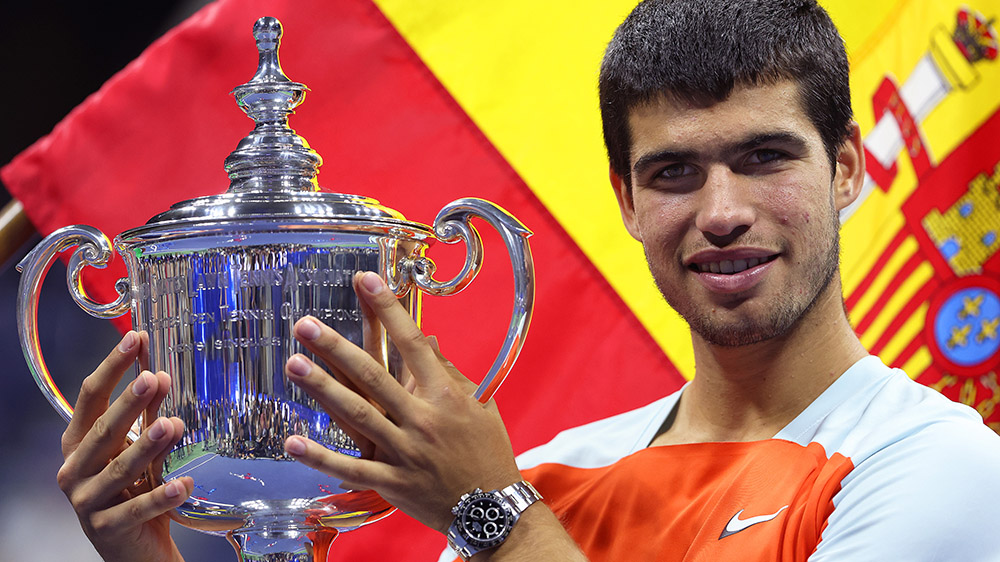 Carlos Alcaraz may only be 19, but he’s already accomplished at least two feats that most could only dream about.

The Spanish tennis player won his first grand slam title at the US Open on Sunday night, defeating Casper Ruud in four sets. Then, immediately following the most significant moment of his career, the teenage sensation slapped on a gorgeous Rolex Daytona for the trophy ceremony.

Think about the watch you were wearing at 19. It may have been nice. It may have even been Swiss-made. But did it also have the distinction of being the world’s most coveted timepiece? Only so many of us are that lucky. Alcaraz has fully earned his Daytona, though. He signed on with Rolex as a brand ambassador earlier this year, when he was still 18. Nine months later he’s a grand slam winner and men’s tennis’s youngest top-ranked player, so we’d say it was a good bet by the watchmaker.

The specific watch that Alcaraz wore for the trophy presentation was a Cosmograph Daytona Ref. 116500LN, the brand confirmed to Robb Report on Monday morning. Introduced in 2016, it is the current production “Oystersteel” Daytona and has a 40 mm case with screw-down pushers, a Cerachrom ceramic bezel with an engraved tachymeter scale and an Oyster bracelet with a folding Oysterlock safety clasp and Easylink comfort extension. It’s available with either black or white dial and bezel combo, and the tennis player opted for the black version on Sunday night.

Powering the watch is Rolex’s in-house Cal. 4130 movement, which it says makes the Cosmograph Daytona the “ultimate racing tool watch.” The movement has bidirectional self-winding via a perpetual rotor and a power reserve of 72 hours.

If you’re somehow fortunate enough to find the Cosmograph Daytona at an authorized dealer, you can expect to pay $14,500 for the gorgeous chronograph. Thanks to his deal with Rolex, we imagine Alcaraz won’t have to pay for a Rolex anytime soon. Even if he did, he’d easily be able to afford the timepiece now. Sunday’s win netted the 19-year-old $2.6 million, pushing his career earnings to $9.1 million.