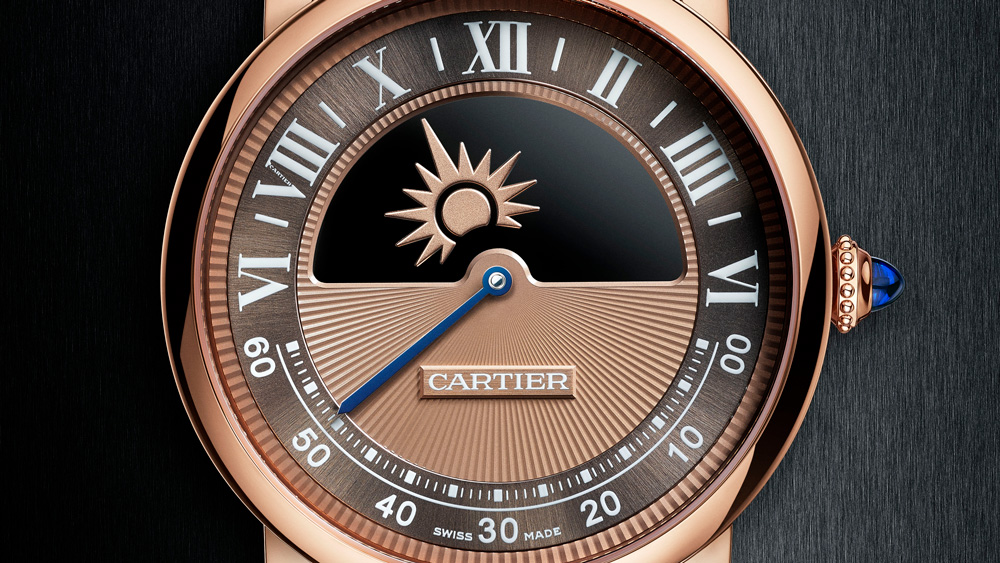 The Cartier mystery clock dates as far back as 1913, and the mystery clock as a concept goes back even further. A mystery clock has what appear to be floating hands at the centre of a translucent dial; the mystery, of course, being the driving force behind the hands since there is no visible gear train in contact with them. Only those with equal measures of clockmaking knowledge and a creative mind have had a chance of figuring it out.

As with many mysteries, the answer lies in concealment. The hands of a mystery clock are not driven by a central canon pinion. Instead, they are fixed upon two large sapphire (or rock crystal) discs and the discs are driven via hidden teeth at their periphery by hidden gears. It’s fiendishly simple for such a visually baffling effect.

A mystery watch is essentially the same, but the reduced dimensions make execution all the more impressive. But what is a brand to do when they amass a back catalogue of mystery watches? Simple: The watchmaking and the creative thinking must turn up a notch or two. Cartier is a brand that has cemented itself as a modern go-to for mystery, and in their Rotonde de Cartier Mysterious Day and Night Watch ($63,000) and Skeleton Mysterious Double Tourbillon Watch ($216,000) respectively we are presented with two excellent newcomers.

Powered by Cartier’s Calibre 9982MC, the Day and Night Watch is essentially just a time-only watch, but with immense character. The bottom half of the dial is devoted to minutes, with a retrograde hand snapping back to zero every hour. The top half of the dial runs from 6 to 12 to 6 (12 hours) again and provides the chapters for the mystery hand to indicate. There is a large aperture cut into the top half of the central sector of the watch, and a sapphire disc with both moon and sun hour indicators will rotate once every 24 hours. As such, it simultaneously indicates the passing hours and day/night.

Some may have already fallen in love with this complication, as it was presented at the 2013 SIHH, without skeletonization. The 2018 Skeleton Mysterious Double Tourbillon is visually even more striking, and, like its 2013 sibling, has the Geneva Seal to set to the record what your eyes have long since accepted.

Unlike early mysterious clocks, it is not the hands that seem suspended in air, but the regulatory organ. A flying tourbillon sits on a sapphire disc, driven by gears that are partially concealed by the familiar skeletonized framework that doubles as radial roman numerals. The tourbillon rotates around the centrally mounted fixed wheel, once every five minutes, while it rotates on its own axis once every 60 seconds. This double rotation qualifies it as a double tourbillon, although both axes occupy the same plane.

The Rotonde de Cartier Skeleton Mysterious Double Tourbillon is available in a platinum 45mm case, with sapphire cabochon, blued hands, and has a reserve of 52 hours.