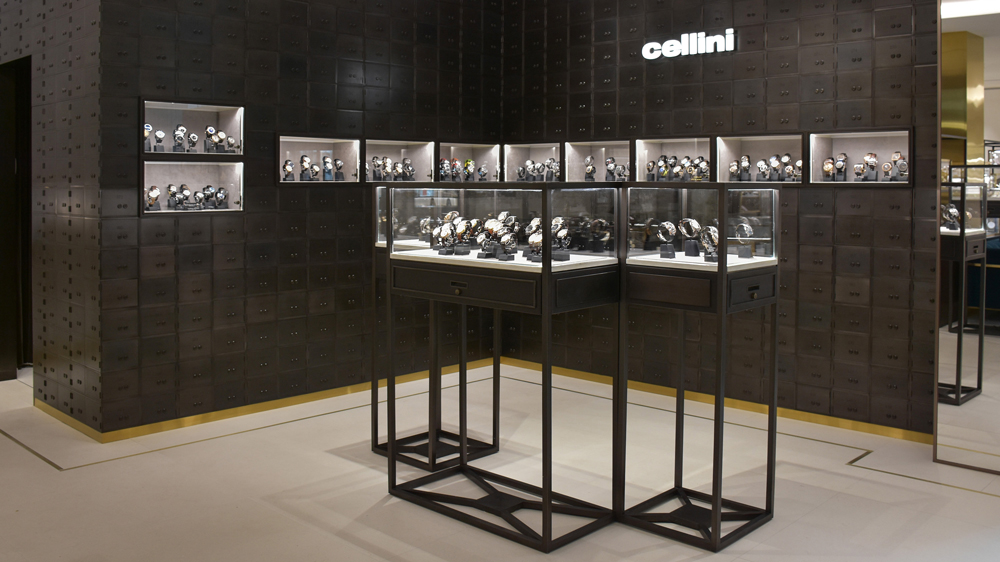 For four decades, Cellini’s Leon Adams built his independent watch and jewelry business on the ground floor of New York City’s historic Waldorf-Astoria hotel. There, he secured a reputation for carrying exceptional jewelry, unique colored diamonds, and some of the most exclusive watches available on the market. If just one special-edition watch is made available in the U.S., Cellini has it. Last year, Cellini had to close its 40-year-old boutique in the Waldorf-Astoria due to renovations that will turn its rooms into residential apartments. Adams also closed Cellini’s 31-year-old Madison Avenue boutique this year and spent 14 months building out his new 2,300-square-foot boutique on 430 Park Avenue, which opened its doors this week. We caught up with Adams in his new digs for the lowdown on the new boutique, new brands, and the state of the industry.

Why did you decide to return to Park Avenue with the new store?
We didn’t want to be too far from our original location on 50th and Park. We’re also pretty close to our store that was on Madison and 53rd for 30 years. So we’re close enough to the Madison clients and a hop, skip, and a jump from our Waldorf [Astoria] client base. It’s exciting to us because Park Avenue has never really been known as a shopping street like Madison Avenue or Fifth Avenue, and I think this store has opened up a new shopping corridor on Park Avenue. Since we’ve come, Macklowe Gallery has opened up on the corner across the street on 57th and Park. We have Heritage Gallery nearby and the Phillips auction house one block north of us, and you have the Ferrari showroom one block south. We also have a new office building going up across the street that’s going to have retail down below. And from what I understand, there’s a prominent jeweler looking to open next to the Macklowe Gallery. So it seems like the whole area is evolving.

Did you bring on any new brands for the opening of the boutique?
We’ve brought in Bovet, which is a new brand for us. Other than that, in the last nine months we’ve been actively pursuing many high-end independent brands, which is something we intend to do with this new location. We’ve established relationships with a bunch of brands starting in November of 2017, like Moritz Grossmann, Urban Jürgensen, and MB&F. We are expecting some pieces from Kari Voutilainen, and we’re expecting some pieces from Romain Gauthier. We want to have a range so a collector can move from a Greubel [Forsey] to an MB&F to a De Bethune to a Laurent Ferrier and so on and so forth.

Are more watch collectors searching for independent brands now?
Absolutely. I think that most of the collectors who have collected the mainstream brands are looking to the independents because there hasn’t been a lot of innovation with the mainstream brands in the last few years. A lot of the companies went down market to be more competitive, but instead of lowering prices on existing models, they introduce a similar model under a different name at a much lower cost factor. The major manufacturers showed us 13 very nice pieces all in stainless steel with no outstanding movements. And if they are coming out with great pieces, they’re making very few of them. For example, A. Lange & Söhne came out with the Triple Split this year, but they’re only making 100 pieces for the world, which means we’ll see one, maybe two. So how many collectors can we satisfy with that? I think in watchmaking today we’re seeing some of the greatest innovation among the independents.

Was there a new watch this year that personally impressed you?
I was extraordinarily impressed by the Romain Gauthier Logical One. That is a spectacular watch. The finish and the quality of the movement is superb, and the movement chain set with ruby jewels just blew my mind. Obviously, it’s not for everyone—this timepiece starts at 113,000 CHF [or $112,810 at current exchange].

What are some of the other rare timepieces you will have?
The Bovet Recital, which is quite an exceptional piece. We’re getting in the new MB&F green dial tourbillon for 2018, and we’ll get a new one for 2019—both of which are committed to already. We will have the new Cartier Crash, which is lovely and limited to 68 pieces. Hopefully we’ll get in some Logical Ones, but for the most part, this year the super limited pieces were few and far between.

What do you have in your own collection?
I like watches that don’t give me trouble. [Laughs.] I delve into a lot of brands actually. I like A. Lange & Söhne, De Bethune, Urban Jürgensen. I’ve yet to own a Bovet, but I’m looking forward to acquiring one and a Roman Gauthier, as well.

What was your first timepiece?
The first watch I bought in 1977 or 1978 was a steel-and-gold ladies-size Audemars Piguet Royal Oak, which I still have. I liked smaller timepieces then. Somewhere around that time, I also acquired an Omega Speedmaster, which was a great watch. But back in the ’70s, we weren’t the watch purveyors that we are today. We only carried a few brands: Omega, Corum, and Audemars Piguet. We were more focused on our jewelry collection in those days. We started expanding our watch collection in the mid-’80s.

Do you find women are buying more complicated timepieces?
I see a lot of women buying moonphase complications—Bovet, Franck Muller, Piaget, and Jaeger-LeCoultre have nice moonphase timepieces. But I don’t think the American female consumer is opting for the tourbillon or retrograde movements as some of the European or Asian women are.

What are the trends in jewelry that you have been seeing?
Anything and everything! Although I think women are wearing less formal jewelry, and there is a trend toward more yellow gold. Up until two years ago, we were selling 90 percent rose gold and white gold. Even in ladies’ watches, we see an uptick in the sale of yellow gold.

Are there any particular stones that are popular at the moment?
We always sell sapphires better than rubies or emeralds. But overall, there’s a trend toward yellow gold, diamonds, and easy-to-wear, classic layering jewelry.

What are some of the rarest stones available at Cellini today?
I have an exceptional Burma ruby. I have a magnificent D flawless Golconda diamond that belonged to the Aga Khan, and I have some super-fine gem emeralds in antique Cartier settings. I specialize in colored diamonds.

How did you begin specializing in colored diamonds?
When I started in the business, my mentor was an 80-year-old gentleman who was the supplier to the 1964 World’s Fair gem salon. He was one of the major colored-diamond dealers in the world. He took me under his wing at 21 years old and would call me up when he acquired something and would show it to me and educate me as to why it was so rare. One day, he called me up to his office, and he opened a diamond paper with a 43-carat round vivid pink diamond. I’ll never forget the weight. It was so pink, it was like taking pink paint and splashing it onto white canvas. In those days, the highest price for a pink diamond was $50,000 per carat. He was asking $75,000 a carat for this stone. Then he pulled out an article about a stamp that sold for $1 million dollars that had an airplane that was accidentally printed upside down that was one-of-a-kind in the world. He said to me, “This stamp has to be kept between glass because if you blow on it, it’s going to disintegrate. This diamond is one-of-a-kind and took millions of years to make and will be around for your children’s children’s children. If this stamp is worth $1 million, why can’t this diamond be worth $75,000 per carat?” I had nothing to say. [Laughs.] It sold the next day to a prominent collector in the Midwest. One day we’ll find that stone again.

What would the stone cost today if you could find it?
That stone would easily fetch $1.5 million per carat if not more.

Who was your mentor in the watch business?
The school of hard knocks! But it’s taught me a lot, and the watch companies, for the most part, have been extraordinarily supportive over the years.