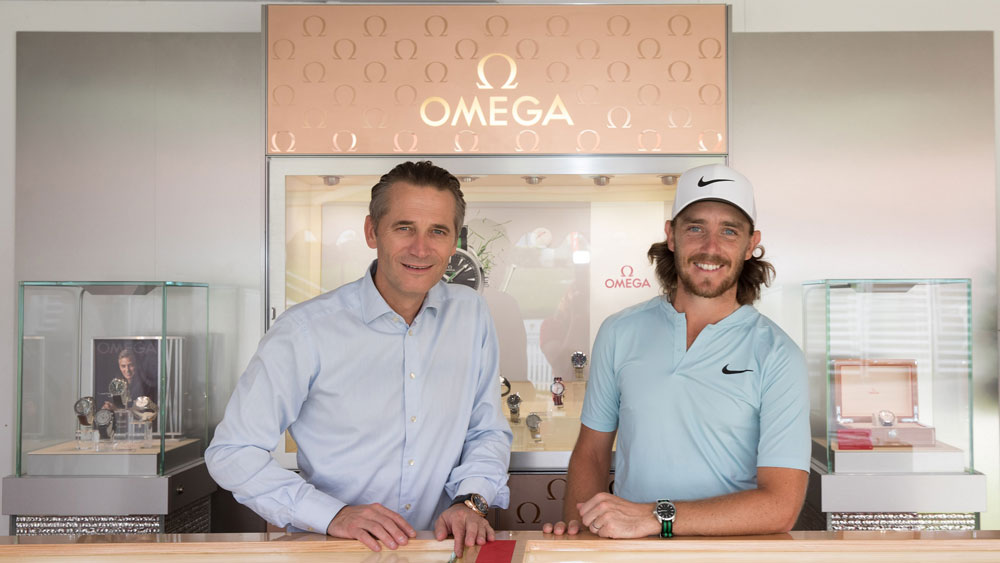 The Ryder Cup is rapidly becoming the most popular and eagerly awaited event in the world of professional golf. Since Omega is the official timekeeper on tour, the luxury watchmaker used its sponsorship of the recent PGA Championship outside St. Louis to introduce its 2018 Ryder Cup Edition ($5,950).

At the final golf major of 2018, Omega CEO Raynald Aeschlimann confirmed Omega will once again break ranks with its European roots to support Team U.S.A. as it defends its title at the Ryder Cup in Paris next month. Omega’s new Ryder Cup watch celebrates that partnership.

According to Aeschlimann, the new timepiece has some key differences from the last Ryder Cup watch presented in 2016 at Hazeltine.

“The 41.50 mm gent’s watch was quite distinct because of its golf ball pattern on the silvery dial and a three o’clock date window,” says Aeschlimann. “This year, we’ve really embraced the design attributes of the updated Aqua Terra collection with the horizontal stripes on the dial, the symmetrical 41 mm case, and the date window at six o’clock. We have added a Master Chronometer movement, which gives this new Ryder Cup watch a higher standard of precision and performance.”

Omega will again be the official timekeeper of the Ryder Cup when it returns to the U.S. in 2020 at Whistling Straits in Wisconsin. For now, the watchmaker’s tournament timepiece with the official team colors will travel with every American player as they take on Team Europe.

Elsewhere in the sports world, Aeschlimann ranked the Planet Ocean “PyeongChang 2018” from this year’s Winter Olympics as Omega’s most popular special issue.

“At the same time, we released our Seamaster Olympic Games collection, with five different models in the colors of the Olympic rings, and the Seamaster Olympic Games gold collection,” he says. “Now we’ll be counting down to the Tokyo 2020 Olympics—and that year will be 125 years since the Omega name was first used within our company.” Omega initially began as La Generale Watch Company founded by Louis Brandt in La Chaux-de-Fonds, Switzerland, in 1848. Omega was started by his sons, Louis Paul and César, in 1895 as an in-house manufacturing and total-production control leg of the businesses that allowed component parts to be interchangeable. It would officially become its own brand in 1903.

This year, the best sellers continue to be releases within Omega’s classic collections, like the Railmaster and Seamaster, according to Aeschlimann.

“Constellation and De Ville watches continue to be big sellers in Asia. We’ve also been very pleased with how the new Railmaster models have been selling around the world. The simplicity and heritage of that design has really been sought after by customers. And, of course, we released our Speedmaster Speedy Tuesday ‘Ultraman’ watch last month. All 2,012 models sold out in one hour, 53 minutes, and 17 seconds.”

Looking to 2019, Aeschlimann looks forward to the 50th anniversary of the first moon landing and the release of James Bond 25, when 007 will once again return to the big screen with an Omega on his wrist.