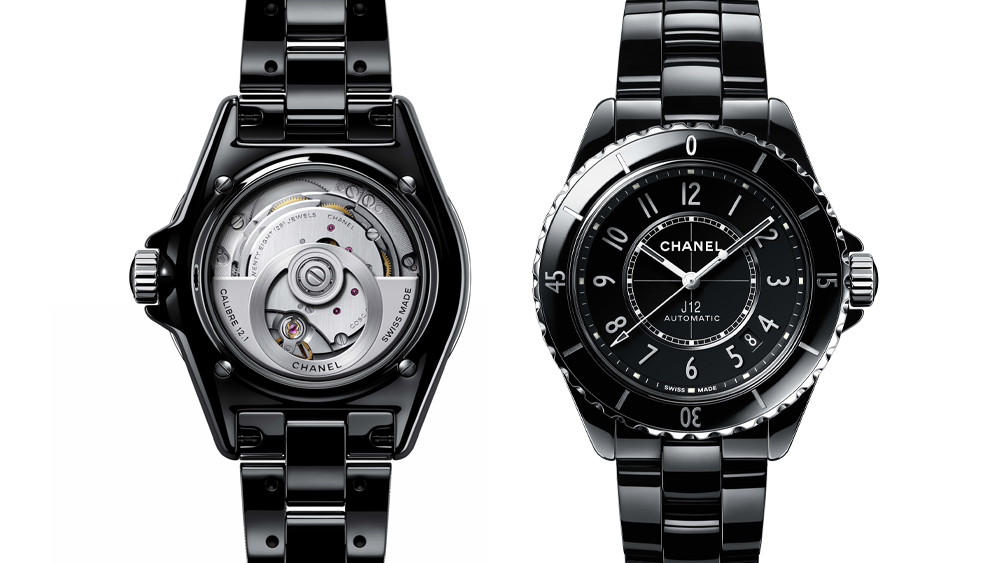 There aren’t many fashion brands that have successfully expanded into watchmaking—timepieces from houses like Fendi, Gucci, Salvatore Ferragamo and Versace mostly qualify as fashion statements rather than haute horlogerie. While Dior, Hermès and Louis Vuitton have made strides to break into the big leagues, (the Hermès’ Arceau de la lune was particularly outstanding this year), no fashion brand has ever had as big of a hit as Chanel with its J12. In certain circles, the watch has become a luxury timepiece as coveted and recognizable on the wrists of well-dressed women as a Cartier Balon Bleu or a Rolex Datejust.

The J12, created by Jacques Helleu in 2000, has been an icon for the brand ever since. And this year, Arnaud Chastaingt, director of Chanel’s watchmaking design studio, has revealed its reinvention—the result of five years of planning and production. It launches in stores today.

“At first I chose to change everything—I think I needed to in my creative approach,” Chastaingt told Robb Report at the watch’s unveiling at Baselworld this year. “But I quickly understood that the original design was perfect. Finally, I arrived at a paradox and decided to change everything without changing anything. Bon, Chanel loves paradoxes, but I think it’s really like that. For me, it was more than a creative concept—it was an obsession. My work was not to do another revolution, but an evolution.”

Chastaingt, who arrived at Chanel in 2013 after a decade spent designing at Cartier, said at first it was important for him not to touch the J12 because it was such an icon of Chanel watchmaking. “The J12 was the first connection I had to the watch world,” said Chastaingt. “I was studying design at the time when it came out, and I had such a crush on this watch—it was a revelation.” He calls the watch his muse, but it would be another four years before he would begin to put his touch on it. In the meantime, he was busy getting to work on a few other brand pillars.

Ultimately, Chastaingt changed around 70 percent of the J12’s design—but you might never realize it unless you flip the watch over. The most important change to the new J12 is its new caliber 12.1 movement, now visible through a sapphire crystal caseback. “When we decided to change the movement in the J12, there were two reasons: One was the Swatch Group announcing that they would stop supplying other watch companies one day, and the second was a philosophy of what a watch stands for today,” says Beau. “You don’t need a watch for time. You need a watch to express your personality; you need a watch because you think it’s a beautiful object. It’s about beauty, design and quality, of course. We wanted the J12 to be as beautiful on the front as it is on the back.”

Chanel recently invested in Kinessi, a watch manufacture which also supplies movements to Tudor—a Rolex brand and fellow investor at the manufacture. “The beauty of Kinessi is that it allows us to build movements exclusively designed for Chanel at a price that benefits from all of this know-how and economies of scale in the production of different shared components,” says Beau. So what does the new movement add to the price? About €350 (approximately $390 at current exchange), according to Beau. The black model and the white model, without gem-setting, retail for $5,700 each. The new J12 with diamond markers on the dial retails for $7,000. An all-black limited-edition run of 55 pieces features a polished ceramic bezel, and will go for $12,800.

A key feature is the rotor; unlike a traditional half-moon design found in most timepieces is a hollowed out circle made of Tungsten in order to keep its weight. Depending on which version of the J12 you get, the rotor is either in its pure metal form, in black, or decorated with either circular or baguette diamonds. The J12 with diamond markers comes with a diamond-encrusted rotor. The version covered in baguette diamonds, seen below, comes with a baguette diamond rotor and is priced at $1,103,000.

But the devil was also in the details for Chastaingt—other features he changed were design elements like a smaller bezel, taking the number of notches on the bezel from 30 to 40, and a smoother clicking sound of the bezel. “For me, sound is very important,” says Chastaingt. “It’s like a car—you don’t have to see it to be able to hear whether or not it’s a luxury car.” He also toned down the size of the crown, re-worked the hour marker font with an in-house typographer and made the numbers from ceramic for added sharpness. He also replaced white luminous material with black SuperLuminova—a material that didn’t exist when the watch was first created. The bracelet is now thinner,  and even the “Swiss Made” notation on the dial is presented in a new font, sized to fit neatly into the railroad track markers.

It’s updates to these kinds of seemingly tiny details that ultimately add up to a new and improved J12 without sacrificing its core DNA. That is exactly the kind of design tweaking, first perfected by the late Karl Lagerfeld, that has kept Chanel’s tweed suits and quilted handbags, and now its ceramic J12, at the top of the luxury game.