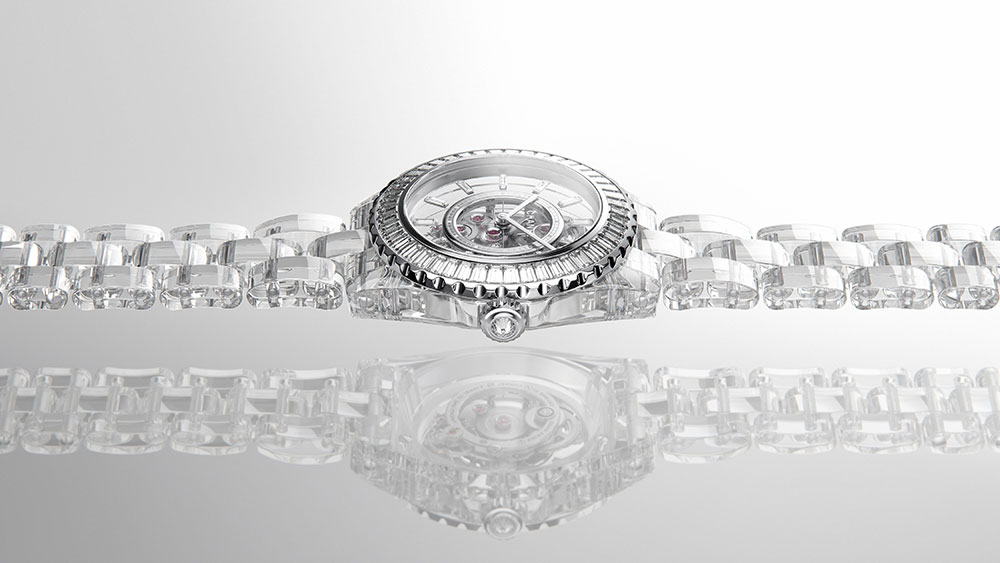 The Chanel J12 kickstarted the ceramic watch boom two decades ago, and in every iteration since then—tourbillon, GMT, gemset, metiers marquetry—has proudly retained its iconic façade…until now. The J12 has swapped ceramic for clear sapphire crystal, the hardest material next to diamond, creating a watch that leaves nothing to the imagination.

The dial is made of sapphire crystal, so that beyond the white gold hands and the chapter ring on the inner dial, there is nothing to impede the view of the movement. The baguette diamonds that serve as hour indicators are part of the show: they are set into the sapphire crystal over the dial, which makes them appear to be suspended in mid-air. Other brands including Richard Mille, Hublot, Bovet, and Girard-Perregaux have worked with the material in dials and casings, but on the new J12 X-Ray the bracelet also comes entirely in sapphire crystal. The links of the bracelet are cut from raw sapphires, exposing the metal hinges that hold them together. The bezel is set with 5.46 carats of baguette diamonds. The result is a piece that looks like an ice sculpture, a pure expression of openness and light. The J12 X-Ray is a natural extension of the J12’s aesthetic—quintessentially minimalist.

The transparent case and dial expose a new movement, the caliber 3.1, also designed with transparency in mind. The plate and bridges are made of clear sapphire, making it seem as if the gear train is suspended without support. Each movement, with components that are made to tolerances of 0.5 mm to 1 mm, takes a week to assemble. Sapphire Crystal watches are notoriously pricey, due to the difficulty and expense of machining the material, and the J12 X-Ray is no exception—priced at $626,000, it will be limited to just 12 pieces.

Chanel is also introducing the J12 Paradoxe, which redefines the meaning of two-tone, which in watchmaking usually refers to steel combined with gold. The J12 Paradoxe instead celebrates both colors of the model’s signature ceramic cases by fusing black and white together in an approximately 1/3-2/3 original combination. The case is made via a complex operation of cutting and then perfectly fusing the two pieces of ceramic together, one black and one white, to form a single case. The two parts are assembled on a metallic support into which the sapphire caseback is set. From there, the trick is to perfectly align the seams where the two colors are fused between dial and case. Chanel takes the concept up a notch with the J12 Paradoxe Diamond, which combines either a black or white case, bracelet and dial with a 1/3 portion that is fully set with baguette diamonds. The ceramic version is priced at $7,150, and the baguette diamond version at $192,600.