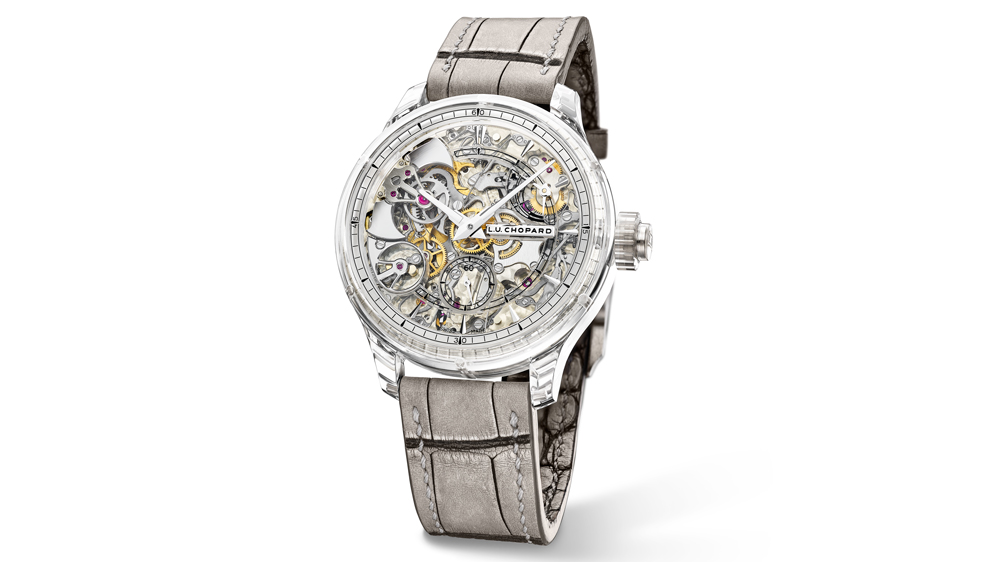 Watches & Wonders 2022, which wraps up on Friday in Geneva, will be remembered as a year of impressive technical launches and refreshing designs. In the midst of it all, Chopard debuted a new system for striking watches that goes a long way to perfecting the sound of a minute repeater, complete with a cool case design that actually enhances the performance.

The salient feature of L.U.C Full Strike Sapphire is its use of crystal gongs that are attached to the sapphire crystal, a trick that causes the sound to resonate on a crystal clear note, like a fork hitting the side of a crystal glass. The monobloc sapphire crystal gong and dial cover were first introduced in 2016 with the Full Strike gold version picking up the 2017 “Aiguille d’Or” award at the  Grand Prix d’Horlogerie de Genève.

In this year’s model, the case is also made of sapphire crystal, which ups the game even more. So convinced is Chopard co-president Karl Friedrich Scheufele that the system is superior to repeaters with steel gongs, that this year he decided to scientifically test it. He enlisted the help of professor Romain Boulandet, head of the Applied Acoustics Laboratory at Geneva’s HEPIA engineering school. Boulandet measured the sound in an “anechoic chamber”—a sound isolation chamber—comparing the Full Strike Sapphire with an earlier, 2006, version of the Full Strike with steel gongs. The result? The Full Strike Sapphire came out sounding four times louder and twice as sharp as the earlier model with steel gongs. “The test has demonstrated that the sound of Chopard’s minute repeater is powerful, harmonious and crystal clear, with tonal richness and acoustic intensity,” says Scheufele. Just to be sure, he called in his friend, maestro violinist Renaud Capuçon (who performed for guests at a Chopard dinner during Watches & Wonders), who gave it its “artistic and emotional endorsement.”

The watch is a wonder of complexity. The 533-components of the movement, caliber L.U.C 08.01-L, are arranged onto the mainplate at 148 different heights, using 83 different tools. The 42.5 mm wide x 11.55 mm thick sapphire crystal case took 190 hours to make (including 80 hours for polishing, compared to 6.5 hours for a steel case. The crown alone measures 8.80 mm thick and has an integrated strikework pusher, also made of sapphire crystal. It is the first non-metallic watch to bear the Poinçon de Genève quality hallmark, a rigorous standard that covers both the design and finishing of the movement and the case.

Thanks to double barrels, one of which provides power directly to the strike function, the watch has a 60-hour power reserve. A two-handed power reserve indicator shows energy remaining in the barrel that drives the movement as well as in the one that powers the minute repeater. The separate power source for the strike enables the watch to chime the most complex and energy-intensive time of day (or night)—namely 12 hours and 59 minutes—up to 12 times without winding.

Chopard holds patents on the watch for the following: monobloc sapphire crystal and gongs; a variable-inertia balance wheel; a clutch-lever device serving to block the strikework so as to avoid losing power reserve during information capture; and a dedicated ratchet-driving mechanism serving to avoid pauses during chiming.

The Chopard L.U.C Full Strike Sapphire is limited to five pieces, priced at $450,000.