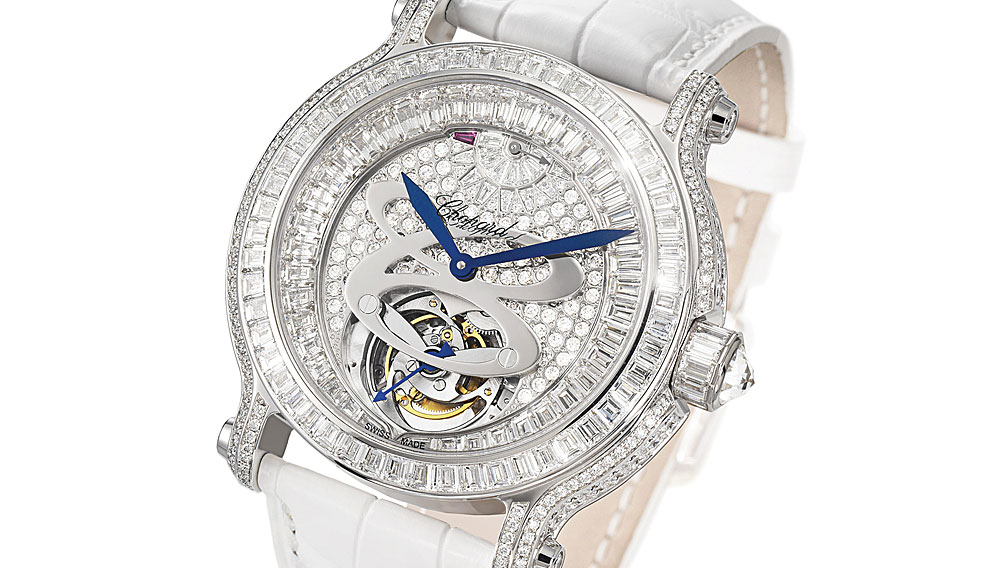 For years, chopard has been an oddly bifurcated company: Copresident Caroline Gruosi-Scheufele designs the glamorous, high-octane jewelry and jewelry watches, while her brother and copresident Karl-Friedrich has built the L.U.C (Louis-Ulysse Chopard) movement manufacture into something that serious collectors can respect. Under the assumption that men and women want different things on their wrists, the company has kept these two spheres largely separate. However, Chopard’s first women’s tourbillon with a high complication—the new $424,470 Chopard L.U.C Tourbillon Lady (800.246.7273, www.chopard.com)—may point to a shift in this attitude.

Chopard’s feminine interpretation of the tourbillon is a technical piece, but the design’s watchmaking virtuosity also extends to the aesthetics. The company adapted the case of its well-known Happy Sport for this piece by decorating it with a labor-intensive setting of tapered baguette diamonds and creating a subtle power-reserve indication in stones at the 12 o’clock position. Chopard has released a number of editions of its four-barrel tourbillon movement, which were assembled at the L.U.C Manufacture in Fleurier; the 50 pieces included in this limited edition, however, were assembled in Geneva.