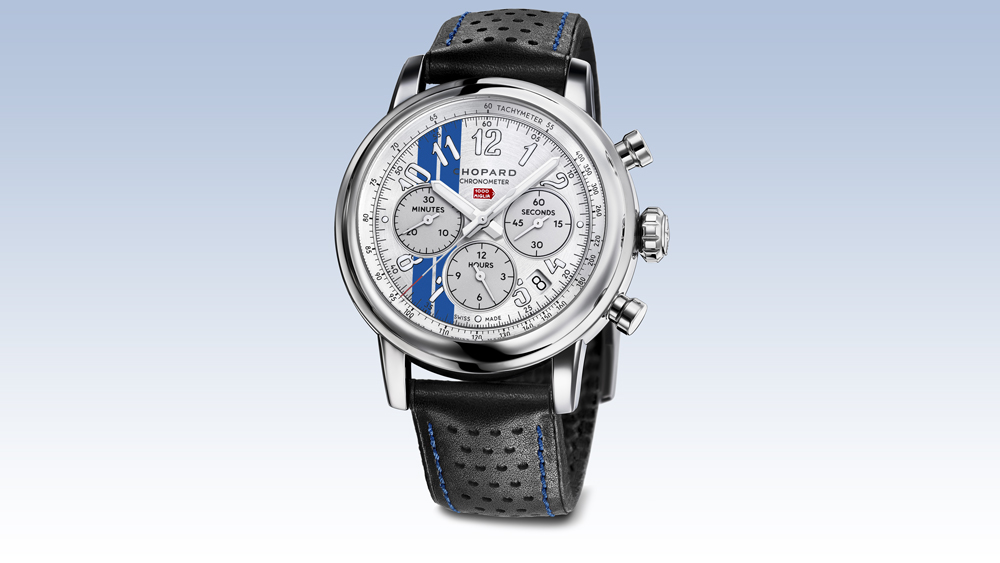 One of the most well-known auto races in history, the original Mille Miglia was a 1,000-mile (hence the name) endurance race that was held on the open roads of Italy from 1927 to 1957—with a break for WWII, of course. The race was eventually banned due to its danger (56 people were killed during the race over the years). When the event was eventually resurrected in 1977, it was no longer a race—minimizing the opportunity for accidents—and the only cars that could enter were vintage models that existed during the time frame of the original race.

This trapped-in-amber event has continued every year since, and watchmaker Chopard has been its official timekeeper and partner from 1988 until now. In celebration of this 30-year partnership, the company has introduced a new watch to its Mille Miglia collection—joining the Mille Miglia Racing Edition 2018 we covered earlier this year—the Classic Chronograph Racing Stripes Edition. The new watch takes a great deal of visual inspiration from the cars of the U.S. Cunningham race team, which painted blue stripes down the center of its vehicles. And while Briggs Cunningham and his team never won the race, their paint job persisted. Now known as Cunningham stripes, the iconic decoration adorns the front and back of the new chronograph.

As the new Mille Miglia only accepts cars from the classic race’s era, Chopard wanted the 42 mm steel-cased watch to have a vintage look, as well. This design decision expresses itself through the traditional pushers and fluted crown on the case and through the counters that resemble old dashboard gauges. Leaving no room for mistaken interpretation, the Rossa Corsa red Mille Miglia arrow logo appears in the center of the dial. An elongated version of the logo is engraved on the back of the watch, wrapping around the upper portion of the back crystal. For convenience, the watch’s dials and Roman-numeral indices are luminescent, and there is a date window between four and five o’clock.

The Chopard Mille Miglia Classic Chronograph Racing Stripes Edition is limited to 50 pieces and will only be available at U.S. boutiques. The watch is priced at $5,900.