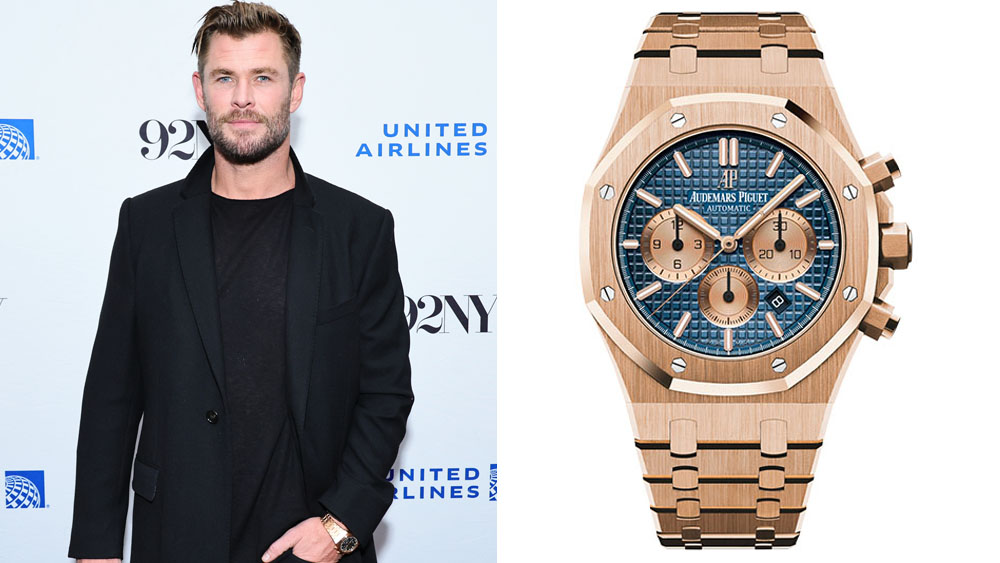 It may not be as big or powerful as Mjölnir, but that doesn’t make Chris Hemsworth’s latest accessory of choice any less impressive.

The Thor: Love and Thunder star was photographed wearing a pink gold Audemars Piguet Royal Oak at a New York screening of Limitless, his new Disney Plus docuseries about pushing himself to his limits in an attempt to live a longer and more fulfilling life. What better time to show off the dazzling timepiece, one that manages to be both elegant and sporty.

Audemar Piguet’s most iconic model has never been more popular as it approaches its 50th birthday. That’s for good reason: Few watches are as effective at mixing heritage with a design that still feels fresh, something we’ve seen in the flood of anniversary editions released since January. And unlike its closest competitor, the Patek Phillipe Nautilus, you can actually get ahold of one, thanks in part to the brand’s efforts to reserve a pool for newcomers. Hemsworth is clearly a fan, and he’s not alone. Just ask Serena Williams and LeBron James—or the person who paid $600,000 for the watch’s design sketch earlier this year.

Despite the Royal Oak’s big anniversary, Hemsworth’s example actually predates the year’s celebrations. The actor’s is wearing the Ref. 26331OR.OO.1220OR.01, a self-winding chronograph with a 41 mm case made of 18k pink gold. This edition has a blue “Grande Tapisserie” dial with pink gold-toned chronograph counters, helping it stand out from other variations. Completing the package is a matching pink gold bracelet with an AP folding clasp.

The timepiece is powered by the watchmaker’s own self-winding caliber 2385 movement. The ultra-thin mechanism—it’s just 5.5 mm thick—includes 37 jewels and has a 40-hour power reserve. Although it’s unlikely Hemsworth would wear the watch on a swim, it is water-resistant up to 50 meters, or 164 feet.

Hemsworth’s Royal Oak is no longer offered as part of Audemars Piguet’s collection, so you may not be able to get one directly from the watchmaker itself any longer. Fortunately, it is available on secondary market platforms such as Chrono24. Just be prepared to splash out: It’ll likely cost you well over $100,000 to get your hands on one.