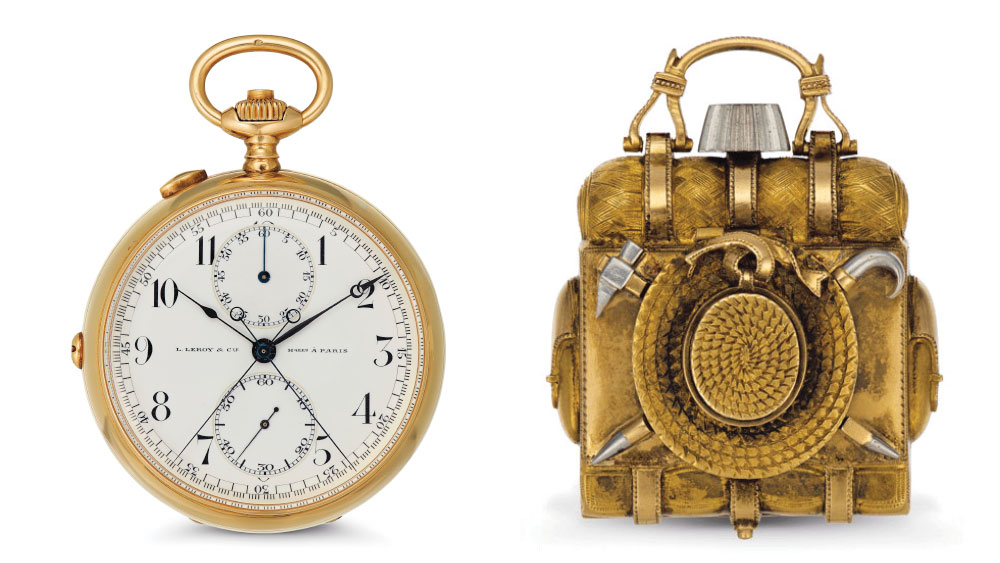 The top two lots in the American Icons sale at Christie’s in New York this week were, not surprisingly, rare pieces made by Patek Philippe. The top lot was a Ref. 5016P perpetual calendar minute repeater tourbillon ($471,000). The second was a 1983 Ref. 3450 co-branded Tiffany & Co. ($350,000). But among the other 60-plus, highly coveted Patek Philippes in the sale, the most charming, hands-down, was a one-of-a-kind watch designed as a tiny backpack. It was made in 1875 for Elbert E. Farman, former diplomatic agent and the American Consul-General to Cairo, Egypt. Farman was evidently something of an adventurer, and the 18-karat gold, enamel and platinum watch was thus designed as an explorer’s backpack with finely detailed engravings outlining a rolled blanket under the tiny handle, tools strapped to the front, a buckled pocket on each side and an Indiana Jones-style hat on top that doubles as a hinged dial cover. Farman was responsible for bringing Cleopatra’s Needle, the Egyptian obelisk, to New York’s Central Park as a gift from the Egyptian government. The watch sold for $62,500.

Meanwhile, the Rolex Daytona, particularly the Paul Newman style, is still one of the current big things. A Paul Newman “Musketeer” Daytona made in 1969 was one of the sale’s top-ten lots. The Musketeer is a rare model with a black dial and sunken subdials, also known as a “flying saucer” dial, that was only in production for a year. It sold for $200,000. Another Paul Newman Daytona, with the reverse color scheme—cream-colored dial with black subdials—made in 1968, sold for $125,000, and a later model in 14-karat gold made in 1978 and signed Rolex Oyster Cosmograph, sold for $125,000. Steel vintage beats gold modern in this market.

Although it seems like Patek and Rolex are the only models at auction these days, several other newer Swiss brands are making their way onto top 10 lists with equally collectible pieces. The third-highest price paid in the sale was $325,000 for a Richard Mille tourbillon split-seconds chronograph with power reserve and torque indication, made in 2008, and a Greubel Forsey white gold Tourbillon 24 Secondes, made in 2017, sold for $125,000.

The power of provenance is another strong factor. A pair of pocket watches selling as a single lot, one owned by Ernest Hemingway and the other by his friend, French hotelier Charles C. Ritz, sold for $43,750, double the estimate of $15,000-$25,000. The Hemingway piece, a gift from Ritz, is a split-seconds chronograph made by L. Leroy & Cie in 1914. The Ritz piece is a gold Vacheron Constantin Chronometre Royal Genève with Roman numerals and a small seconds subdial.