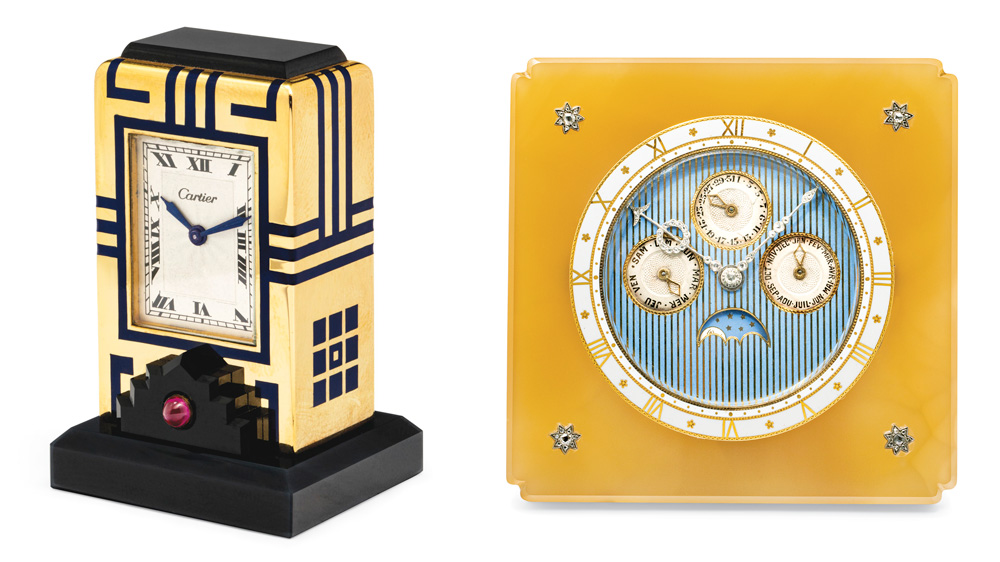 Long before it created the Santos wristwatch in 1904 and became the jeweler of choice for the Duchess of Windsor, Cartier carved out a reputation as a master of decorative desk clocks. Christie’s upcoming sale of 101 Cartier clocks demonstrates the French house’s considerable skills in the arts of enameling, engraving, gem setting and marquetry—all on a canvas much larger than the watch dial.

Most of the clocks, made within a span of 80 years, come with their original cases, and date to the Art Deco and Belle Époque eras prior to World War I. The collection was amassed by a private European collector over the past 20 years and includes some of the finest examples ever made. “When I first saw them all together on a table, I nearly fainted,” says Christie’s jewelry specialist Marie-Cecile Cisamolo. “We don’t see something like this every day. There were even more pieces in his collection, but we selected the best ones, and there were some that the collector decided not to part with.” The collection in total is estimated to sell above $5 million, but she feels some lots will sell for well above their high estimates. It is also possible that some will be bought by Cartier for its in-house collection. The sale, originally scheduled to be held at the Four Seasons Hotel des Bergues in Geneva, will now be held online July 1-21.

The collection includes several of Cartier’s famous pendules mystérieuses, or mystery clocks, in which the hands appear to be suspended in mid-air with no clockworks showing. Cartier would later miniaturize the concept for wristwatches. One of the outstanding mystery clocks is a Belle Époque semi-mystery day and night desk clock made in 1913 (CHF 140,000-200,000 or approximately $146,184-$208,834). It is inscribed with the Latin “Horas Non Noto Nisi Luciors,” meaning “I do not count the hours if they are not brilliant.” The hours are read on a retrograde index by two cursors, one in the form of the sun, the other as a moon, which appear alternatively during the day and night. The minutes are indicated on a central index by a diamond-set hand in the shape of an openwork arrow. The central dial is blue guilloché enamel, with white and light blue enamel, rose-cut diamonds and gold.

The star lot, estimated at CHF 120,000-180,000 ($125,291-$187,936) is a 1926 Art Deco clock made by longtime Cartier collaborator Maurice Coüet, a craftsman who supplied table clocks exclusively to the company. It is outstanding for its combination of métiers, including burgauté lacquer—a method of decorating enamelware with insets made of the polished blue-green shell of marine snails. It also contains cabochon moonstones, mother-of-pearl, turquoise cabochons, rose-cut diamonds and gold.

The collection also includes several complications, including minute repeaters and annual calendars. One of the minute repeaters is a clock made in 1912 by Maurice Coüet with blue guilloché enamel, rose-cut diamonds, black enamel, cabochon moonstone, mother-of-pearl marquetry in silver and gold. It was previously sold by Christie’s in 2011 or CHF 37,500 ($44,223). Its estimate in this sale is CHF 30,000-50,000 ($31,328-$52,213).

Below is just a taste of some of the other extraordinary pieces coming up for sale at the auction, but whether you are a potential buyer or not we suggest perusing Christie’s catalog to see the entire lot.