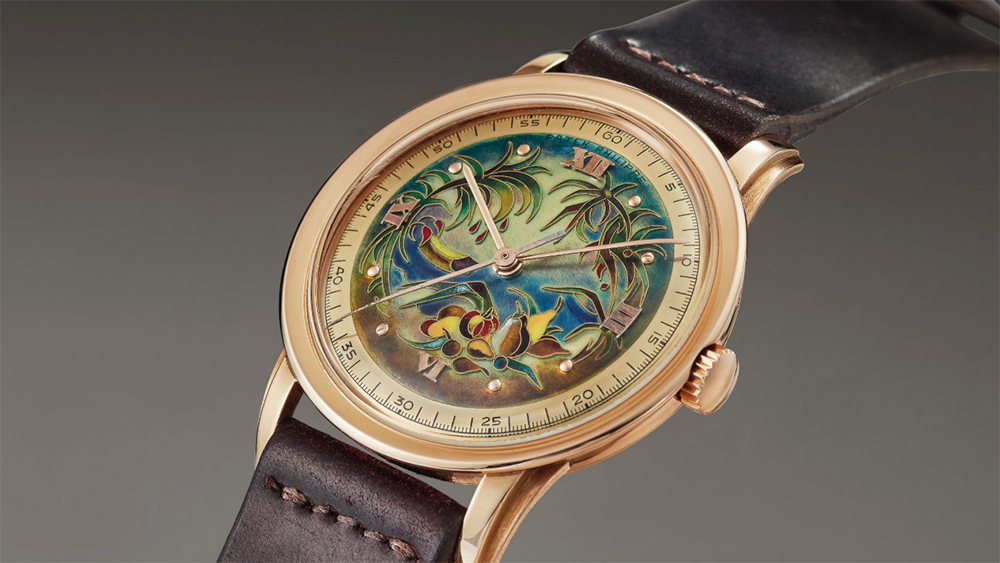 On Thursday, Christie’s will auction off a refined selection of 100 timepieces for its latest sale, “An Evening of Exceptional Watches.” The watches include highlights like a rare 18-karat pink gold Patek Philippe watch with a mètiers d’arts enamel tropical dial made in 1950. Another lot, of course, features a Rolex “Paul Newman” Daytona—this one originally sold by Dallas retailer Linz Brothers. But it’s also full of surprise gems, like baseball legend Joe DiMaggio’s Longines, an original Audemars Piguet Royal Oak from the ’70s, and an unusual Jaeger-LeCoultre ladies watch, to name just a few.

“This is a really nice, tightly curated sale and very strong in terms condition, rarity and provenance,” says Christie’s watch specialist Rebecca Ross. “I remember when I started working here six years ago, there was a lot of low-value filler lots, no reserve lots—there’s none of that anymore. It’s nice because each one is really special.”

This 18-karat pink gold Patek Philippe with a polychrome enamel dial dates back to 1950 and is the first of its kind to come to market. There are only six known versions with a pink gold case and a tropically themed dial. “We researched the movement and ran the case number and we realized it came before the other known models from 1951,” says Ross. “Secondly, the case is super sharp and the watch hasn’t really been worn at all and the hallmarks are still visible on the side. Its rarity and condition make it the top lot.”

Beyond sharing that the watch was part of a top collector’s personal collection, Christie’s remains mum on how it came into their possession. The 37 mm Ref. 2481 is one of the largest vintage Patek Philippe watches ever produced—intended for a man at the time of production. Post-WWII watchmakers tried to woo customers with more uplifting or celebratory products, and this was one of the results. Today it could easily be worn by either a man or a woman.

It was, in fact, a woman who conceived the dial. Marguerite Koch, one of Patek Philippe’s best artisans in its Stern Freres dial manufacture from the ’40s to the ’60s, created this tropical scene. She took inspiration from artists Henri Rousseau and Paul Gaugin’s rainforest series to create the image.

Update: This watch failed to sell. Word on the street is that it was not in good condition.

Well yes, there is another Rolex “Paul Newman” Daytona on the market—but this one stands out for its marking by the Dallas retailer Linz in white on the black dial, just beneath the Rolex branding. Ross says only two other Linz-branded Paul Newman Daytonas have been sold at auction—one at Antiquorum and one at Phillips. The Phillips piece came with a white dial with a black Linz branding and sold in 2016 for CHF 874,000 (approximately $884,112 at the exchange rates on the date of the sale).

“It’s really rare and we’ve put it up for auction in the exact same condition we received it, so it has not been touched,” says Ross.

Linz signings were distinctive for their backward Ns and that all the letters are capitalized except for the “i.” Double-signed watches have been increasingly sought-after at auction—a Patek Philippe Ref. 2499 from the Venezuelan retailer Serpico y Laino sold earlier this year at Christie’s for $3.2 million—and the Linz marking on the Daytona is among the most unusual looking double-signings.

Another double-signed reference is this Ref. 1463 retailed by Swiss retailer Gübelin with a bracelet made by Gay Frères for the jeweler. This particular reference is Patek Philippe’s only regular production vintage chronograph and is known by collectors as the “Tasti Tondi” (Italian for “round pushers”). This model is from the second series of Tastis made from the mid ’40s until 1961. It has not been polished and it maintains its sharp edges, but what really makes this watch special is that it is thought to be one of only three references in existence made in steel.

This Ref. 3488 had not been worn for decades and was consigned by the granddaughter of the original owner, who purchased it in 1969. But there’s one other feature that makes this piece extremely rare. The white gold Milanese bracelet is detachable and is fitted with a miniature metal calendar, in this case for October 1969, that slides onto the bracelet so its wearer could easily check the date. “I’ve never seen that before, but the calendar was stamped by a pharmaceutical company that made eyedrops,” says Ross. “We don’t know why he had it, but we do know he was an ophthalmologist. We know it came from Europe and he must have asked Patek Philippe to make it for him specially.”

Only five other white gold references 3448 have appeared in public, so this watch is extremely rare through and through.

Among non-collectors, this watch could easily fly under the radar, but those in the know recognize it as the original Audemars Piguet Royal Oak Ref. 5402 manufactured in 1978 in white gold and outfitted with unusual diamond markers on its tapisserie or waffle-design dial. This famous piece by lauded designer Gerald Genta was first unveiled in 1972 with its now iconic octagonal bezel. It was originally only designed in steel with only 149 white gold models believed to be made, presumably for top clients. This piece is number 111 and is in mint condition with no signs of restoration.

We have no idea who Jimmy Kelly is and neither does Christies, but how cool is this Longines watch that was once a gift to the baseball legend Joe DiMaggio? From the mixed font engravings to the inscription “To The Best From The West”, this is a very nice piece with provenance to match. The watch came to Christie’s by way of Paula DiMaggio Hamra and Kathie DiMaggio Stein and comes with a certificate verifying this watch once belonged to their legendary grandfather’s personal collection. Another Joe DiMaggio-owned Bulova is also up for sale and comes with an inscription of his name and a reference to his enlisting in the Air Force during WWII, as well as a military certificate.