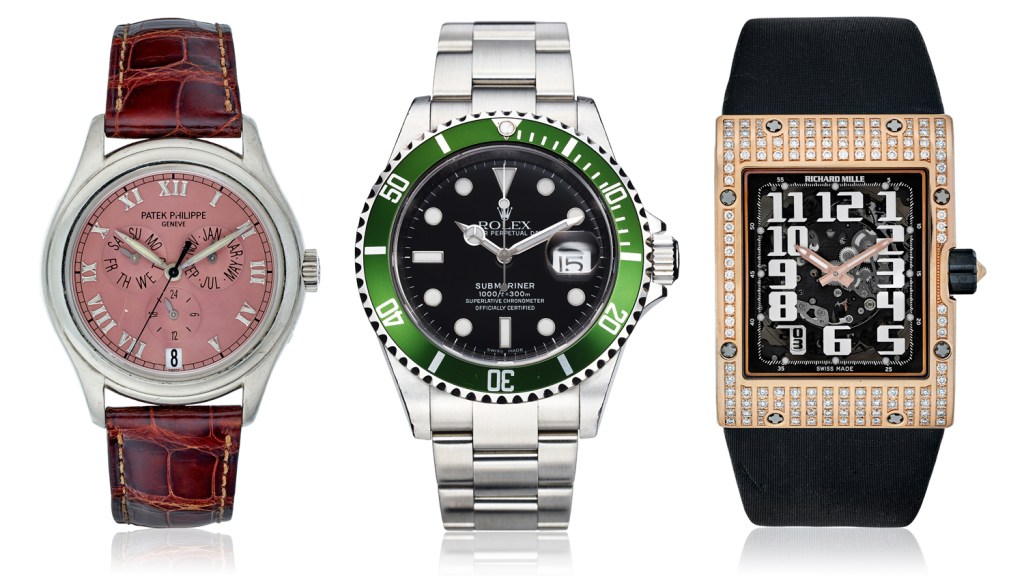 While big-league collectors tend to dominate the sale room at live auctions, online-only auctions are the perfect playground for serious and novice collectors alike. The clock starts ticking today for Christie’s online watch auction, which will run through May 8 and features over 150 lots. The auction presents entry-point prices, starting at $3,000, for even top-tier watchmakers along with competitive prices for currently sought-after noted models, starting at $90,000. We caught up with Christie’s watch specialist Ryan Chong to give us a preview of the best on the block.

Which watches from the “Holy Trinity” or “Big Three” (Patek Philippe, Vacheron Constantin, Audemars Piguet) are special to this auction?

One of the top watches is a 5990, which is the Nautilus Travel Time, and it’s still produced by Patek Philippe. The one that we have is from 2014, and the Nautilus is extremely hot right now. They’ve achieved record prices at auction. It’s really exciting for us to have a current production model in the auction. It’s set for $40,000 to $60,000. We’re hoping that performs very well.

Rolexes have made a big splash in the auction market recently. Have prices gone up across the board?

The prices have definitely gone up across the board for Rolex watches—mostly Daytonas and Submariners. We have the Rolex reference 6538 known as Big Crown in this sale, and the price is $90,000 to $150,000. These watches are early Submariners, so they’re very hot in the market right now, and they are what everyone is looking for, so it’s really exciting to have one in our online sale. It’s a top lot in the sale.

What are some other big trends you’ve seen recently?

Rolex is really the hottest trend right now—the 6538 and then the Kermit, as well. The Rolex Kermit was released in 2003 for the 50th anniversary of the Submariner, and they’re no longer produced so they are sought after by collectors and differentiated by the green bezel. And we also have some other vintage GMTs—the 1675, the 5513 Submariner. Those are definitely targeted at trends in the market place. We have two Tudor Submariners, as well. Collectors are also now looking to Tudor, which you know is the sister brand of Rolex, for vintage watches. That’s because now some of those prices for vintage Rolex watches are out of people’s budget. I think that is going to be a trend that continues. I would say Breitling vintage watches are also very hot right now, and we have a nice selection. We have about seven or eight of them. We have a Split Second Navitimer and a Datora; the reference is 799. Those have been emerging as popular watches for collectors of vintage.

One Omega up for auction has the signatures of three astronauts. Can you tell us more about that one?

The Speedmaster Moonwatch, with meteorite dial, celebrates the Apollo/Soyuz mission, which was the first International Space Mission and brought together the U.S. and Soviet Union amidst the Cold War. The astronauts wore Omega Speedmasters on the mission, so that’s a pretty big deal, and the three astronauts that manned the space mission signed the inside of the Omega box for this particular watch. Their signatures are also engraved on the case back, as they are for all of these models, but for this timepiece they actually hand-signed the inside of this presentation box, so it’s a really special and unique chance for someone to own this timepiece.

Of the newer brands, what are you looking forward to seeing perform?

The Richard Mille in pink gold with diamonds on the case. It’s extra-flat, so it’s very wearable and it’s a very recent timepiece—within the last eight years or so—and it’s semi-skeletonized. It’s also very light as many Richard Milles are. It’s the RM16, and that’s at $65,000 to $80,000.

What kind of clocks and pocket watches are available?

We have an Angelus weather station, which is quite cool. It was retailed by Tiffany & Co., and it’s signed on the middle dial, which also has the clock with a complete calendar. We have three lots of multiple purse watches. Most of them are made by Movado—those are unique and very different. We don’t offer those very often. We have an Hermès World Time Desk Clock second edition—there’s been two editions made, and the date is in Italian. It’s quite cool for someone’s desk. We don’t have too many pocket watches in this sale, but we do have a nice 18-karat pink-gold five-minute repeater open-face pocket watch, which is the rarest type of repeater, from Patek Philippe. It’s estimated at $8,000 to $12,000, but it’s starting at $5,000. So if you can get in on the opening bid, that’s a great deal.

What are some of your personal favorites from the lot?

Definitely the Patek Philippe 5990, the modern Nautilus that’s offered. We also have a Panerai 671, which is the Bronzo model. Those are very unique because all of them age differently. They get a patina over time because the cases are made of bronze, so they start to get this certain green color. I would also say the 5513 we have. It’s in an extremely reasonable estimate, within $3,000 to $5,000. These are selling in the marketplace now for well over 10 grand in most cases. This one doesn’t come on a bracelet. It’s on a NATO strap, but it’s in really good condition, and that would be my third pick.

Which watches would you suggest for an entry-level collector?

Brands like Breguet—we have very complicated Breguets with calendars at reasonable estimates. So for someone that’s looking for a lot of watch for not so much money, that’s a great option. Some of the vintage Patek Philippes like the Calatrava would be good—you can’t go wrong purchasing one of those, and they’re for the most part under $10,000. Then we also have a really nice selection of different Omegas. We have Speedmasters, the 50th Anniversary Speedmasters, we have the CK2998—which released last year—and a lot of modern watches. For someone who is new to collecting watches, these are a safe bet.

What are some of your tips for bidding at an online auction?

You can track lots so you can see their progress throughout the two-week period that the sale is up. So that’s a good way to stay on top of a watch if you’re interested in one. For all auctions though, the best strategy is to wait until the last minute.