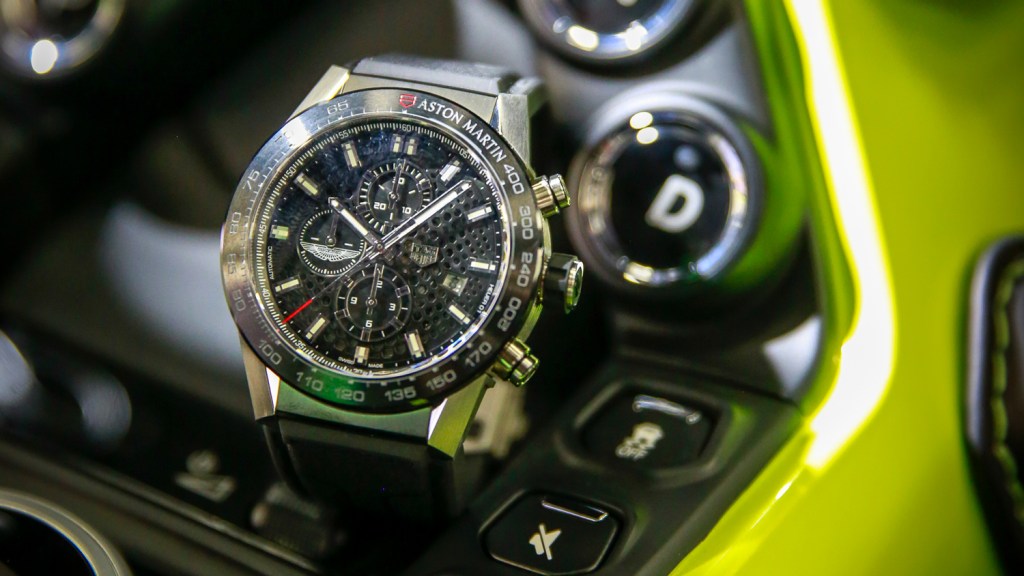 Tag Heuer’s long history in automotive racing should appeal to fans of Aston Martin—and both brands have strong ties to Hollywood. Aston Martin prides itself on being James Bond’s car of choice, while Tag Heuer skyrocketed to fame when Steve McQueen wore a square-dial Monaco on his wrist in Le Mans, the iconic ‘70s racing flick based on France’s most iconic motorsports competition.

For James Bond enthusiasts and Aston Martin owners alike, the Tag Heuer Carrera Calibre Heuer 01 chronograph should be cause for excitement. Jack Heuer created the Carrera chronograph in 1963, the same year the second James Bond film, From Russia with Love, debuted starring Sean Connery. And Tag Heuer took care to incorporate the British luxury automotive maker’s design details, rather than just slapping a logo on the dial (although it can be found on the black ceramic tachymeter dial and on a subdial at 9 o’clock). Lugs come shaped like the body of an Aston Martin and the skeletonized movement is visible beneath a hexagonal pattern on the black opalin dial that evokes the details of an Aston Martin Vantage grille. The sides of the 45-mm timepiece have lines reminiscent of the speed lines of a race track and the chronograph pushers resemble a car engine’s piston. The back of the Calibre Heuer 01 ($6,550) features sapphire window to view the in-house caliber 1887 movement, surrounded by black PVD steel on a matte black rubber strap and features 50 hours of power reserve.

The Tag Heuer Formula 1 chronograph comes at a considerably lower price point ($1,550), featuring a quartz chronograph—accurate to a tenth of a second—in 43 mm steel case with a notched steel bezel and an aluminum ring with a tachymeter scale. The indexes (in gray Super-Luminova), seconds hand, and Aston Martin winged-logo are designed in the automotive brand’s signature lime shade. “Aston Martin Special Edition” is also engraved on the caseback, along with the Aston Martin logo. The timepiece also features a black leather strap—a first for Tag Heuer’s Formula 1 collection—with lime topstitching.

While the Tag Heuer Carrera Calibre Heuer 01 will be the timepiece true Aston Martin enthusiasts will want to get their hands on, the Tag Heuer Formula 1 will be a nice option for a sportier, less precious timepiece or for those looking to match the hue of their lime-colored Aston Martin to their timepiece. Both special editions will be available in July.