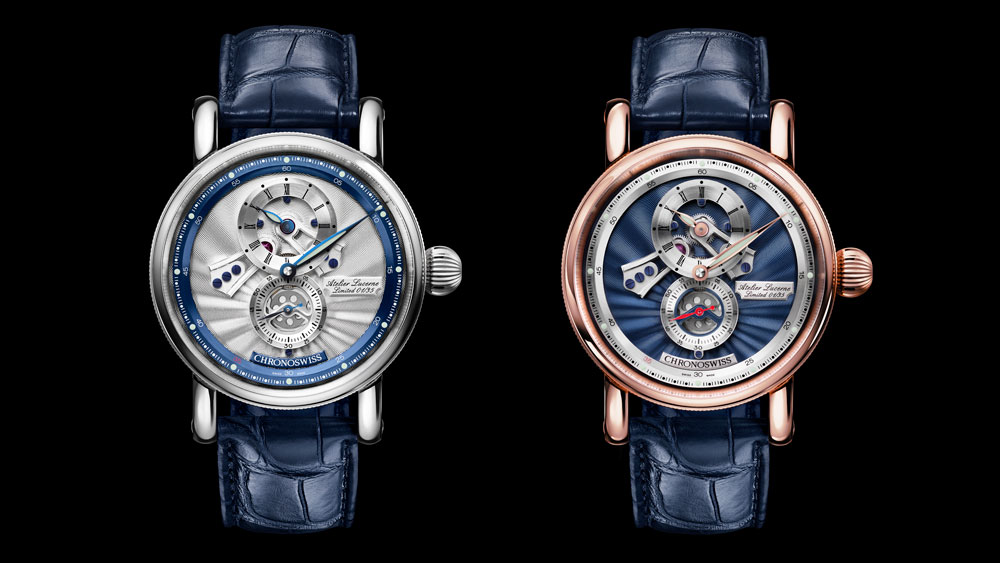 In celebration of both 35 years of business and 30 years of its flagship timepiece model the Regulator, Swiss watchmaker Chronoswiss has unveiled the new Flying Regulator Open Gear timepiece ($16,840 in 18-karat red gold and $8,110 in stainless steel) that is limited to just 35 pieces in each version. The Regulator was first introduced in 1988 and has since been the timepiece most associated with the independent watchmaker. Chronoswiss was bought in 2012 by Oliver and Eva Maria Ebstein from original founder, Gerd Lang, and the Regulator series is an independent collection led specifically by Oliver Ebstein himself. It continues to be the touchstone timepiece of the brand.

The new Flying Regulator Open Gear Anniversary Edition’s dials (blue on the red gold version and silver on the stainless-steel version) have been expertly hand guillochéd at the watchmaker’s workshop in Lucerne using a historical rose engine turning machine. The dial also simultaneously acts as the timepieces module board, where the train wheel bridges are mounted—the bell-shaped structures located beneath the hour indicator circle at 12 o’clock. The train wheel bridges have been angled and polished and are locked down by the aesthetically appealing and functional blue screws which keep the bridges in place on the dial. At 6 o’clock the dial and the bridge have been skeletonized at the height of the smalls seconds so that the wearer can see the second wheel in action.

Other design flourishes include hour and minute hands with Super-Luminova inlays on the hands and indexes for legibility in the dark, a red “35” marker on the minute scale in celebration of the watchmaker’s 35th anniversary, and hand applied individual limited-edition numbers. The 41 mm timepiece features the Chronoswiss caliber C.299 movement with 42 hours of power reserve, a skeletonized and rhodium-plated rotor featuring a Côtes de Genève finish, as well as bridges and plates with a perlage finishing. Both the 18-karat rose gold and stainless-steel versions come with a navy, hand-sewn Louisiana alligator leather strap.