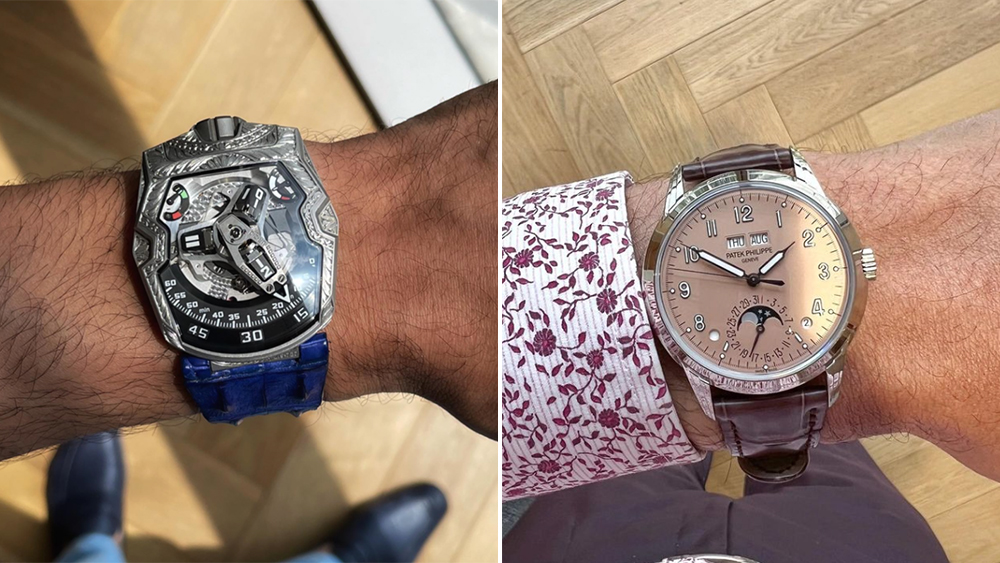 The first thing many people may notice about Ali Maghami when they scroll through his Instagram feed (@santa_laura) is that his collecting philosophy prioritizes breadth over depth.

“I have over 150 watches across all brands,” the Singapore-based collector tells Robb Report. “If I wanted to be very logical about it, then I’d probably be buying Rolexes and Pateks. But I bought across the spectrum. I have Rolex and Pateks, but I have [Jacob & Co.] and other brands as well.”

Even a cursory glance at Maghami’s feed, which is almost exclusively focused on wrist shots of extravagant timepieces paired with dress shirts in bold, bright patterns (florals, paisleys, 1960s-esque swirls), reveals the extreme variety of his range.

There’s a green-dial Patek Philippe Nautilus Ref. 5711, a Tiffany-signed Rolex Daytona, a diamond-encrusted minute repeater from Parmigiani and a pièce unique by Urwerk. The Harry Winston Opus 3 in diamond, the one by Vianney Halter, is there (“They made five examples of it, I have one of them,” Maghami says). So is a nutty-looking Cabestan (R.I.P.).

Audemars Piguets, Breguets, De Bethunes, F.P. Journes, MB&Fs, Richard Milles—the list goes on. And on. (Note the plurals.) While the collection veers to the contemporary end of the watchmaking spectrum, there is enough vintage (a c. 1930 Rolex Prince) and neo-vintage (Franck Muller) here to impress pretty much anyone into some aspect of horology.

Today, however, the focus is entirely on Maghami’s relationship with Jacob & Co. It’s late October and we’re in Taormina, the picturesque hilltop town on the east coast of Sicily where the brand is staging its first-ever press trip, to celebrate the debut of its Opera Godfather 50th Anniversary timepiece, a $500,000, 50-piece limited edition equipped with a triple-axis tourbillon and a music box that plays the theme of The Godfather. Maghami, an executive at a logistics company in the shipping sector, is one of a handful of collectors who snagged an invite.

During a lunch break at a restaurant in Taormina, Maghami sits down with Robb Report, and shares his story.

“When I was 23 or 24, I started buying things that, at the time, I could afford,” says Maghami, now 45. “I started with very basic watches: Breitlings, Seikos, all from retailers in Singapore.

“I always bought things because I had a passion for them,” he adds. “I never thought, what’s it going to be worth tomorrow? I said to myself, I’m working really hard and if I’m doing really well, I’ll go and buy a watch to reward myself.”

In addition to rewarding himself, Maghami has also rewarded his suppliers. “I’ve never sold a timepiece,” he says. “That’s because my relationship with watches is purely emotional. And that has helped me with my relationships with retailers, because I don’t flip them. I don’t betray their trust.”

About a year and a half ago, he bought himself the Jacob & Co. Opera Godfather minute repeater (featuring Marlon Brando’s mug on the dial). It joined two other Jacob timepieces—the Astronomia (“the blue one”) and the Twin Turbo Furious—already in his collection.

“I thought it was quite poignant to wear the Godfather watch here,” Maghami says, pausing to allow a band of Italian musicians to sidle past, playing “Volare.” “What I love about it is its design; it’s very pretty to look at. Every social occasion I have been to and I’m wearing a Jacob, people ask me, ‘What are you wearing? Tell me about that watch.’

“It’s such a conversation starter,” he adds. “I have been on an airplane and the guy next to me said, ‘Excuse me, sorry to disturb you, but what is that watch you’re wearing?’ I never get that reaction wearing a Rolex or Patek even. Don’t get me wrong, Rolexes and Pateks are nice but not very exciting. Are you buying more with your heart or your brain? Jacob is a watch you buy with your heart. And you always love it.”

Maghami is ambivalent about holy grail watches (perhaps because he owns so many of them). “The thing about holy grails is that everyone wants them, and so they lose their meaning,” he says.

Cue the 50th-anniversary edition of the Godfather watch. Is Maghami interested in buying it?

“I’m thinking about it,” he says. “I was just taking photos of the case. It’s a nice homage to the 50th anniversary of what is a cult, not only for people our age, but younger people. And I don’t think it’ll end, it’ll live through time.”