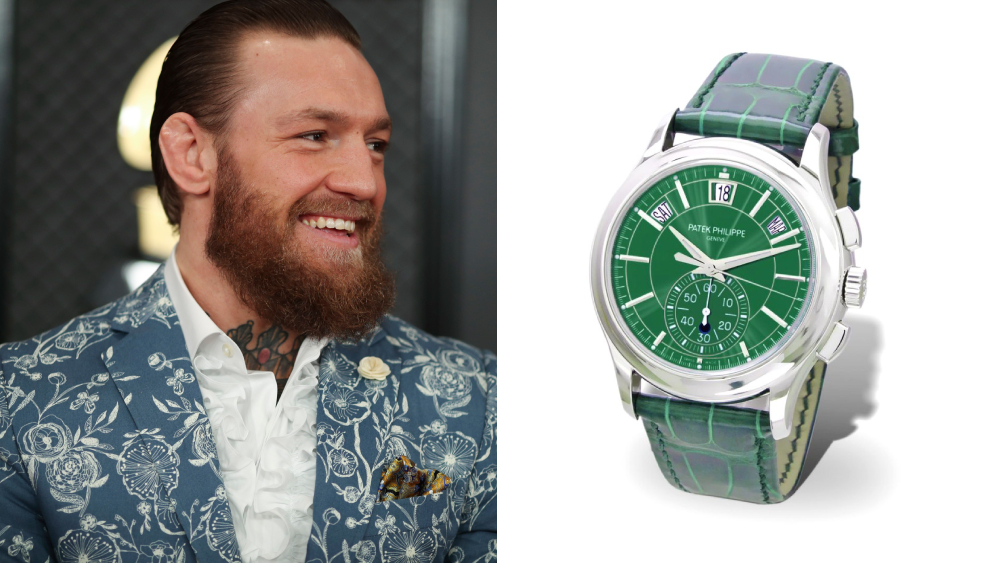 Conor McGregor knows a good timepiece when he sees one. Arguably Ireland’s most famous athlete, the MMA superstar’s latest addition to his considerable collection is a celebration of Dublin and one of its most historic jewelers.

Produced for the 150th anniversary of Weir & Sons, the Patek Philippe Annual Calendar Chronograph Ref. 5905P is a limited-edition with only 25 examples ever produced. McGregor managed to make one his own for a cool $100,000. The special run was also made in part to acknowledge the 50-year partnership between Patek Philippe and Weir & Sons.

“They are simply one of the best watchmakers in the world, and the Patek Philippe Annual Calendar Chronograph Ref. 5905P is a remarkable timepiece,” said Chris Andrew, director of Weir & Sons.

New watch alert!!! #TheHulk Patek Philipe in platinum and honey comb green! With diamond and crocodile strap. 1 of just 25 made, and yes you guessed it. I’m number 12, certified. They will also never utilise this colour scheme again, such was the difficulty in levelling it out all through the dial. Incredible! 25 of these only made and all specifically for Ireland’s Weir and sons jewellers. Due to their long standing partnership with Patek, but more so their great year of sales for the brand. In other words… my purchases lol. The first time in Weir and Sons rich history to be bestowed with such an honour, and it’s truly been my pleasure 🇮🇪 @patekphilippe @weirandsons @crumlinboxingclubofficial

Symbolic of both the purveyor and of Ireland as a whole, the chronograph has a vibrant green dial and tonal alligator strap. The specific shade was chosen by Weir & Sons not only a nod to its homeland but also as a reference to the color of the company’s early watch boxes. The pure platinum case houses a self-winding, in-house caliber CH 28-520 QA 42H movement––with 45 hours of power reserve––and incorporates an annual calendar complication as well as its titular chronograph. A sapphire crystal case back allows viewers a glimpse of its intricate inner workings.

The rare timepiece was first unveiled on April 11 of 2019 at a gala event held at Mansion House on Dawson Street in Dublin to commemorate the decades-long partnership between both parties. To make the festivities even more special, a selection of distinguished pieces featured during that year’s Baselworld was also flown in to make a mini exhibition of sorts to be enjoyed by a select number of guests.

McGregor didn’t purchase just any of the 25 watches available, but managed to snag number 12 as an homage to his Proper 12 line of whiskey. “25 of these only made and all specifically for Ireland’s Weir & Sons jewelers. Due to their long-standing partnership with Patek, but more so their great year of sales for the brand. In other words…my purchases lol,” McGregor said in an Instagram post showcasing his new acquisition.