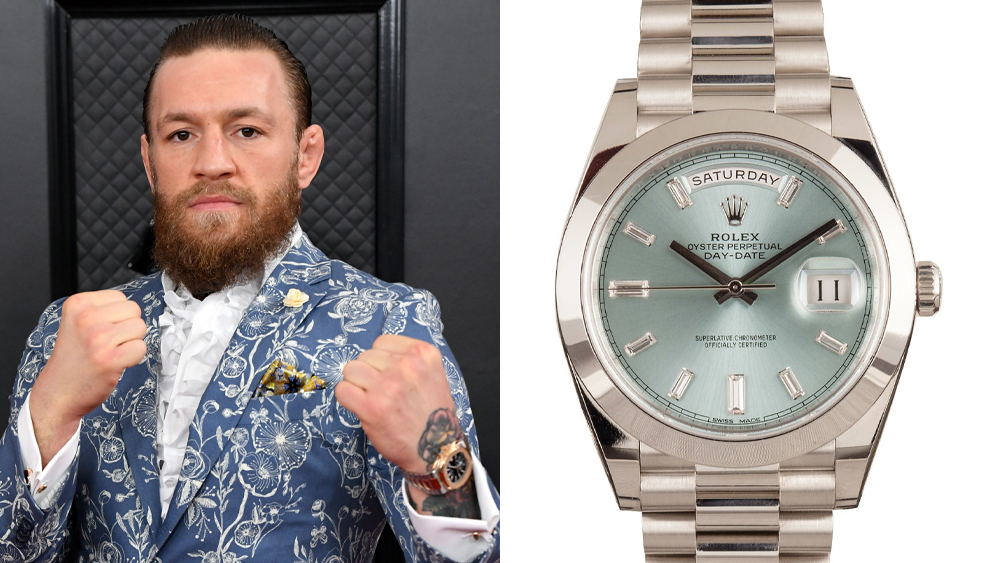 Conor McGregor just did the ultimate flex while he was actually flexing. The former UFC Champion completed a high-octane boxing sesh with a $50,000 Rolex on his wrist.

McGregor’s not-so-humblebrag first surfaced on Monday when the Irishman shared a workout video on Instagram. During the minute-long clip—which has had 6.5 million views so far—the MMA star did a series of bare-knuckle pinpointers—all while a platinum Day-Date glimmering on his left wrist tried to steal the show.

The platinum Day-Date is a knockout timepiece that collectors can typically find on the second-hand market for anywhere between $35,000 and $50,000. McGregor’s particular model features a case and President bracelet crafted from the durable precious metal, which is thankfully strong enough to take a few hits.

But, the iced-out blue dial is the real MVP here. This pale blue colorway is exclusive to platinum models and unequivocally striking. Protected by a scratch-resistant sapphire crystal, the smooth face features 10 baguette-cut diamonds that were individually selected and hand-set by the expert gemologists at Rolex.

Focus on the task at hand with Bare knuckle pin pointers.

Powered by a chronometer-rated caliber 3255 automatic movement, the timepiece packs a 70-hour power reserve and is water-resistant up to 328 feet (100 meters). Its built to last, which may explain why McGregor wears it with such confidence while sparring at the gym.

The platinum timepiece is not a new addition to McGregor’s collection. Back in 2017, the UFC champ posted an image of his chrome-colored watch to Twitter when, once again, he was en route to a sparring session.

Of course, with a net worth of around $110 million, the 31-year-old has more than a few rarefied watches in his possession. None of which he is afraid to flaunt. He has previously been seen sporting a $90,000 Patek Philippe Nautilus, a $40,000 Rolex Oyster Perpetual Sky-Dweller and a $16,000 Breguet Classique in rose gold, to name but a few.

Still, the Rolex seems to be McGregor’s preferred sparring partner. Who can blame him? Rolex is the (heavyweight) King of Watches, after all.