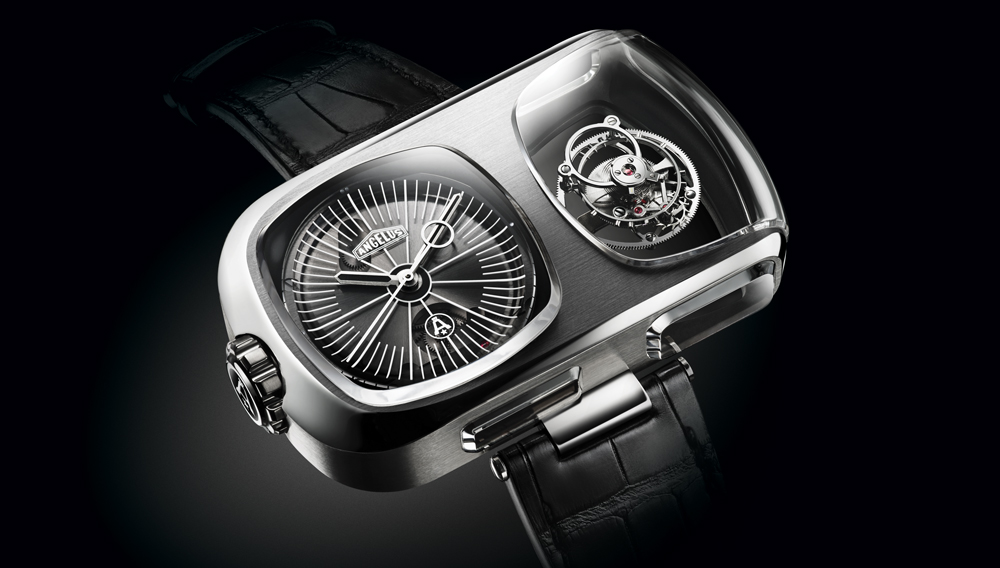 Reimagining the work of historical watchmakers becomes a modern industry.

“We see our approach as neoclassical,”says Dr. Sébastien Chaulmontet, head of movement development at Arnold & Son. “We developed this idea of studying John Arnold’s old watches—going to see them in the British Museum—not just to get technical solutions but to make modern watches.” Since relaunching the brand four years ago, Chaulmontet has become one of the lead proponents of what has been termed the neo-retro movement in watchmaking. Taking select elements from the brand’s namesake, the celebrated 18th-century watchmaker John Arnold, Chaulmontet reinterprets them with decidedly up-to-date constructions and finishes. The formula has produced a range of results at Arnold & Son. Some, such as the dramatically open-worked Time Pyramid and this year’s Constant Force Tourbillon, are visually stunning with subtle historical flavors. Other watches like last year’s CTB, with dead-beat chronograph and central seconds hands, are technically interesting but more conventional in appearance. The variety invites the question as to exactly where and how much of the founder’s legacy lives on in the company’s newer offerings.

Such considerations are hardly anomalous to a boutique brand like Arnold & Son. Today’s watchmakers seem to find the proposition of modernizing past greats irresistible, and indeed, some of the most compelling work in recent years has been in service of that goal. Consider the case of Ferdinand Berthoud, the noted 18th-century Swiss chronometer maker and academic whose name is unknown to all but the most historically minded modern watch enthusiasts. Karl-Friedrich Scheufele, copresident of Chopard, happens to be one of them, and this year he is establishing the Berthoud name as a freestanding watchmaking concern. In creating his first piece and thereby setting a pattern for the company, Scheufele has balanced the practical need to create something that will appeal to contemporary watch collectors with historical tips of the hat to Berthoud’s legacy. A tourbillon with a pillar-type architecture, a suspended fusée-chain regulating system, and a mobile cone indicating power reserve is meant to reflect Berthoud’s expertise in chronometry. The exterior viewing ports and typography are a strictly modern update to the master’s work. Scheufele has wisely chosen a neutral satin surface based finishing that helps the mechanism straddle the two eras.

The most shining example of casting a historical tradition in current terms is the revival of A. Lange & Söhne in 1990. The collaboration between Walter Lange and Günter Blümlein, a watchmaking industrialist of exceptional vision, essentially redefined the idea of a Lange timepiece and, as the first of several companies to restart in Glashütte, it had a profound impact on the broad conception of German watches. It was Lange’s legacy, but Blümlein’s industrial vision and resources—he was then head of IWC and Jaeger-LeCoultre—were indispensable.

The exterior of its most successful model, the Lange 1, took surprisingly little from the company’s history save a nod to the digital clock in Dresden’s Semper Opera in the style of the date window. The balance and utilitarianism of the design were nevertheless so effective, its influence can be clearly seen in the early designs of its emerging rival, Glashütte Original, just down the street. And the movement, with its characteristic three-quarter plate, gold chatons, and a hand-engraved balance cock, codified high-end German movement design across the category to an extent far greater than in the region’s 19th-century heyday.

Yet German watchmaking is certainly not the only high-quality tradition outside of Switzerland. For the last few years, the L. Leroy brand has been under development as an heir to the French watchmaking tradition that all but died in the 20th century.

Now owned by the Festina Group, owner of brands including Perrelet and Lotus, the reconstituted Leroy had devised a small number of marine chronometer–inspired models with relatively conventional movements. In the past 18 months, however, the brand has set a new direction that promises to be more evocative of Leroy’s long history. Two new pieces under development, a tourbillon and a simpler chronometer, are both built with elaborately decorated dials as well as pillars between the plates: common hallmarks of antique watchmaking, particularly the French variety. Other technical features include bimetallic balances, dead-seconds displays, and a direct impulse escapement. While these highlight the idea of chronometry—an important component of Leroy’s early history—they are clearly designed to whet the appetite of modern collectors.

Most of these companies that wish to tell the stories of their founders would be happy to have the inheritance of Breguet. Not only is Abraham-Louis Breguet a towering figure in historical watchmaking, but his contributions, which encompass both design and mechanics, render perfectly in contemporary offerings. The Breguet wristwatch with fluted case and silvered guilloche dial evolved in the mid-20th century and was perfected as a miniaturized version of the master’s (sometimes complicated) pocket watches in the 1980s.

To their credit, Swatch Group, the current owner of the company, has chosen not to rest on Breguet’s considerable laurels. The Tradition collection, a concept envisioned by the late Nicolas Hayek Sr., has grown into a multipronged family that espouses an informal company slogan to create watches as Breguet would have done. These pieces turn the Breguet formula around, swapping the traditional dial for a modern, open-works layout. Instead of conventional Swiss finishing, the movement utilizes an old-style grain finish and antique bridge shapes. More recent pieces—such as the chronograph and minute repeater presented this year—have pushed the envelope even more, creating a laboratory for alternate geometries and technical solutions in the various complication fields, thereby capturing a certain experimental quality that is evident in early Breguets. “We don’t necessarily put more high technology into our Tradition watches, but we do it differently,” explains Marc A. Hayek, Breguet’s current CEO and president. “The idea is that they shouldn’t be like other watches in Switzerland.”

At Arnold & Son, however, Sébastien Chaulmontet quickly realized he did not have the natural resources of a Breguet. “Even my mother, who is not into watches, appreciates the beauty of antique Breguets,” he says. “The work of John Arnold, on the other hand, is completely technical. He experimented with some 40 different balance configurations, yet in the most authoritative book on him, which is about a thousand pages long, every watch looks almost the same from the front. Only a nerd could appreciate a thousand pages of the same watch!” This understanding informed the company’s new approach to the brand: Whereas the previous owners had pursued a contemporary, occasionally sporty look, Chaulmontet and his team wanted a greater connection with the historical Arnold without the drawbacks of a close reproduction.

“I’ve always thought Arnold was about hardcore mechanics,” Chaulmontet explains. “We wanted to take things from Arnold and his son John Roger, but also to make them modern, as in three-dimensional.” While many of the most recent Arnold & Son watches have been designed with visible mechanics, Chaulmontet hit on a style with 2012’s TB88, a watch with a distinct architecture that presented the whole power train of the timepiece as a symmetrical structure. The Time Pyramid, presented the following year, further elaborates on the concept. Sapphire front and back crystals impart transparency inspired by antique British skeleton clocks, enabling a clear view of the energy transmitted from twin barrels, through the gears, and to a centrally positioned balance and escapement.

Chaulmontet becomes much more animated when talking about his latest project, the Constant Force Tourbillon, which he sees as the culmination of the brand’s current direction. In another symmetrical design, the energy is visibly directed through a robust constant force device that powers the tourbillon, all of which add to the chronometric performance of the watch and its ties with John Arnold’s legacy. “The watch is much closer to his spirit,” says Chaulmontet. “It is very complicated, as all old chronometers were. It shows where we are going.”

Arnold’s legacy, however, is not the only piece of watchmaking history with which Chaulmontet is contending. The company recently purchased the rights to the Angelus brand, a 20th-century maker of mid-priced chronographs, repeaters, and eight-day movements (used by Panerai, among others). But although Chaulmontet has been a longtime collector of its vintage watches, he decided to forgo creating similar timepieces in favor of a more extreme theoretical exercise. U10 Tourbillon Lumiere, the Angelus debut released this year, is a mix of contemporary 1970s-inspired design and modern complicated watchmaking, a combination created entirely by imagination. “The idea is that this is what Angelus, which was always a daring company, would have been making had it survived,” says Chaulmontet, who plans to extend his alternate reality for Angelus back into the art deco period in future models. Like any complex vision, the direction for both Angelus and Arnold & Son will not always please everyone, a fact that is freely acknowledged by Chaulmontet. “Some people see it as a negative; I see it as a positive. We like to respect the past, but never copy it.”