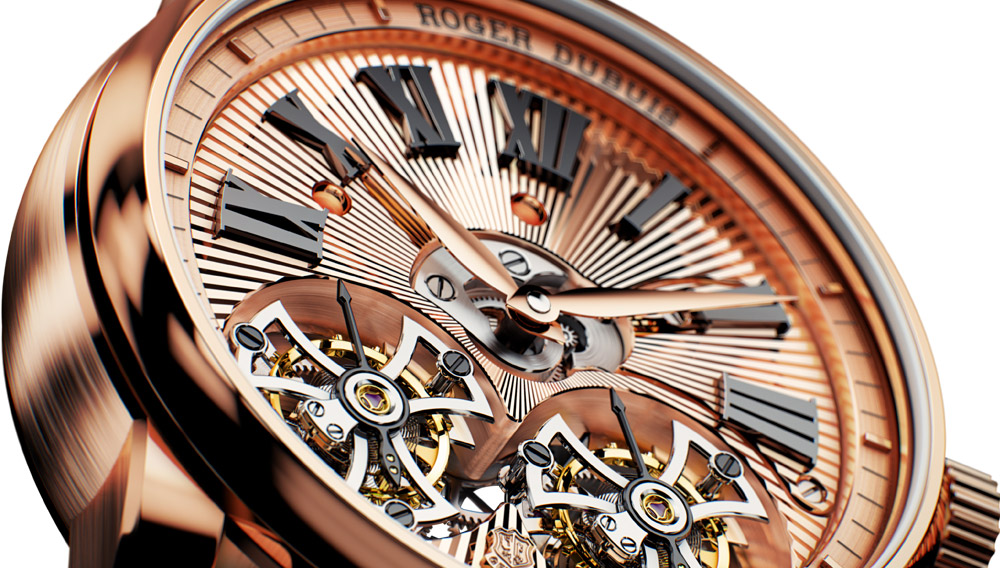 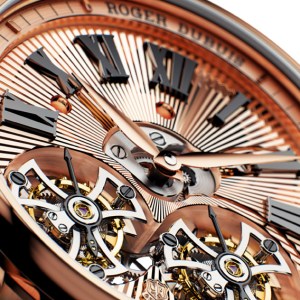 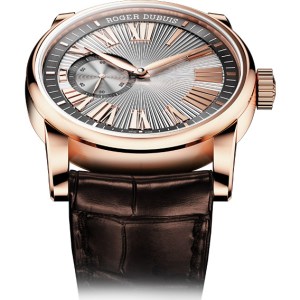 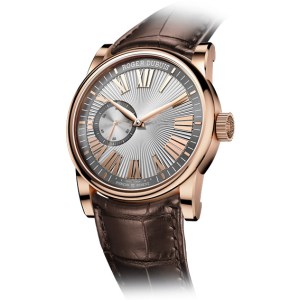 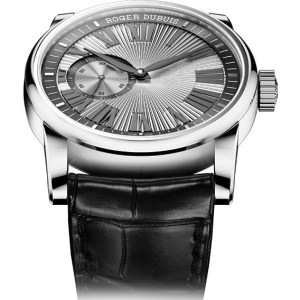 Since its founding in 1995, the Geneva-based watchmaker Roger Dubuis has had an on-again, off-again relationship with its namesake. Today, several years after the departure of his volatile cofounder, Carlos Dias, and the brand’s takeover by Richemont, Roger Dubuis himself is once again associated with the company in an advisory role. This year’s novelties revisit Dubuis’s original Hommage collection, with designs closely tied to the watchmaker’s roots in Geneva.

At this year’s Salon International de la Haute Horlogerie, we spoke with Gregory Bruttin, the brand’s director of R & D and watchmaking, about the new Roger Dubuis watches. As a young watchmaker, he worked under Dubuis himself. Bruttin is also the designer of the Quatuor, an unorthodox timepiece with four balance wheels that the brand unveiled last year. A 12-year veteran of the company, Bruttin is a direct link between its past and future.

We have a very classical automatic piece with small seconds and a chronograph, both of which use the first generation of our new movements. We also have a special flying tourbillon with a lacquered dial that is a tribute to Mr. Dubuis. It is a limited edition of 208 pieces, which was his student number at the Geneva Watchmaking School. Finally, there is the Double Flying Tourbillon, which has been reworked and given a very special guilloche pattern.

Do you use a traditional rose engine or a more modern machine?

The machine is very old. What makes it even more special is that we make the pattern on the actual baseplate of the movement. This pattern is very demanding because it is very precise, and a small scratch means you have to throw the whole piece away. You can also see a separate access plate that must be perfectly aligned to show off the pattern.

The original watches had many different numeral treatments. Have roman numerals become a permanent part of the collection?

The roman numerals are found on the Excalibur and Velvet collections, so they are really a signature of the brand. It’s important for us to have consistency now, which is a little different from the way we worked in the past.

The brand originally developed a double-flying-tourbillon design many years ago. What would you call out technically about the new piece?

Here you see the story of the differential [intended to average the rates of multiple balances]. The original Double Tourbillon was our first experiment with the idea. We improved it with Quatuor, after testing a number of different ideas. Now you see the new one. It’s a little bit different, especially in the shape of the gear teeth. We started the process in 2003. That was a long time ago, so we now have a lot of experience.

What is Mr. Dubuis’s role at the company these days?

He is the godfather, or at least my godfather. I share a lot with him to create a new movement. For this product, he really liked the idea of doing the guilloche right on the movement. It really shows respect of tradition and the story of the watchmaking industry. He really is a living memory of watchmaking. Sometimes I have to search though the archives to find an old movement. It’s much easier just to ask him.