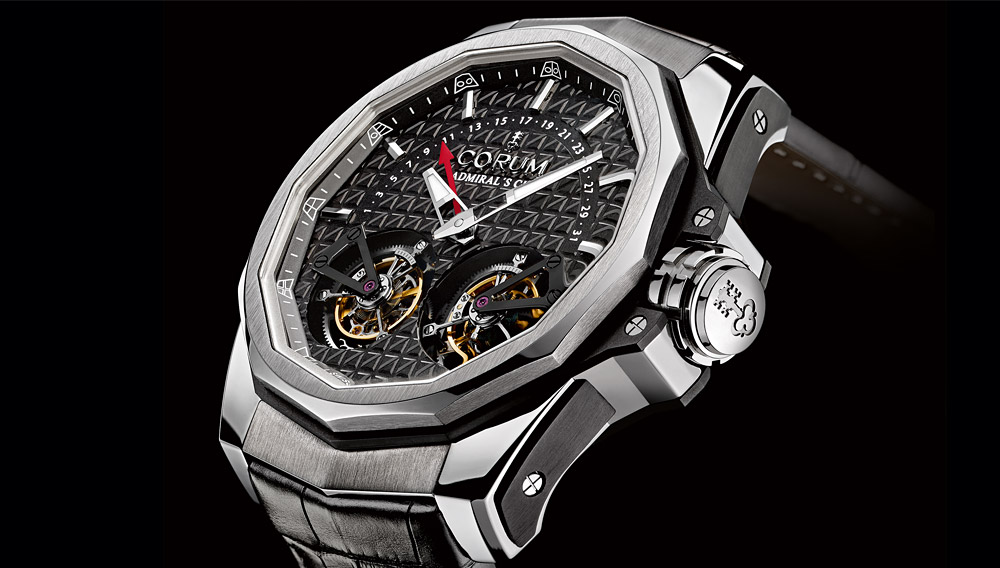 The Swiss watchmaker Corum has added new timepieces to its venerable Admiral’s Cup collection, including the Admiral’s Cup AC-One 45 Double Tourbillon. The line has a heritage almost as long as that of Corum itself, having debuted just five years after the brand’s founding in 1955. The new watch carries all of the visual hallmarks for which the collection has become known, including its 12-sided bezel and a dial marked with nautical pennants rather than arabic or roman numerals to indicate the hours.

Though the watch’s appearance draws inspiration from previous Admiral’s Cup models, the new movement is completely original. The most prominent feature of this new calibre (the watch’s namesake) is the parallel tourbillons visible through the lower portion of the dial that work in tandem to regulate the watch’s timekeeping. Another function unique to this movement allows the wearer to more easily adjust the time by instantly sending the minutes hand to the nearest hour position with a press of the crown. Finally, a retrograde date display runs in an arc along the dial from 9 o’clock and employs a bright-red arrow to indicate the day. Corum is offering the AC-One 45 Double Tourbillon in two case materials: a titanium version priced at $76,000 and an 18-karat-red-gold version for $96,500. (www.corum.ch)