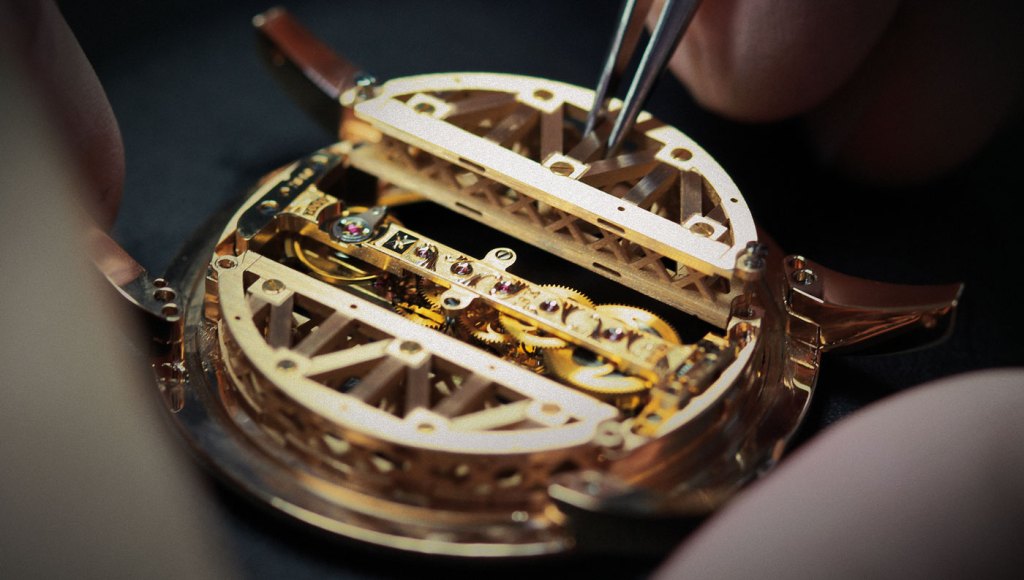 Designer Dino Modolo adds a personal touch to one of his favorite watches.

When Corum released the Golden Bridge in 1980, Dino Modolo was dumbfounded. At the time, the young designer was helping Corum to develop a practical method for manufacturing the Ingot, a watch with a gold bullion dial. (Because ingots were shipped from the mint in irregular thicknesses, they were difficult to fit inside uniform rectangular cases.) Modolo was captivated by the Ingot’s outlandishness, the way it was marketed as an insurance policy for the wrist. But the Golden Bridge—a totally exposed linear movement encased in clear sapphire—belonged to “another world, without reference to anything ever done before,” he says. The combination of “sophistication and simplicity” has shaped him ever since. Now he’s reshaped the Golden Bridge in turn, with the new Golden Bridge Ronde.

Modolo was certainly not the only person flabbergasted by the Golden Bridge. The timepiece was first conceived around 1975 by the self-taught watchmaker Vincent Calabrese, who sought to turn horology inside out. Calabrese resented the attention people paid to enamel dials and precious metal cases. He thought that the true beauty of any timepiece was the movement, and he believed that movements should be designed for visual effect, fully visible to the wearer.

Some of Calabrese’s movements were formed in the shape of animals. Others were shaped to resemble people’s initials. His most radical timepiece, however, adapted the traditional baguette, which he elongated by setting all the gears in a single line, miniaturizing components so that his slim-jim mechanism could be transparently encased to fit on the wrist.

The Horlogerie Spatiale (as Calabrese called his creation) won a gold medal at the 1977 Salon International des Inventions de Genève and was promptly acquired by Corum. Three years later, a production model dubbed the Golden Bridge was launched to great acclaim at the Basel watch show. “There was no water resistance and there were technical problems,” recalls Modolo, “but if I’d had the money, that’s the watch I would have bought.”

Instead, Modolo explored the potent combination of sophistication and simplicity at other companies, especially Vacheron Constantin, where Claude-Daniel Proellochs enlisted him to help relaunch the brand in 1987. “Vacheron had very clear DNA,” Modolo explains. “Their watches were not highly complicated but were very elegant and very slim.” Modolo’s technique was to absorb Vacheron Constantin’s character to such an extent that he felt free to create his own collections for the brand, designing a wide range of uncluttered watches over the next 13 years. “This approach works for any established brand,” Modolo says. “You need to extract the serum.”

Modolo was invited to redesign the Golden Bridge by Davide Traxler, the new Corum CEO, after Traxler asked him to analyze the brand’s recent product line. Modolo was especially critical of past Golden Bridge redesigns. “The watches were oversize and too thick,” he says. “They were creating a boring product out of an outstanding masterpiece.” Modolo proposed to start anew, accentuating the bridge rather than trying to buffer it. “What’s important,” he says, “is not to turn the Golden Bridge into a regular watch.”

Inspiration came from a realm far from horology. Modolo has close friends in San Francisco and he frequently visits the Golden Gate Bridge. The famous landmark’s crisscrossing girders, he realized, were the perfect structure to support Calabrese’s movement, emphasizing the three-dimensionality and letting in plenty of light from all sides.

Much as he has done with watch brands, he began his design process by absorbing the Golden Gate’s architectural DNA. He looked at contemporary photographs and also studied engineering drawings from the 1930s, internalizing the geometric relationships between surface and volume as well as the art deco styling. “Then I closed my eyes,” he says, “and created my own dream.”

In his dream, the Golden Bridge turned out round. He admits that it was partly a matter of practicality: Nearly 90 percent of the watches sold in this price category are circular. However, he was also influenced by the geometric contrast, in which the circular frame accentuates the movement’s elongated shape.