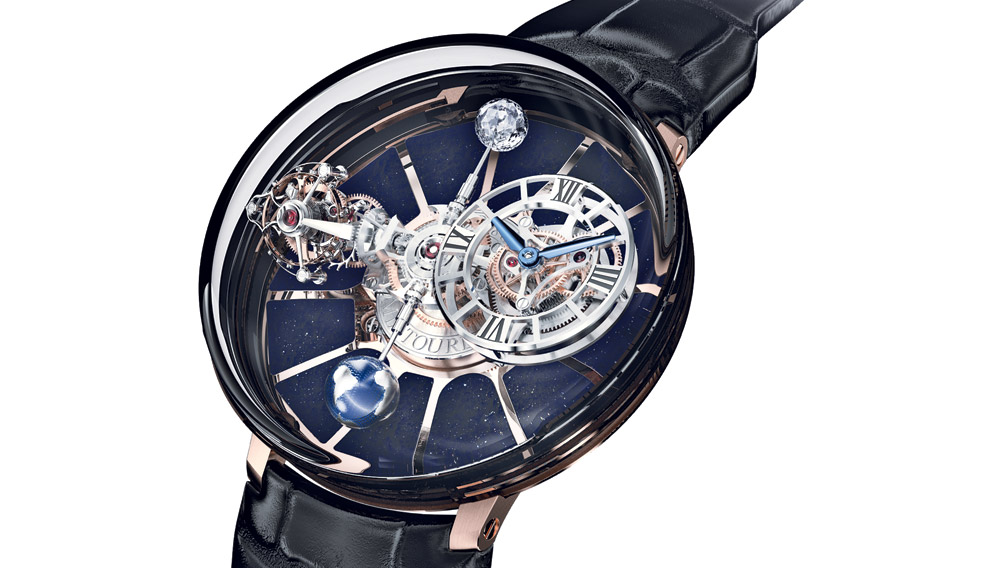 Jacob & Co.’s latest com­plicated timepiece, a celestial-inspired watch named Astronomia (pictured), is a far cry from the contemporary fare being produced by the Swiss watch industry. The whimsical new wristwatch features a triple-axis tourbillon, representations of Earth and the moon, and a floating dial—all of which orbit a central column beneath the domed sapphire crystal. “To me, Astronomia represents the Earth, space, satellites,” says Jacob & Co.’s founder, Jacob Arabo. “It’s a futuristic view.”

In contrast to most of today’s watch companies, which tend to embrace comparatively serious horological themes, Arabo has allowed the design of his latest pieces to be guided by his own imagination. His approach, which recalls the freewheeling designs that characterized much of the industry’s output a decade ago, apparently possesses significant appeal for present-day collectors: At the Baselworld watch and jewelry show earlier this year, Jacob & Co. unveiled a prototype of Astronomia, and word of mouth drew a number of prominent clients who placed orders on the spot.

Though Jacob & Co. has rarely manufactured its own pieces directly, the firm was an influential player during the watch boom that occurred in the mid-aughts. The Quenttin, launched in 2006, was equipped with a vertical tourbillon and massive sequential barrels that yielded a 31-day power reserve—features that have since appeared in watches by such brands as Hublot and Concord. By the last years of the decade, however, the financial crisis and Arabo’s own legal troubles forced the company to back away from its most daring horological endeavors.

Jacob & Co.’s return to the forefront of mechanical watchmaking is the result of its collaboration with Studio7h38, a design and prototyping specialist near Neuchâtel, Switzerland. Luca Soprana, the group’s head of research and development, has cultivated a rapport with Arabo, and together they are able to translate Arabo’s ideas into functional reality. “I’m always asking Luca if different things are possible,” says Arabo, “and he always comes back to me saying, ‘I don’t know, Jacob; I think I can make it work.’ ” Their first joint project was the Epic SF24, a travel watch based on the old flip-board train-station displays that debuted last year. The deceptively complex timepiece was completed in just two years.

Soprana, who cut his teeth at BNB Con­cept (the firm that engineered the Quenttin for Jacob & Co.), distinguishes his work from earlier modernist efforts by incorporating traditional constructions into the movements. Surprisingly, he seems to have found an ally in Arabo’s offbeat imagination. “At first we thought he was crazy,” recalls Soprana. “But then we realized that he was trying to transform traditional watchmaking, just like we were.”