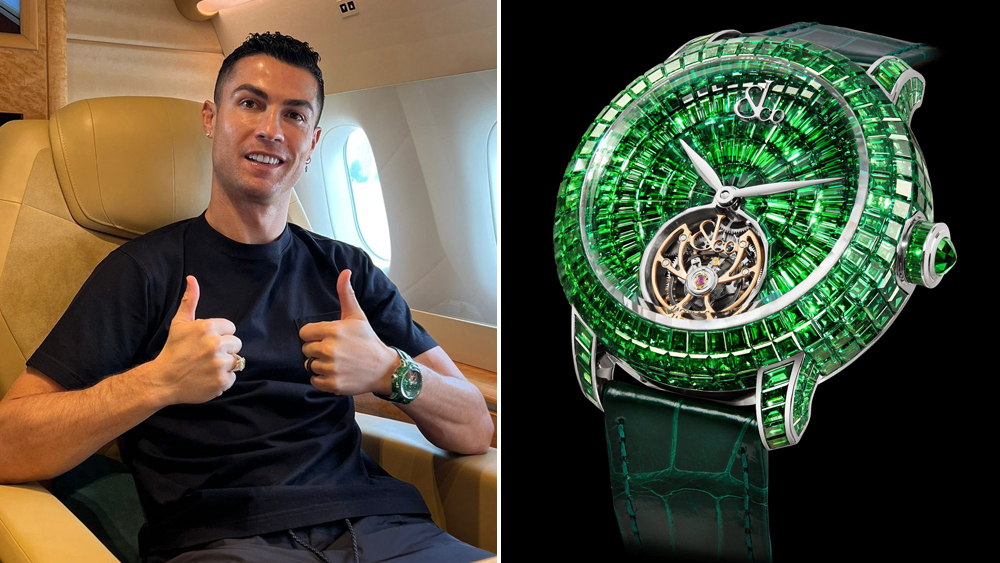 We wouldn’t be surprised if Cristiano Ronaldo’s latest watch leaves more than a few collectors green with envy.

The latest head-turning perk from the soccer legend’s partnership with Jacob & Co. is the one-of-a-kind Caviar Flying Tourbillon “Tsavorites.” The dazzling custom timepiece gets its name from the green gemstones that cover almost all of its surfaces.

The watch’s striking hue was chosen as an ode to Saudi Arabia, the country Ronaldo moved to earlier this month after signing with the soccer club Al Nassr. The watchmaker could have easily used emeralds to attain its verdant color, but instead opted for tsavorites, which are less expensive than their cousins but about 200 times rarer.

Some 388 high-quality, baguette-cut tsavorites were used to cover the watch’s 47 mm 18k white gold case, bezel, face and crown. That may seem a bit overkill, but it gives the watch a striking all-green look that’s hard to forget. The only part of the watch that isn’t covered in the stones is the strap, but even that is made from green alligator leather.

The watch is powered by the caliber JCAA43 movement, which has bridges specifically designed to accommodate the gem setting. The hand-wound caliber drives the hours, minutes and 60-second flying tourbillon at 6 o’clock. It consists of 216 components and has a 42-hour power reserve.

If you’re looking for something green to wear on your wrist, you’re out of luck, though. The Caviar Flying Tourbillon “Tsavorite,” which Hypebeast reports is worth $780,000, is only for soccer’s all-time goal-scoring leader.

Fortunately, Jacob & Co. is selling a number of Ronaldo-themed timepieces for his fans. Late last year, the company unveiled a pair of watches it designed in collaboration with the forward—the rose gold Flight of CR7 and the stainless-steel Heart of CR7. There are two variants of each watch—one with diamonds, the other without—each of which is limited to 99 pieces and priced between $34,988 and $181,331.