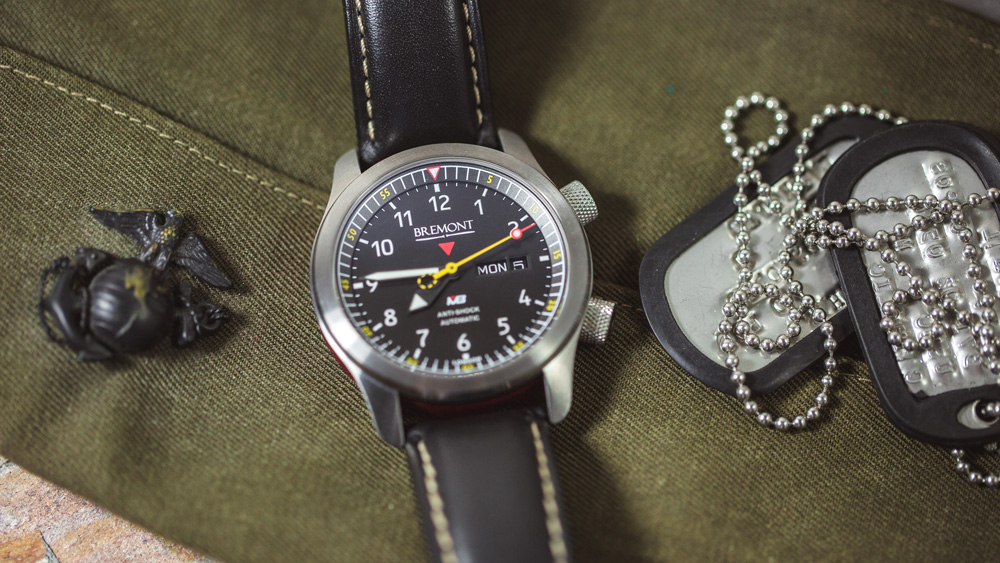 Crown & Caliber, an Atlanta-based pre-owned watch e-tailer, has procured a rare Bremont MBI—a timepiece only available to pilots who have ejected from a Martin Baker airplane ejection seat. Most flight training sessions don’t result in an airplane ejection, but on March 4, 2008, Iraqi Freedom veteran Jim Berenthal found himself in a life or death situation in training session with a younger pilot. A steering failure upon landing forced Berenthal to eject himself and his student, while the plane was accelerating at 120 knots in an attempt to get airborne again. Both Berenthal and his student survived and two years later Berenthal purchased his badge-of-honor Bremont MBI.

“We love celebrating any watch with a unique story, and you don’t get much more unique than someone with a Bremont MBI,” says Crown & Caliber’s chief marketing officer, Jason Allen. “Jim wants to sell this watch and do some good that’s going to last in his family and do some good in the community.” Berenthal came out of his ejection ordeal disabled and was forced to medically retire. The sale of his coveted timepiece will go towards helping his family of five and 10 percent of the proceeds will go to benefit the Eastern Pregnancy Information Clinic, a non-profit devoted to helping women with crisis pregnancies, a cause dear to the Berenthal family.

Jim Berenthal’s Bremont MBI is on sale at Crown & Caliber and retails for $55,000. Below Berenthal recounts his harrowing experience and how it led to his discovery of the Bremont MBI.

How did you ended up ejecting from a plane?

It was an un-annunciated nosewheel steering failure. I was flying with a student and we took off and throughout the mission it was a great flight, but once we hit the ground we started to run off the runway. Initially, I thought he would put in a correction. I was shadowing him, and I said, “What are you doing?”, and he said, “It’s not me, sir, it’s the controls.” I ejected once we were going off the runway, and I realized that I couldn’t fight the airplane anymore, I couldn’t do anything to fix it.

What kind of plane were you flying that day?

I ejected from, the T-45 Goshawk. It’s the same jet that the Red Arrows use for their demonstration team, which is the British version of the Blue Angels. We use it for an advance jet trainer. We take this thing to the ship, we fight with it, we drop bombs with it, we do all sorts of advanced strike training with it.

Can you describe what it is like to eject from a plane?

It’s a pretty awful life or death experience. You go from being in a nice, warm cockpit to being thrown out into the cold elements. We were accelerating through 120 knots to try to get airborne again, and I realized that there was no way I was going to be able to get the aircraft  off the ground again. I felt like God said, “live or die.” I pulled the handle. I was thinking, Is my parachute going to open? Will I ever see my kids again? I broke my back and I knew it. Once you pull the handle, my gosh, nothing can prepare you for that. We do ejection-seat training, and we do parachute falls and stuff like that, but that shock…we don’t actually train in that environment for obvious reasons. Prior to that, I had not even thought about ejecting, but once I did, I was thinking to myself, I cannot believe I’m pulling this handle.

How would you describe an ejection seat for those that haven’t seen one?

These are metal pieces of equipment, they’re heavy. You have a couple of cushions on them, but there’s eight places to strap in. You have straps that go around your ankles, your thighs, around your waist, and over your shoulders, so you can roll inverted and not go out of your seat. The ejection handle itself is yellow and black, which symbolizes danger. Anything that’s yellow and black in an airplane means, “Think before you touch.” So you’ve got that sticking between your legs, and it’s your ticket to living. A lot of guys who have ejected will say it’s the longest .02 or .04 seconds of their lives. In the T-45, there is a 0.00 second delay, so as I pulled that in the cockpit, I was gone.

Describe the immensity of that moment.

As I’m pulling up with my left hand towards my jaw, my back is being just crushed by the immense amount of g forces that are traveling through my body and up through my head. Today I’m an inch and a half shorter than I was, and that’s pretty standard. An inch to about an inch and a half is about what each guy loses, when they eject. And a lot of people will, unfortunately, break their back, but that’s better than the alternative, right?

You’re student ejected without a scratch. How did that happen?

He was in the perfect position to eject. As soon as I pulled the handle, it ejected him immediately. We had flown together a couple of times and his legs had gotten in the way. In the debriefs I told him, “The next time you fly with me, get your fat legs out of the way!” I was kidding, because I wasn’t getting full on the controls and we were doing a very aggressive maneuver in flight. He knew what I wanted when I took the controls of the airplane and got into the perfect ejection position, not knowing we were going to eject, but giving me full throw on the controls so I could try and fix it. He was in the perfect position to eject, that’s all I can say.

How did you feel about getting back up in the air after you ejected?

I wanted to fly the next day, but there’s a process. Have you ever seen Top Gun? I had to stand in front of what we call the “Big Long Table”, which is where all the people who are above you sit to conduct these investigations—you have to go through three of them. Once I received my final clearance to fly, I got back up in the air. I flew 10 times after the accident until I realized something was wrong. I was getting dizzy and wasn’t able to take the vibrations. I could barely walk back from the flight line after my tenth flight. Eventually, we realized there had been some traumatic brain injury.

When did you first learn about the Bremont MBI?

When I got my Martin Baker tie and clip for ejecting from a plane. I looked at their website and that’s when I realized there was this watch out there. I thought about it for a couple years, before I finally pulled the trigger. I have a Martin Baker Tie Club ejection speed number, and I sent them a copy of that certification. I was very happy when I got it. It was a pretty expensive purchase, even though Martin Baker even subsidizes part of that watch.

Are you a watch collector?

I have probably 15 or 20 watches. What I like to do is I like to buy watches that are lesser known.  I have two Tourby Pilot 42 millimeter watches in rose gold and stainless steel, and those were specially made. I have three Bulova Accu Swiss chronographs (two Murren’s and The special edition Telc GMT Triple Register panda dial). I have a Maratac large pilot automatic, the 2014 edition, which I think is much better looking than the others. I have several Seiko automatics, including the Seiko 009 Pepsi Diver. I have the Victorinox automatic Macerik and I’m getting a Raymond wheel freelancer chronograph. I have a Landeron super compressor watch—it’s like a cross between a Longines Legend Diver and an Omega Seamaster. And I also have a Seagull 1963 mechanical chronograph—both that watch and the A 15 by Bulova are remakes or homages to the watches they built earlier for pilots. The A 15 was built for U.S. pilots during World War II. The 1963 was built for the Chinese Air Force. I just enjoy finding things that are within my budget that are really unique.