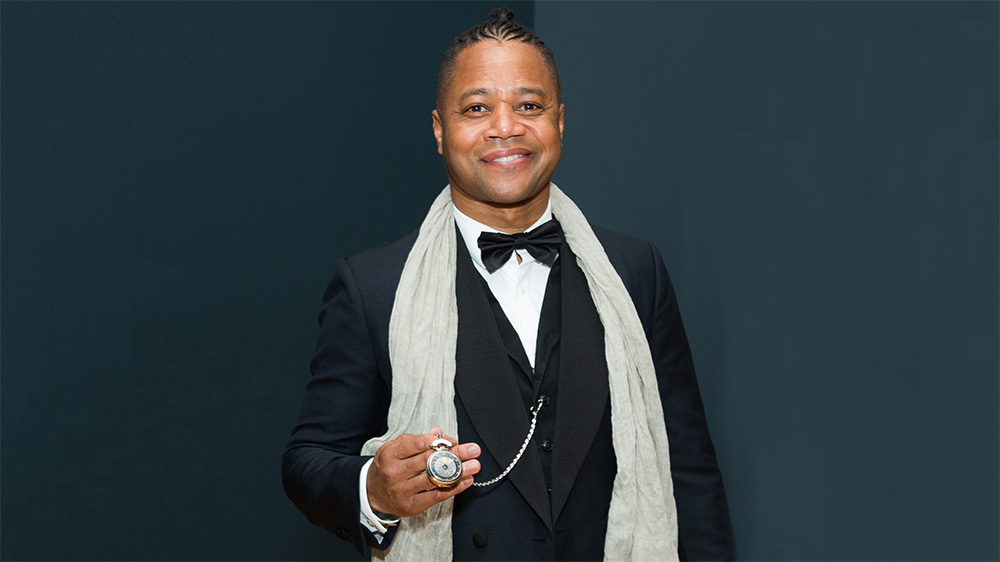 Time is a luxury in Cuba Gooding Jr.’s world. He recently did a stint as Billy Flynn in Chicago on London’s West End, and now through November 18, he is reprising the role on Broadway. This year also marks his first-ever directorial debut, Bayou Caviar, for which he also wrote the script and plays the lead role. When he sat down with us in New York City’s Chatwal Hotel, he had just come off a round of 11 back-to-back press interviews for his Broadway debut in Chicago, but his passion for his projects was as infectious and full of energy as if you were watching him reprise his Oscar-winning performance as the fired-up football player Rod Tidwell in Jerry Maguire.

Cuba Gooding Jr. fills us in on how he’s making time to pursue new dreams and the watches that have marked some of his most memorable moments.

You just came off of doing Chicago in London. What are you looking forward to about your New York turn in the musical?

Four months and 158 shows. It’s great. In 2013, I was on Broadway for the first time in The Trip to Bountiful with Cicely Tyson. It was a life-changing event, and it really woke me up as a filmmaker, let alone just an actor.

How did Broadway create an epiphany in your film career?

When you’re doing the same show over and over again, you need an emotional release. You need a distraction or you’ll go insane. So I wrote my first screenplay during that time. It was one of those moments in my career when I was awakened as a filmmaker to go to the next level. When I was offered Chicago on the West End London stage, I was like, ‘Well, I have to say yes, but it’s a musical. I have to sing!’ It literally scared the hell out of me. With The Trip to Bountiful, I was ready to get off the stage after five months. But when I finished Chicago on the London stage, I cried. I didn’t want to leave. So when they asked me to do six more weeks of Chicago on Broadway, I said yes.

Why do you think you enjoyed doing a musical more than a play?

I said to Tanya and the other stage directors, ‘I hope I never get tired of these songs because I’ve got four months to do this, and I love this musical so much.’ The third day, I stayed in my dressing room when I wasn’t on stage, and at the end of that show I said, ‘I’ll never do that again.’ After that, I stayed backstage for every single performance. Every time, I could hear the music again, again, again, and again. It informed my performance and the charisma of the character. I was moved, and it never got old.

Do you anticipate a different energy from the New York audience?

I do, I do. [Laughs.] The British are very proper. They warned me about it before I took the stage in London, but we whooped the hell out of those people! Will it be that way in New York? Yeah, I’m kind of feelin’ my Manhattan city.

Your directorial debut, Bayou Caviar, releases this year. What was the experience like for you?

I told people I’d rather direct than act. I didn’t know I’d feel that way, but having written screenplays and opening myself to that kind of storytelling technique, not just my own character but all of the characters’ journeys that come together to tell that story is infectious, I think. We as actors, we create a character and you surrender your performance as an actor, and then you leave for a year and you come back [when the film is ready to be released] and you hope the director understood what the hell you were trying to say and do. A lot of times you see the performance and you go, ‘Ugh! That’s horrible!’ But as a director, not only do you get to go into the editing room and interpret your performance but also everyone around you. I always say if you want to direct, you have to write because you have to know the journey of each character in each scene, where they came from and where they are going.

What did you learn from your directing experience?

The number one job of directors is to answer questions. Everyone has questions—from the hair people to the makeup people to the light department to props. They just want answers. If you don’t have the confidence to make a decision, it will cause anxiety on the set, and that’s never good. As a filmmaker, I have a vision, and I need the crew to trust me.

Although I was a first-time director, I’ve done 80-something films, and I’ve worked a lot with first-time directors who come into my trailer during lunch and say, ‘What do I do?’ So my trailer door was always swinging open, but this time it was the assistant director opening the door and saying, ‘Look we don’t have enough time. What do we do?’ I wasn’t surprised by that, but I was surprised by how easily I seemed to fit into the mold of getting things done. I didn’t know how much fun and how much of a drug problem-solving would be. It was intoxicating.

Time is obviously precious for you. Speaking of which, can you tell us about your watch collection?

Oh, yes! Look at this little baby [referring to his Longines HydroConquest]. I love it. Self-winding! I’m not doing anything but winding a watch. I think this is now one of my favorites. But I’m a Patek Philippe guy, first and foremost.

When did you get your first Patek Philippe?

My wife gave me my first Patek Philippe. When I first heard the history of watches and how Patek’s contribution to it is so profound, it made it special to me. It’s a Patek Philippe Calatrava dress watch. It has a black leather band with a thin white dial.

Where do you keep your watches?

It’s funny because people always ask me, ‘Where do you keep the Oscar?’ When I separated from my wife, we sold the house, and I took certain things from my closet and put them in briefcases that have locks on them—the Oscar was one, and my watches were the other.

How long was it before you bought a second Patek Philippe?

When I got enough dough to do it. [Laughs.] It was about two years.

Was it after a special moment of film?

I can’t remember, but it might have been after Lightning Jack. I had a little coin in my pocket, and that’s when I got myself another watch.

What was the first watch you ever bought?

It was Bertolucci. I actually have three of them.

How many watches do you have in your collection?

I have about 20. But I also have certain watches where if you went to a pawn shop, they wouldn’t give you any real money for it, but those are just as special as my Patek Philippe. For instance, the one I wore in Men of Honor, I stole that one from the props department. I still have that in a box in my closet. I also have the first Rolex Daytona that I bought, because my father used to have a Rolex. He had a gold Rolex because in the ’70s that was the stamp of richness. Mine is steel, though, because I don’t really like gold. I also have a Bovet Amadeo pocket watch.

How are you planning to take time to unwind after this big year?

I’m not! I’m directing another film that’s already in preproduction.