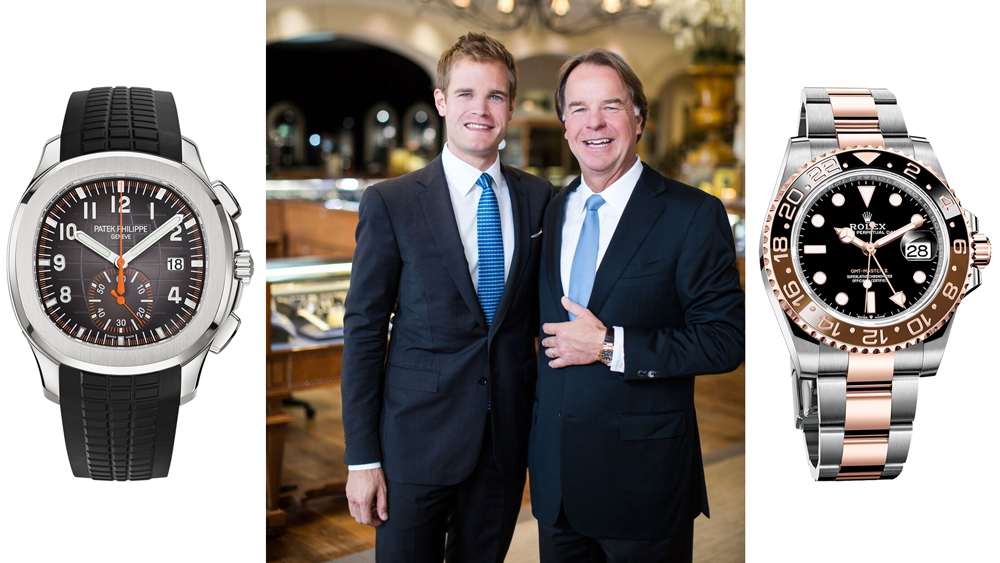 Over the weekend of June 16 to 17, Denis Boulle, the owner of fine jewelry and watch retailer de Boulle with two stores in Texas—a 15,000-square-foot emporium in Dallas and a smaller 1,500-square-foot salon in Houston—did something rather extraordinary.

He watched his 29-year-old son, Nick, compete in the 24 Hours of Le Mans, the world’s greatest motor race. He even invited a few clients to join him in France. “Everybody was blown away by the historical aspect of it—the size and scale,” Denis says. “It was epic.”

While this was Nick’s first trial at Le Mans (where he placed eighth in class and 12th overall), it was far from his first automotive endurance race. In 2017, the younger Boulle won the 55th annual Rolex 24 Hours of Daytona, earning a gold-and-steel Daytona timepiece and major bragging rights among his cohort of retailers.

“He was the first Rolex jeweler to win the Rolex Daytona 24,” Denis boasts. “Rolex recognized him with a full-page ad.”

Robb Report caught up with Denis and Nick just a couple of days after they returned from France. Beyond their passion for racing, the Boulles share a keen appreciation for fine timepieces—especially their two top-selling brands, Rolex and Patek Philippe. They also stock Bell & Ross, Blancpain, Corum, Girard-Perregaux, Greubel Forsey, Tudor, and Tutima. Here, they talk about their favorite models of 2018, what contemporary watch buyers are most interested in, and why the guilt associated with buying gold is gone.

How’s the watch business this year?

Denis: We’re lucky. We’re having a banner year, and we’re extremely optimistic. Our sales in Rolex and Patek—we’ve got two of the best brands—are through the roof, and we’ve got orders backed up for years almost. The excitement I’ve seen around those brands, I’ve never seen anything like it.

Dallas’s Top Jeweler Talks Watches, Cars, and the Collectors’ MarketWhat, specifically, are your clients looking for?

Denis: They’re looking for watches that hold value. The justification for their excitement [toward Rolex and Patek] is they aren’t throwing away money. These watches are extremely difficult to get. It’s a new release, it’s dependable, and it’s probably going to go up in value over time—it’s a smart decision.

What pieces from 2018 are you excited about?

Denis: The Patek Aquanaut—the chronograph version, in particular—is an amazing model. And the Nautilus Perpetual Calendar is incredible, a beautiful watch. Those two are my favorites. From Rolex, the GMT II in steel and the GMT II in Everose gold and steel with brown dial was, I thought, the prettiest watch.

Nick: A lot of people are talking about the new Perpetual Nautilus [from Patek Philippe], which I think is one of the most beautiful watches they’ve ever made. For Rolex, I’m really excited to see the solid rose-gold GMT II with black/brown dial. And the Tudor GMT, as well—it’s a great watch and something different.

Has Tudor fully stepped out from the shadow of its sister brand, Rolex?

Nick: More and more, I think they have their own identity. Everybody tells me the Black Bay Fifty-Eight—39 mm, a little thinner than the previous Black Bay—is super cool. Even though it has a Rolex vibe, as the brand grows, it stands apart.

At the spring watch fairs, we saw a number of brands introduce accessibly priced steel models. Are those efforts bringing in new customers?

Denis: That’s not our experience. We’re still seeing the higher end do well. With the Tudor, younger customers are buying it because it’s a cool watch. Obviously, everybody has a budget, and we’ll show them the steel watches in those ranges.

Nick: The steel watches are the marketing pieces, but I’ve seen a renewed interest in gold—solid yellow or rose gold. There’s been more interest in two-tone, too. Even though the marketing pieces are the steel watches, I think that’s actually translated into more of a demand for gold. Also, there’s less of a stigma to wearing gold compared to two or three years ago. Nowadays, if they try on a gold version, they lust for it.

What do you consider the ultimate dress watch and sports watch for 2018?

Denis: The Patek Calatrava is always going to be the ultimate dress watch. It’s understated, the size is perfect. Old money, quiet money—it’s the go-to watch for most people. Even people who have the bigger watches, those who might have the grand complications, they’ll still have the Calatrava. For sports watches, I go back to the Aquanaut, the Nautilus, or the steel Daytona—any of the Rolex professionals, which are obviously hard to get.

If somebody unfamiliar with the market for these hard-to-get Rolexes strolls into your store asking for a steel Daytona, what do you quote them as a wait time?

Nick: You don’t quote people a time frame. We can make a guess, but it can be wrong by years or months. Oftentimes, the best way to explain it is that it’s a reward for a longtime customer.

Denis: The problem you have is if somebody buys it and resells it for a profit; that’s a very difficult situation.

Overall, what trends are you seeing in the market?

Nick: It seems like more people are wearing dress watches again. It goes back to what we talked about. Gold is more accepted, and it’s cool to wear it again. Because three years ago, we very rarely had someone say they wanted a steel and gold watch.

What are younger clients gravitating to?

Nick: Watches that have a bit of a vintage look to them have done really well. People used to want that big gaudy look for a while—enormous watches—and I think people don’t really want that now because they want something they can hold on to forever.

Denis: I think they’re collecting, too. None of these guys just buy one watch. They have one, and they set their eye on the next one and save up for six months to buy it.

Do you attribute your success to any special client outreach?

Denis: We do a lot of events because our stores in Dallas and Houston lend themselves to events. We do a lot related to the automotive racing industry. We had a pre-Le Mans party, and obviously Rolex was a big part of that. We have several functions a year related to racing. At the pre-Le Mans party, we had 150 people in here with some good success with sales. Also, we take people to races. People we deal with are used to going first class everywhere; we give them experiences they can’t get anywhere in the world.