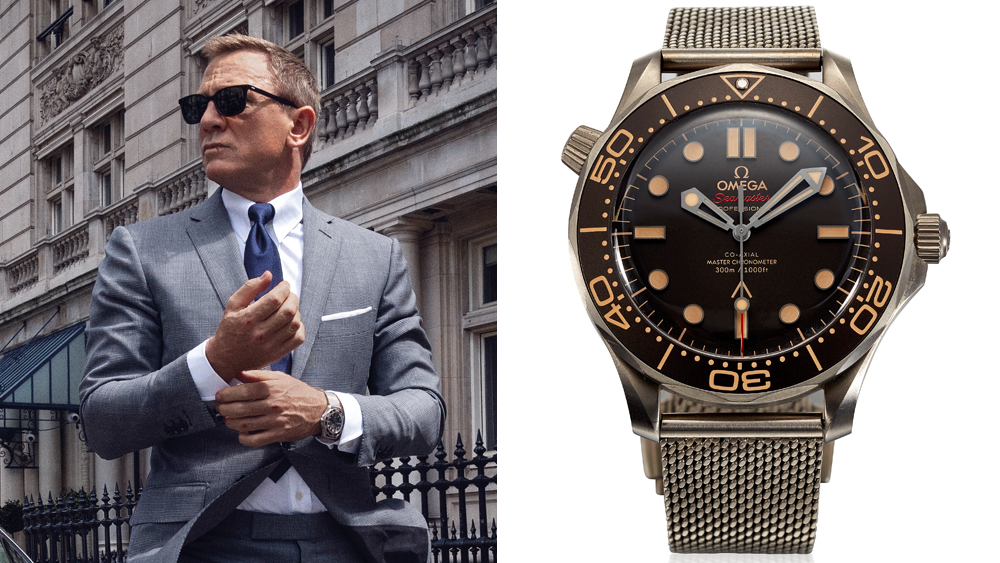 Forget about searching for a watch that looks like something James Bond would wear. Now you can buy one that actually spent time on the spy’s wrist.

An Omega Seamaster that Daniel Craig wore in last year’s No Time to Die will hit the block next month as part of Christie’s “60 Years of James Bond” auction. The timepiece in question was actually designed with the input of the actor to commemorate his fifth and final film as agent 007.

Craig’s watch is called the Seamaster Diver 300M 007 Edition and originally debuted back in 2019, before the film’s release was pushed back three times because of Covid-19. It features a 42 mm case made of titanium that houses a tropical brown aluminum dial with vintage-styled Super-Luminova markers and the British military’s Broad Arrow symbol at 6 o’clock. Completing the package is a matching titanium mesh bracelet. The gorgeous timepiece wasn’t just worn by Craig in the movie, it’s explicitly referred to during a conversation between Bond and Q (“I just showed somebody your watch. It really blew their mind.”).

The timepiece cost $9,200 when it originally went on sale, but the example from the movie is expected to go for twice that, if not more. Christie’s estimates the watch will sell for between $18,000 and $24,000. Proceeds from the sale will go to Time’s Up UK, a charity that insists on safe, fair and dignified work conditions everyone.

Craig’s watch is one of the more noteworthy lots that will go up for bid as part of Christie’s two-part “60 Years of James Bond” auction next month. You could also score a very rare Aston Martin DB5 stunt car from No Time to Die (which has a pre-sale estimate of $1.83 million to $2.43 million), a jet boat from The World is Not Enough ($24,000 to $36,000) or a Swarovski-encrusted prop egg from Octopussy ($7,000 to $10,000). The first part of the event, an invite-only live auction, will be held on September 25 at Christie’s salesroom in London. The second part, an online auction open to the public, will run from September 15 to October 5.