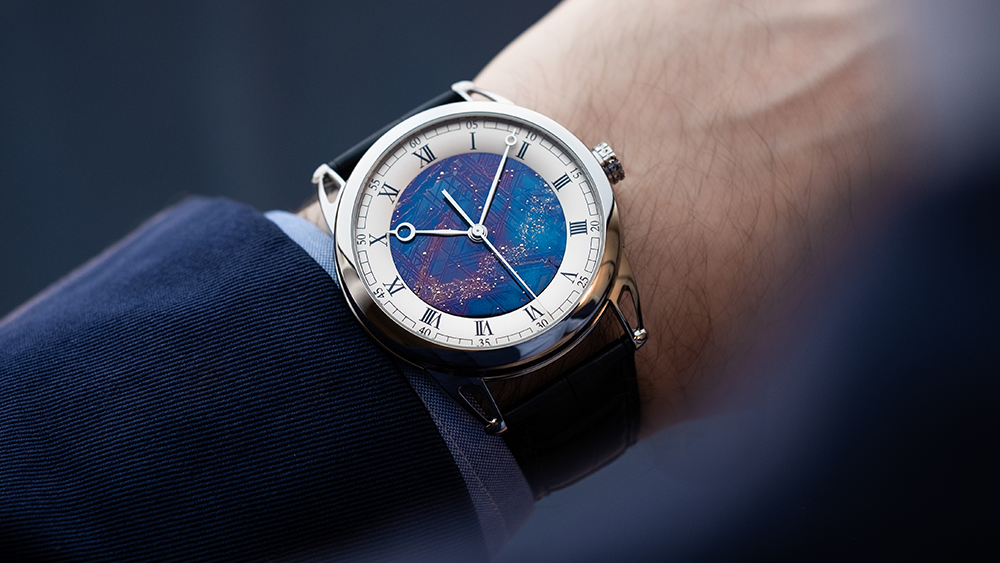 Dubbed the DB25 Starry Varius Aerolite, the 42 mm watch features a dial crafted from the oldest known meteorite to date. The cosmic rock, called the Muonionalusta Meteorite, is believed to have struck Earth over one million years ago on the banks of the Muonio River, which forms part of the border between Finland and Sweden. The first fragment was discovered in Sweden in 1906 and is composed mainly of iron and nickel. If you look closely at the watch’s dial, you’ll spot the meteorite’s cross-hatched Widmanstätten pattern revealed during the meteor’s finishing process.

The dial’s striking color is a result of heating the meteorite, which causes chemical reactions in its material, according to the Swiss watchmaker. The stars are small white gold pins dotted across the dial’s surface for the effect. The combination of the two creates flashes of light that evoke a celestial look.

No two watches will have exactly the same representation of the night sky. You’ll also be able to choose a constellation that is based on a precise sky map, at a specific date, time and place for your piece. But all of the watches will keep exacting time, and display it on a Roman numeral hour circle and an Arabic numeral minute track on a silvered disk. Both are accented by hand-polished steel hands that are identical to those on the dial of De Bethune’s DB25 Starry Varius, which debuted in 2018.

All of this is housed inside an ultra-light polished titanium case. The watch is equipped with a manual-winding movement, dubbed the DB2109V4 calibre, that was designed in-house at De Bethune’s manufacture in L’Auberson, Switzerland. The piece’s double anti-reflective sapphire crystal case allows you to see the mechanism, as well as the watch’s titanium and silicon tourbillon, through its openwork caseback. And it’s not just for looks: the movement achieves an impressive power reserve of up to four days.

The out-of-this-world watch is par for the course for this brand. De Bethune’s founder and master watchmaker, Denis Flageollet, is passionate about space and meteorites in particular. In fact, three former releases from the Swiss watchmaker feature meteorite elements, including one of the cases of the famous Dream Watch 5, the dial of the DB28 Kind of Blue Meteorite and most recently the dial of the DB28XP Météorite.

Limited to a production of just five pieces per year, the DB25 Starry Varius Aérolite will set you back $260,000. Visit the De Bethune website for more details.