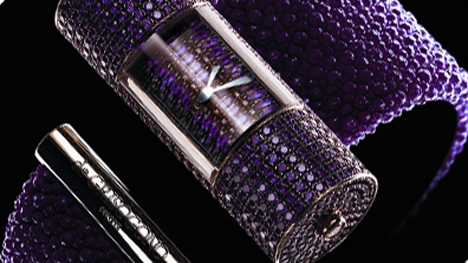 “My philosophy, as a jeweler and as a watchmaker, is always to try to do things that have not been done before,” says de Grisogono founder Fawaz Gruosi. Not only is this true in the technical sense—his recent endeavors include some extremely complicated pieces—but in his intriguing interpretations of the haute joaillerie watch. Gruosi originally came to Geneva to work for Bulgari in 1982, and his brazenly assertive, large-scale, designs as well as his bold use of color reflect that background.

Surely no one else, for example, has ever transformed a simple lipstick tube into a gold watchcase and paved it with baguette diamonds, rubies, or emeralds. Yet by fetishizing it, Gruosi has made a perfect nod to the spirit of feminine adornment. His philosophy is likewise exemplified by the cheeky Be Eight, which also is representative of Gruosi’s habit of designing first, and then figuring out later how to produce it. The watch is painstakingly set with gems that had to be custom cut and then set, mosaic-style, to fit the extreme curves of the case. Gruosi says one of the advantages of being situated in Geneva is that, as a center of watch and jewelry making, finding perfectly matched gems and the professionals to cut and set them is not an overwhelming issue. “It is the perfect environment for us, because it is so central and because of the concentration of knowledge and expertise in this field.”

He set his technicians to a similarly exacting task with the Boule, a spherical pendant watch. Gruosi takes a disco-ball approach to what was a Victorian trend that was more in keeping with the pocket-watch styles of the era. The spherical shape meant producing a sapphire crystal with an extreme curve to fit over the dial. Not only did Gruosi’s team accomplish this, they also figured out a way to set the time by pushing on the crystal.

Being situated in Geneva has also fired Gruosi’s determination to create technically advanced timepieces and even develop an in-house base caliber, due next year. It is, therefore, no surprise that he also produces mechanical watches for women, combining his whimsical aesthetic and penchant for pavé with the merits of high watchmaking. Many of the watches are billed as unisex, and it is entirely possible that even the purest male watch aficionado might be won over Gruosi’s sheer audacity in design.