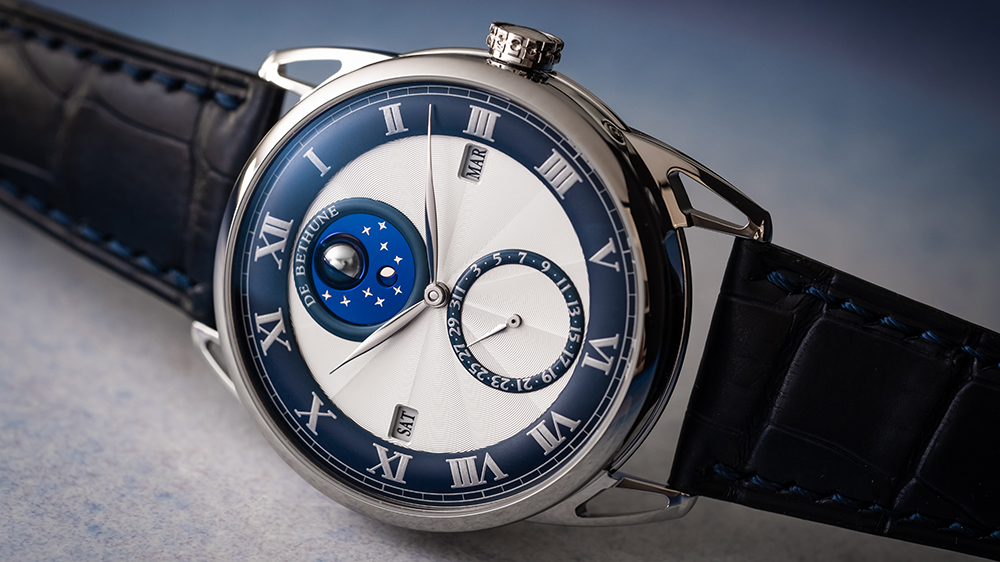 Last year, De Bethune introduced an alluring green DB25 perpetual calendar at Dubai Watch Week. Now, the Swiss watchmaker is now following it up with a new two-tone edition that includes its signature blend of vintage-inspired and cutting-edge details.

Set in a 40 mm titanium case, the dial of the new DB25sQP is formed by a high-contrast silver guilloche center surrounded by a domed blue chapter ring with hours marked in old-school Roman numerals. The rings around the date indicator and the moonphase aperture are similarly domed. The updated spherical moon phase indicator at 12 o’clock is crafted from blued titanium and embedded with twinkling rose gold stars.

There are apertures for the month at 3 o’clock and the day of the week a 9 o’clock. De Bethune placed the apertures for each on anthracite discs with a silver decal. Leap years are indicated by a gold pastille that appears in the starry sky at 12 o’clock. The moon phase has an accuracy of one lunar day every 122 years. Flip the watch over for a view of its openwork caseback in polished titanium. A sapphire crystal protects its movement, on both sides, and is imbued with an anti-reflective coating that makes it easier to read the time and pore over the mechanism’s contents.

Equipped with the DB2324V2 self-winding movement, the DB25sQP watch has a five-day power reserve thanks to a self-regulating twin barrel. Its movement also includes a titanium and white gold balance wheel, De Bethune’s balance-spring with a flat terminal curve, a silicon escape wheel, a triple pare-chute shock absorbing system and an oscillating weight in titanium and platinum. Most of those mechanical features were created in-house and/or patented by the watchmaker between 2004 and 2006, which adds to the DB25sQP’s balance of old and new.