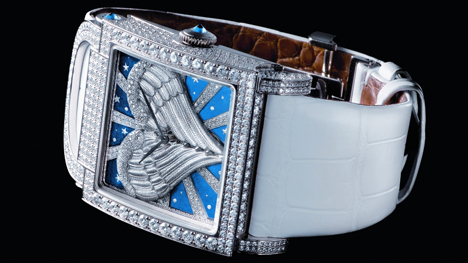 “For centuries, the rare artistry of the watch world has been dedicated to men’s watches,” says Cristina Thévenaz, CEO of DeLaneau, as she points out sketches in her weathered notebook. “I wanted to somehow challenge the watch world by introducing artistry from very classical men’s watches to a contemporary woman’s world.” Thevanez’s portfolio and sweeping calligraphy harks to a bygone era, but her concepts chart a new direction in mechanical watchmaking, where complicated timepieces are designed to speak to the romantic, feminine soul rather than to the technical, performance-driven yearnings of men. With an eye to history, she creates unique combinations of the traditional Geneva arts of miniature enamel painting, jeweling, and engraving, with original complicated mechanical movements.

With no background in watchmaking, Thévenaz, a former graphic designer, has had to struggle for recognition in an industry that is ruled by men and guided by corporate politics. Yet her refreshing perspective and passionate commitment to her purist vision has earned the respect of some of watchmaking’s current visionaries. “She deserves a lot of credit,” says Richard Mille, whose groundbreaking technical watches have spawned several imitators. “She is very fresh and interesting in a world where people think alike and copy each other. Her concept is very clear.”

This year, Thévenaz unveiled two new models. The centerpiece of Angel Heart is a sculpted three-dimensional heart formed by two angel wings closed together on the dial. When you turn the winding crown, the wings open to reveal a small seconds display. The 1608 is a jumping-hour-and-minute model named for the number of times its digital indicator jumps, or changes, in a day. Freed from the constraints of hands, Thévenaz has greater liberty with the design of the dial. Both watches offer dozens of creative permutations as the features can be decorated by the various creative craftspeople Thévenaz has at her fingertips, including specialists in high-fire enameling, guilloché, engraving, miniature painting, and hand-set gems.

“In Geneva there is a palette of people who are specialized in different arts, and you can recognize their work,” she says. “It’s challenging, because I want to show their artistry, but that has to come together with the technical aspect of the watch. What is so seductive is you have a time machine that is extremely precise and mathematical, yet assembled by hand, which gives it a human touch. It is a beautiful marriage between yesterday and tomorrow.”