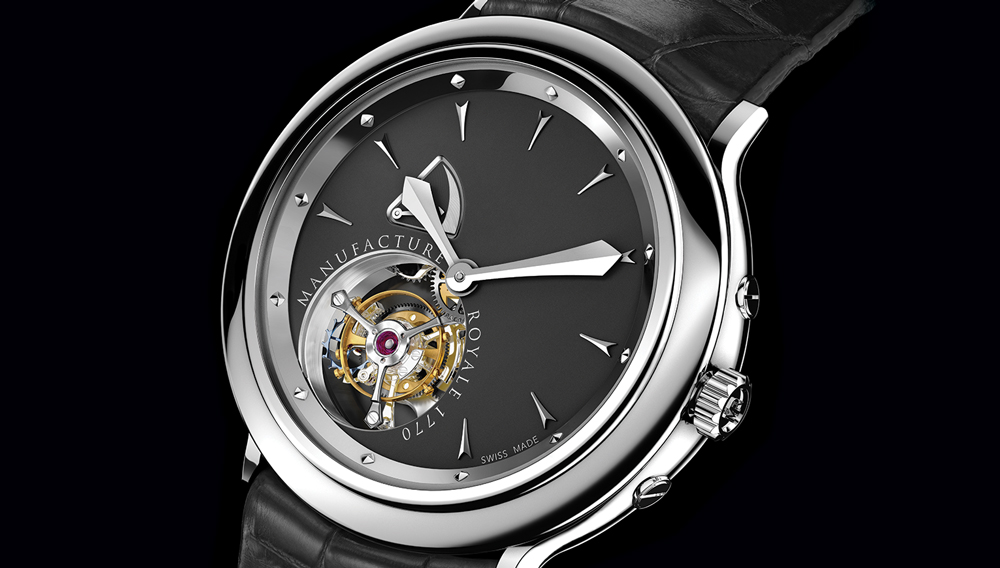 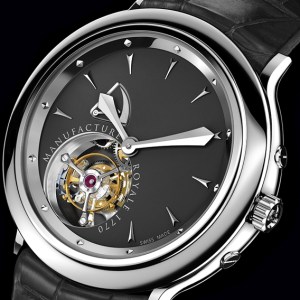 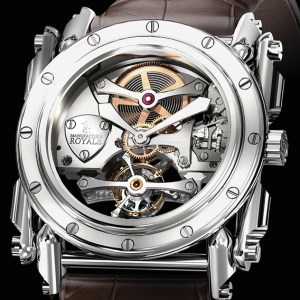 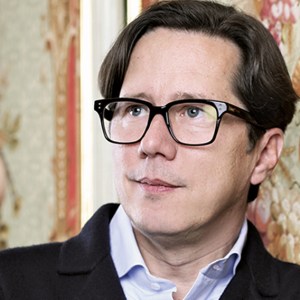 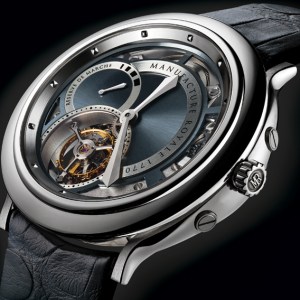 A redesign for Manufacture Royale results in a new form.

“I was a bit scared when I started,” confesses noted Swiss watch designer Eric Giroud. “The watch was a bit strange.” The tourbillon model Giroud had been tasked to redesign, dubbed Androgyne by the small boutique firm Manufacture Royale, was certainly unconventional. An overtly complicated case married to a leather strap through a complex system of articulated tubes, Androgyne was every inch the technical creation of the watch component manufacturer who founded the brand. But after the sale of Manufacture Royale to watch industry veterans Gérard Gouten, Alexis Gouten, David Gouten, and Marc Guten in 2013, Androgyne, the company’s most recognizable model, was first on the list for a makeover. The Goutens took the sensible step of handing the redesign to the best specialist they could find.

The soft-spoken, bespectacled Giroud does not carry himself with the flamboyance of Gerald Genta, once Switzerland’s most famous watch designer. But of the designers currently practicing in the industry today, Giroud may come the closest to possessing his star power. A trained architect, Giroud has worked for brands as large as Tissot and Harry Winston, yet his most recognized work has been for smaller firms like MB&F, where his imagination enjoys more free rein.

Compared to Giroud’s sometimes unorthodox past projects, the Goutens’ instructions to update the tourbillon “with some elegance” was a deceptively simple brief. “We wanted to redefine the system for the lugs,” says Giroud. “That was our starting point.” But in looking at the tubular lugs of the old Androgyne, Giroud found an angle with which to approach the whole project. The polished tubes, as well as the tightly radiused, polished corners of the case, created abrupt changes in reflected light. Giroud sought to soften this effect with gentler curves, also in high polish. “The new watch is actually the same diameter as the old one,” he explains, “but most people think it is much larger, because the diffusion of light is much slower. Everything is smooth.”

The new shapes, however, began to turn a minor update into a much larger project. “We ended up completely redefining the watch,” explains Giroud. “The dimensionality of the bezel was actually sort of an accidental discovery after sketching the parts around it. After that came the nightmare with the lugs.”

As he thumbs through reams of sketches of the lug system on Manufacture Royale’s new tourbillon, now called the 1770 (named for the year the original Manufacture Royale was founded), the large number of detail adjustments to produce the final product becomes abundantly clear. And while Giroud’s descriptions betray a certain amount of pain at the length of the process, it produced what may be the 1770’s defining element: detached lugs that provide a connection to the previous model, but also an entirely new sense of fluidity and originality. “It looks like a normal watch from the top,” explains Giroud, “but there is actually a spacer in between the case and the lugs, which is a very interesting construction.”

Giroud points to the lugs as an example of his architectural training at work—designing a piece component by component rather than the large-scale sculptural approach taken by some of his peers. He also credits this training for giving him the ability to approach projects on an individual basis, rather than injecting a common style throughout his work. “The foundation of a project is the feeling and understanding between the people involved,” he says. “It’s a long process, and nobody knows where we will be at the end. It’s very important to have to search a little.”

The Most Disrespected Person on Earth Is the Black Woman + Other Powerful Statements About the Breonna Taylor Grand Jury Decision From LeBron James, Colin Kaepernick & More