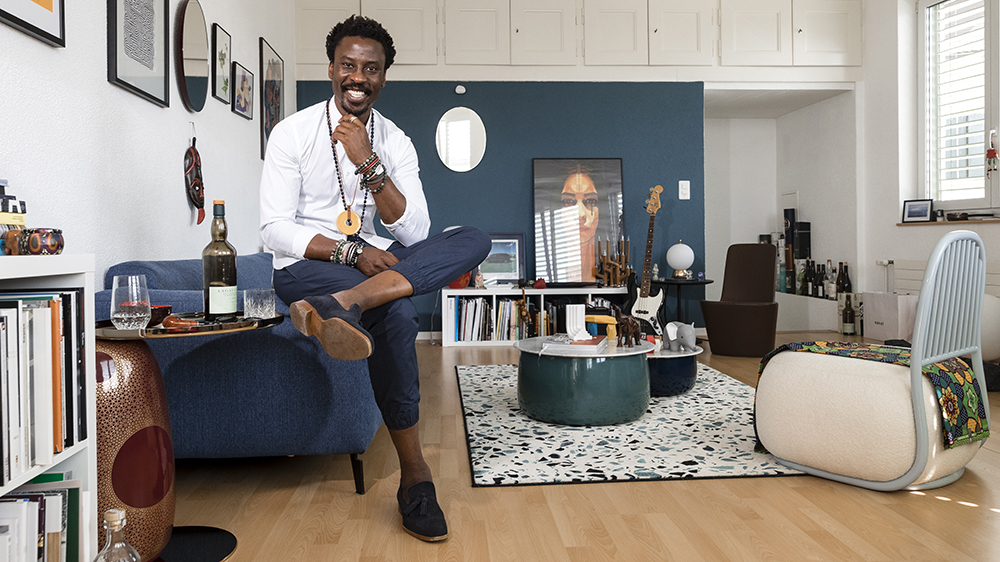 Known for his high-end furniture and lighting creations inspired by the hip-hop culture of his Southern California upbringing, Ini Archibong is already one of the most talked-about designers of the last two years. The 36-year-old’s résumé includes glass-blown floor lamps for Sé and the CNC-milled marble Erosion collection for Lapicida, in addition to his namesake designs. And by the time he graduated from art school in Switzerland, where he’s now based, he had already caught the eye of one of the world’s top luxury houses: Hermès tapped the Nigerian-American designer to create an entirely new line of watches, which debuted this year at the Salon International de la Haute Horlogerie watch fair in Geneva.

Every morning I chop fruits and veggies for a smoothie, make a pot of tea and do a spiritual reading. Every Friday I check on the newest music releases and spend the day listening to albums while I work.

Make music. I have an extensive vinyl collection, which I use my MPC1000 to sample from. I’m also a huge fan of analog synthesizers. We just built a modular synth rack in Berlin—the sounds are not from this world.

What, apart from more time, would make the biggest difference in your life?

I just designed a watch, the Galop d’Hermès. I’ve always loved timepieces: I wanted to create something out of the box—to design a piece that would be perceived as futuristic yet simultaneously classic. The idea was to think of what a watch could be, or should be, rather than sticking to a traditional shape.

My wardrobe changes every season, but somehow I always find myself wearing an old Ralph Lauren madras oxford while I work. I also wear my favorite ThunderCats T-shirt all the time.

Lagavulin Distillers Edition Double Matured single malt (16-year) with a few drops of water to open it up.

The song currently in your head?

Which are your three favorite stores?

When I’m in LA, I stay at the Palihouse in West Hollywood. It’s like a home away from home there. In Paris, the Hotel Grand Amour—Suite 304. For a relaxing escape I head to 7132 Vals in Switzerland. They have rooms designed by Kengo Kuma, Thom Mayne and Tadao Ando. The spa is by Peter Zumthor.

My older brother Koko Archibong, for his intelligence, perseverance, craft and dedication. He is an Olympian.

Which car are you most attached to?

My 1971 Mercedes 280SE—the only car I have ever purchased and the one car I want to always own. I’ve had it for 10 years, and it’s still in California. My father has been taking care of it for me. It’s such an elegant and functional design. Its beauty and styling augment its superior engineering. It was ahead of its time, and it epitomizes a luxury vehicle.

Snowfall. I get nostalgic about my childhood growing up in Los Angeles. They did an amazing job of capturing the feeling. RIP John Singleton.