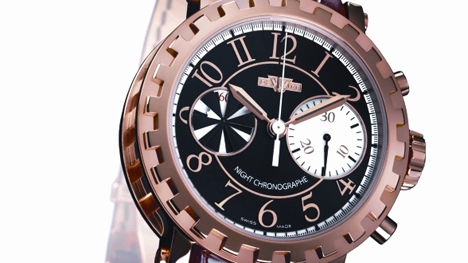 Jérôme de Witt’s admiration for Abraham-Louis Breguet is rather personal. De Witt’s great-great-great-granduncle Napoléon was one of Breguet’s best customers, and as the last descendant in his family, de Witt inherited many of the erstwhile emperor’s horological treasures. Apparently, he also inherited an appreciation for the 18th-century master watchmaker’s strategy. “Breguet was working with his own product, taking his own approach,” says de Witt. “We too want to be different.”

While his watch company is now merely five years old, de Witt’s drive for total creative autonomy has led him to create Geneva’s newest independent manufacture, located in a 54,000-square-foot facility in the suburb of Satigny/Meyrin. Backed by a staff of 100 and no longer beholden to suppliers, de Witt is intent to make his brand work “with our knowledge and our materials and our quality.

Even before opening the manufacture, de Witt has already proven his rich fund of watchmaking ideas, many of which he completed in collaboration with BNB Concept, the complication specialty house that he helped launch. The man can claim several patents, especially in the area of tourbillons. “My fundamental approach is to be curious,” he says. “We try to stay very open-minded.” This philosophy extends beyond traditional watchmaking to include the design of his mechanisms. In the case of his Tourbillon Force Constante, de Witt’s youthful fascination with steam engines provided fertile ground for new ideas. “I’d watch them move from one farm to another,” he explains, “and I’d observe that some were stronger than others. So I examined the regulator on top of one, and I kept the design in my mind, not knowing for what purpose I would use it.” Years later, he remembered it while developing the Tourbillon Force Constante. “Watchmakers have been using the same mechanisms for three centuries; now a steam engine gives us a completely new view,” he says.

By establishing the new manufacture, the DeWitt brand is joining a very elite group of Geneva companies that exercise complete control over the watches they produce. More significantly for de Witt, he will combine his broad purview in watchmaking with the CNC machinery to prototype and build any mechanism he can imagine. This has already led to unusual designs, such as the recent Academia Night Chronographe as well as wild horological objets like the fantastical WX-1. “It’s very difficult to make something different if you are not free from the inside out,” de Witt observes. “We have a small production but high control.” And with plans to introduce his own base movement in the next couple years, his control will become complete.