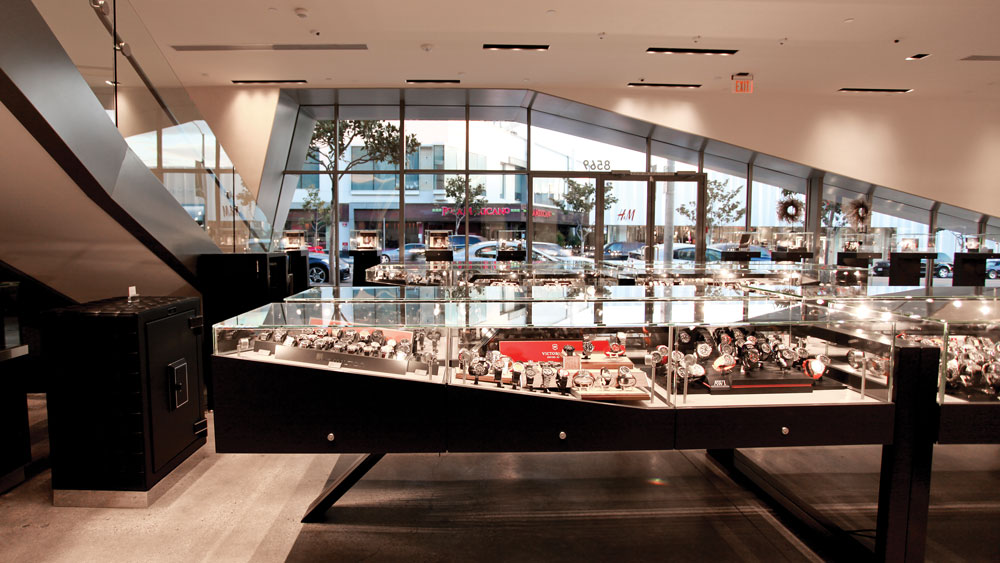 In January, when Omega announced the sale of its Speedmaster “Speedy Tuesday” limited-edition chronograph on Instagram, all 2,012 pieces sold out within four and a half hours. In a trade that’s been painfully slow to embrace e-commerce, the sale was a milestone event—especially for the industry insiders who were among the would-be buyers.

“I am absolutely gutted I missed out on it,” says George Bamford, founder of Bamford Watch Department, a London-based company that specializes in customizing sports watches. Bamford found an opportunity to redeem himself in June, when Hodinkee teamed up with TAG Heuer to sell the $5,900 Limited Edition Carrera Skipper, a modern interpretation of a vintage Heuer reference limited to 125 pieces. “I fell down the stairs in my boxer shorts, and I sat in front of my computer and bought the watch there and then,” Bamford says. “Then I refreshed to buy my wife one and it had sold out.”

Five years ago, a serious collector like Bamford would have been ridiculed for suggesting a reputable source for fine timepieces might be found on the Internet—on a social media site, no less. Five years, however, is an eternity in web years. Today, the watch retail universe, once governed by multi-brand brick-and-mortar stores, is overrun with digital upstarts revolutionizing the way new, pre-owned, and vintage timepieces are bought and sold.

“There is no doubt in my mind that 65 percent of watches in the next three years will be delivered online,” says Andrew Block, president of TrueFacet, an online marketplace for pre-owned jewelry and watches. “The online experience is a lot better than in stores,” says Block, who spent nearly 30 years in traditional watch retail as the former executive vice president of Tourneau. “You can get all the information you need; you can find a price; you can do it from your couch, your backyard, your car. Multi-brand retailers have become showrooms. The people behind the counter aren’t giving customers the experience they deserve. And that’s a problem.”

It is hardly the only one. The high-end watch business is in the midst of an existential crisis stemming from forces set in motion a decade ago, when watchmakers in Switzerland went into production overdrive to supply the Chinese juggernaut—and continued to overproduce, even when it became clear that declining sales in China and elsewhere had created a market saturated with inventory. At the same time, many of the top brands became enamored with the idea of opening boutiques exclusively devoted to their brands and delivering full margin to their bottom lines. Many companies embarked on this route, oblivious to the damage it inflicted on their longtime partners that had historically fed them with their newest customers.

“As a traditional retailer, you have a real problem,” says Hamilton Powell, CEO of 5-year-old Crown & Caliber, one of the most prominent new entrants in a crowded field of online watch sellers. “You’re forced to buy $10 million of inventory but you can only sell $4 million. What happens to the other $6 million? The retailer sells the inventory at a deep discount.”

Much of that excess inventory has found its way to the online marketplace, fueling a boom in “never worn” wristwatches sold as “pre-owned” by websites offering discounts as steep as 40 percent off the list price. Although the models no longer come with their original factory warranties, the most well-regarded online players—including TrueFacet, Crown & Caliber, and Govberg Watches, a Philadelphia, Pennsylvania–based operation that recently acquired WatchUWant.com—will mirror the brands’ guarantees using their own in-house service capabilities. But all these new offers are having effects that may make a permanent imprint on the retail landscape.

“Customers are getting smarter—they don’t want to pay full retail,” says Reggie Brack, a former Christie’s executive who recently joined the Detroit-based startup StockX, an online stock market for collectible sneakers and, as of May, watches and handbags. “With online resources, you have that sales data and know how something should be priced.”

Even independent watchmakers, long considered too niche to be viable online, are getting in on the digital action. In July, Skolorr.com debuted as a curated platform for 20 artisans and independent brands, including Czapek & Cie, Hautlence, and Manufacture Royale.

“There are so many areas where nobody is selling Czapek,” says Xavier de Roquemaurel, CEO of the Geneva-based brand. “You have to leave a lot of doors open.”

But while survival may be top of mind for many of the industry’s boutique makers, the same cannot be said of the extremely well-distributed companies like Panerai, which in June released an “e-commerce micro-edition” of the PAM00731 Luminor Submersible Automatic Acciaio. Limited to 100 pieces, the model marked the first time the brand had created a piece as an e-commerce first. “If you don’t evolve, you die,” says Panerai CEO Angelo Bonati.

John Simonian, founder of Westime, a respected watch retail chain based in Southern California, shares that sentiment. The future, he says, will be “survival of the fittest.” As the owner of Westime, one of the country’s most successful multi-brand retailers, Simonian has cagily played industry trends by opening a number of franchised mono-brand boutiques for both Audemars Piguet and Hublot. Nevertheless, he is far from abandoning Westime’s foundation as a retailer with strong ties to its clientele. “Overall, the multi-brand retailers that remain will be strong because not every brand can open their own mono-brand boutique,” he says. “They need some kind of stage. Our job is to educate. We have lots of wealthy clients who can afford expensive luxury watches but they don’t know [which is] better. It’s our job to educate them to increase the market.”

The two most successful watch brands in the United States, Rolex and Patek Philippe, are also loath to change a system that functions efficiently for them.

“There’s no great urgency for Rolex to sell online because they’re almost fully represented in almost every market throughout the United States,” notes Andrew Block.

“People buy these watches for a specific event in their life,” says Patek Philippe U.S. president Larry Pettinelli. “They’ve graduated, sold their business. When you have done that, pressing a couple buttons on a computer doesn’t match the experience.”

That is certainly true for Billy Ruvelson, a collector based in Los Angeles. “I’ve never bought a watch from a website,” says the real estate developer, flashing the stainless steel and rose gold Rolex Yacht-Master he picked up at Gearys Beverly Hills, the retailer from which he buys almost all of his timepieces. “In the watch world, the cheapest price is often not the best deal.”

Besides, says Ruvelson, no website can offer him the perks he enjoys as a loyal Gearys client, such as invitations to the Patek Philippe manufacture in Geneva and brand-hosted dinners where he’s seated next to Patek Philippe president Thierry Stern.

Of course, for every old-school buyer like Ruvelson, there is a collector obsessed with finding deals or doing research from the comfort of his home. This might explain why the savviest retailers are investing equally in physical and virtual environments in order to provide clients a seamless omni-channel experience. However, given the newness of all these options, it remains unclear which will win out over time. Will the watch companies provide the financial incentive to feed internet shoppers? Or will customers, deciding experience is part of a luxury purchase, shun the shortfalls of a digital-only experience?

In August, The Hour Glass unveiled the first part of what Tay refers to as its “client experience management platform,” aka e-commerce. But he doesn’t believe it will prevail over the sensory experience found in store.

“Online offers you the opportunity to search for price, the ease of finding a watch you desire, and convenience of delivery,” Tay concludes. “But there’s one thing a salesperson can do in person that you can’t get online: They can make you smile.”