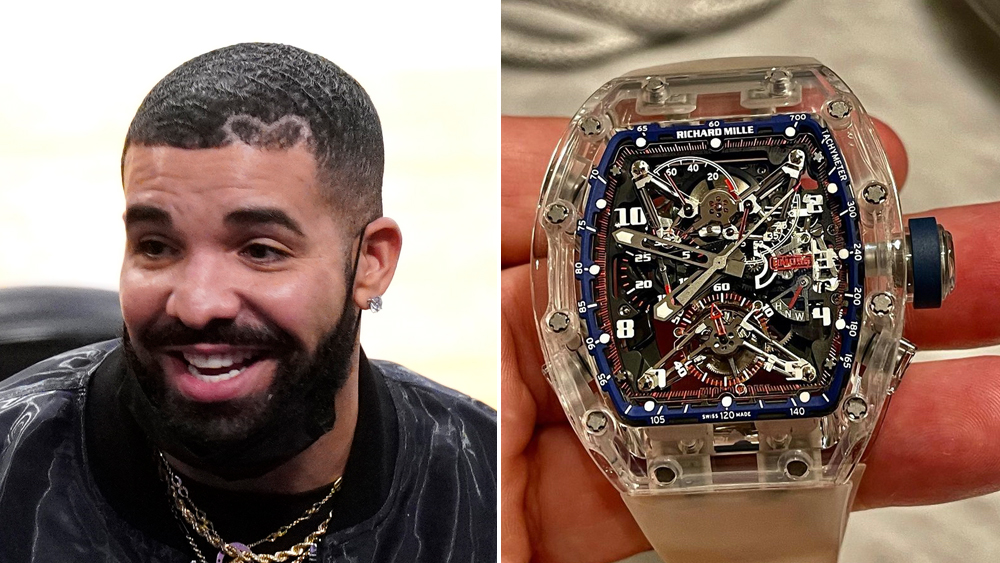 Drake wasn’t about to let his birthday week go by without adding another over-the-top watch to his collection.

On Thursday night, celebrity jeweler Dave Bling shared photos of him and the rapper, who turned 35 on Monday, on Instagram. The point of the post wasn’t just to show off that they were hanging out; he also wanted to display the new timepiece he’d helped secure for the emcee—an almost entirely see-through Richard Mille.

“Drake hit the HOTLINE BLING to Certify his LOVER BOY Status!” the jeweler, whose real name is Dimitry Shimanov, wrote as a caption. “HISTORY has been made! Sapphire Museum Style Richard Mille one time for the culture! Commissioned by the 47th Street GOD!”

While it’s hard to get a good look at the watch in the pictures of Drake and Shimanov, the jeweler helpfully included a close up of the chronograph (as did Drake himself, on his Instagram Story). The image shows a Richard Mille watch with a case made from sapphire crystal, making it basically see-through. Thanks in part to posts from obsessive Drake chronicler, DJ Akademiks, the internet has decided it’s a one-of-10 RM 56-02, a reference introduced in 2014. But while that model also features a sapphire crystal case, we don’t actually think it’s the one.

Instead, Drake’s watch looks to us more like the RM056, which was the world’s first production watch with a sapphire crystal case when it was introduced in 2012. The timepiece, a split-seconds chronograph with a tourbillion, looks similar enough to the RM 56-02 at first glance, but its dial is a lot more colorful: Notably, it features a yellow small seconds indicator, a black tachymeter and a red “RM056” stamp on its crystal. Drake’s version features a tachymeter and clear crown band done up in a rich midnight blue that matches the coat he’s wearing in Shimanov’s photos.

There’s another key difference between the watches. While the RM 56-02 had a more expensive $2.2 million retail price than the $1.65 million RM056, the latter is more exclusive. Only five were ever made, and all of them were spoken for at the time of its release. We can only imagine how much it set the rapper back nine years later.

The rapper has shown he’s more than willing to do what it takes to get the watch he wants. Before his translucent Richard Mille, the last watch he’d shown off on social media was diamond-encrusted Patek Philippe Golden Ellipse just like one Queen Elizabeth had worn in an official portrait from 1984. What Drake wants, he gets.