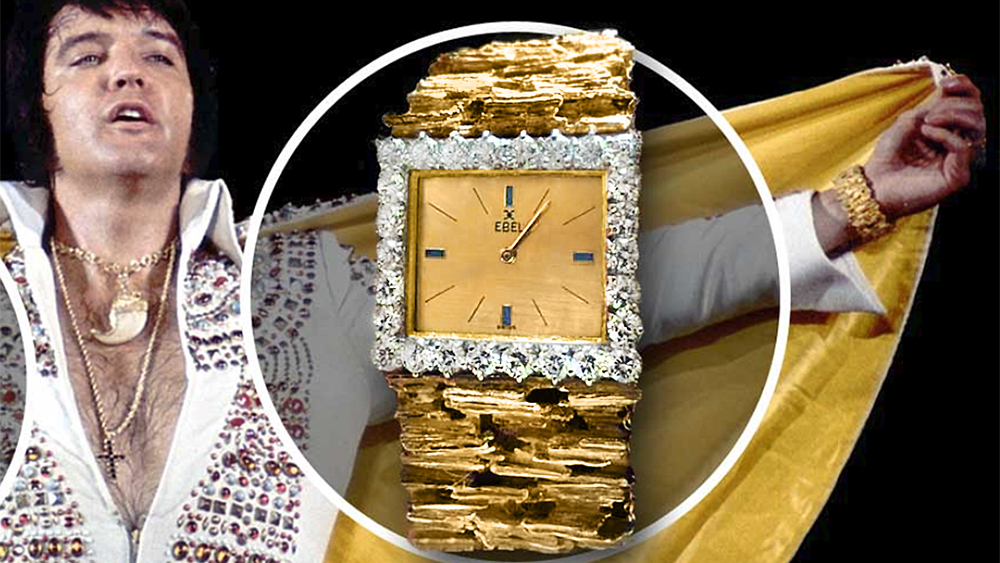 The crown jewel of Elvis Presley’s watch collection has just hit the market.

Designed by Swiss luxury watchmaker Ebel, the 14-karat yellow gold timepiece is as uniquely glitzy as the King himself and stands out among his other, more traditional Rolexes and Omegas. The singular bling features an eye-catching jagged strap, a bezel encrusted with 26 round white diamonds and an interlocking chain lining one side. On the dial, meanwhile, blue hour markers provide a bit of contrast.

Legend has it that the late icon gifted the one-off to his close pal and backup singer J.D. Sumner. He even had the band of the rarity engraved with the message “From Elvis to J.D. Sumner, 1974.” Presley was known to present his family, friends and colleagues with tokens of appreciation, but this may be the most extravagant item he’s ever given away.

A close-up of the striking gold watch (left) and the engraving (right) on its band.  M.S. Rau

New Orleans-based antique store M.S. Rau came across the timepiece in the late 2000s after it changed hands just twice.

“In the 1980s, J.D. Sumner sold all of his jewelry and memorabilia that Elvis had gifted him to the once-owner of the Stamps Quartet, Mike Moon, an avid Elvis fan and collector,” owner Bill Rau told Robb Report via email. “Upon Elvis’ death in 1977, Sumner encouraged Moon to open the first Elvis Museum in Pigeon Forge, Tennessee, which he did in 1979. This watch remained in the museum’s collection until 2018 and was then sold to a private collector whom M.S. acquired it from.”

The diamond-studded grail remains in excellent condition even after all these years. In fact, Rau refers to it as a “10 out of 10.” It is, of course, presented with a certificate of authenticity and a photograph of the “Hound Dog” singer proudly sporting it on his wrist.

“It certainly has the same wow factor as when Elvis was wearing it onstage in the 1970s,” Rau adds.