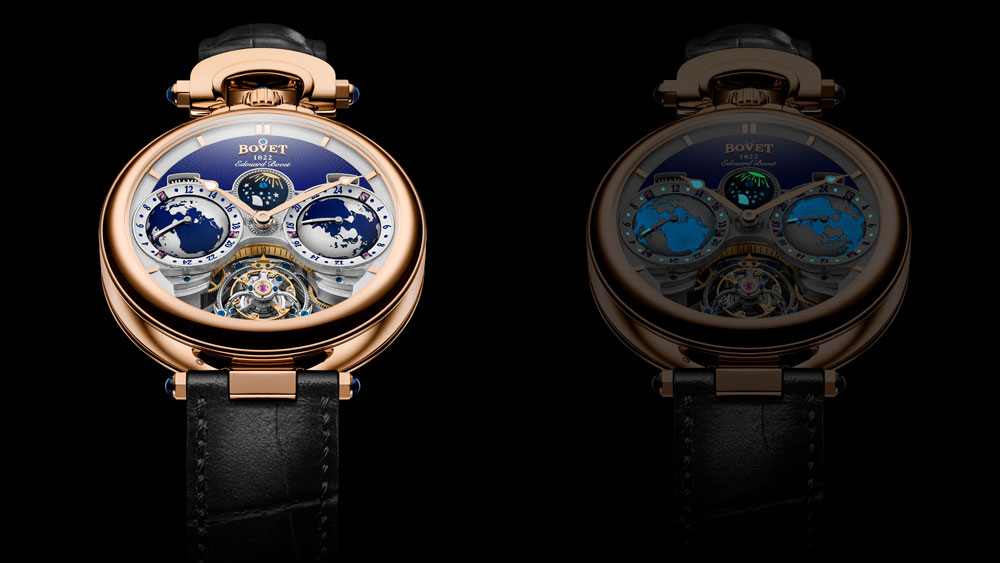 When Bovet unveiled the Rising Star—a triple-time-zone tourbillon with layers of exposed and decorated movement surfaces—in 2012, it quickly became the brand’s most sought-after watch, selling out in short order. It is then hardly surprising that Bovet, which has long identified itself with highly idiosyncratic pocket-watch-on-the-wrist designs, would revisit the successful combination of features so soon. But rather than building a close facsimile of Rising Star, Bovet has used the opportunity to introduce a number of aesthetic and technical refinements that make the new Edouard Bovet Tourbillon—launching at SIHH this week—an altogether more appealing timepiece than its forebear.

The first thing you will notice when examining the timepiece is the newly enhanced curvature of the case, replacing the straight sides of many Bovet complications. The dual secondary time-zone dials have also been replaced by rotating earth hemispheres made from titanium and enhanced by a heavy dose of Super-LumiNova for an electric look in the dark. The globes add dimension and accentuate the travel functionality of the Edouard Bovet Tourbillon, which takes its name from one of the founding Bovet brothers, who traveled extensively in the 19th century—especially to the Far East.

The principal enhancement of the movement when compared to Rising Star is the increase in its power reserve from 7 to 10 days on a single winding. The large barrel also copes with increased drag from the hemispheres and a new rotating day-night indicator. The tourbillon is also now a flying tourbillon (only supported from the bottom) and has been weight-optimized with titanium components.