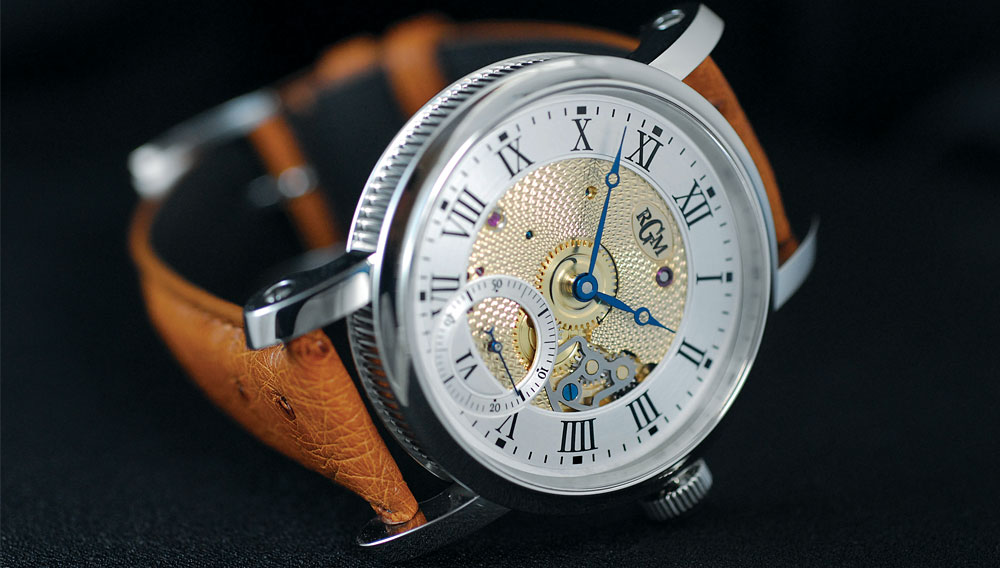 When Roland Murphy committed himself to building an American-made watch movement at the turn of the new millennium, the Maryland-born entrepreneur understood it would be a challenging endeavor. His boutique firm, RGM Watch Co. (www.rgmwatches.com), had such small production numbers (at least in comparison to the established Swiss competition), that European manufacturers were unconvinced that his movement designs were worth the time to machine the components that he would need. Despite such roadblocks, Murphy found a way—relying on a Pennsylvania CNC machine shop and injecting a healthy dose of ingenuity. When specific horology machines proved too costly or too difficult to find, Murphy repurposed existing power tools to produce the detailing work that he was after.

Because of the persistent no’s that Murphy encountered during the eight years that it took for him to produce his finished timepieces, he rarely says no to the custom requests that he receives today. “I’ve always had that mind-set and I don’t like to say no,” he says. “If it’s an interesting project, I try to find a way that we can do it.”

As Murphy explains, it’s not easy to get a truly bespoke timepiece from many of the high-end brands; the option might exist, but it likely is limited only to a few, select customers. Because RGM’s production numbers are much smaller than most other luxury manufacturers’, Murphy can take special requests. The degree of customization is limited only by what customers want and what they are willing to spend. Customers can take RGM’s base model (a $2,500 timepiece) and for an additional $700 or $800, they can add hand-carved engravings on the caseback or a bespoke print on the dial. That’s the low end. The high end easily can exceed $100,000.

When it comes to those top-dollar projects, Murphy works with customers to modify movement functions and cases, but he will go so far as to create a brand-new movement if that’s what a customer requests. To date, the most expensive and elaborate custom RGM timepiece cost $175,000 and took the form of a tourbillon in a gold case with a bespoke engine-turned dial and a modified movement. Murphy says that the watch would have exceeded that price had the customer wanted a made-from-scratch movement, but he says such requests are not common. The average cost of an RGM custom timepiece falls in the $8,000 to $10,000 range.

Murphy also has been known to build a new timepiece around existing IWC movements. As long as the movement is of a certain quality and condition, Murphy can repurpose it in a new timepiece, but he’ll also create a dummy movement to hold the form of the original watch. “It adds to the value of the piece that you still have all the components from the original watch,” he says. “Nothing is lost. The movement could go back and forth between both watches.”

Ultimately, RGM’s custom program gives long-term, serious collectors a chance to add a unique piece to their collections. “They have all the high-end watches, but now they want something that’s special to them and that they’ve had a lot of input in creating,” he says. “Having that kind of shared experience is valuable to them and, in the end, they have something that’s very memorable.”