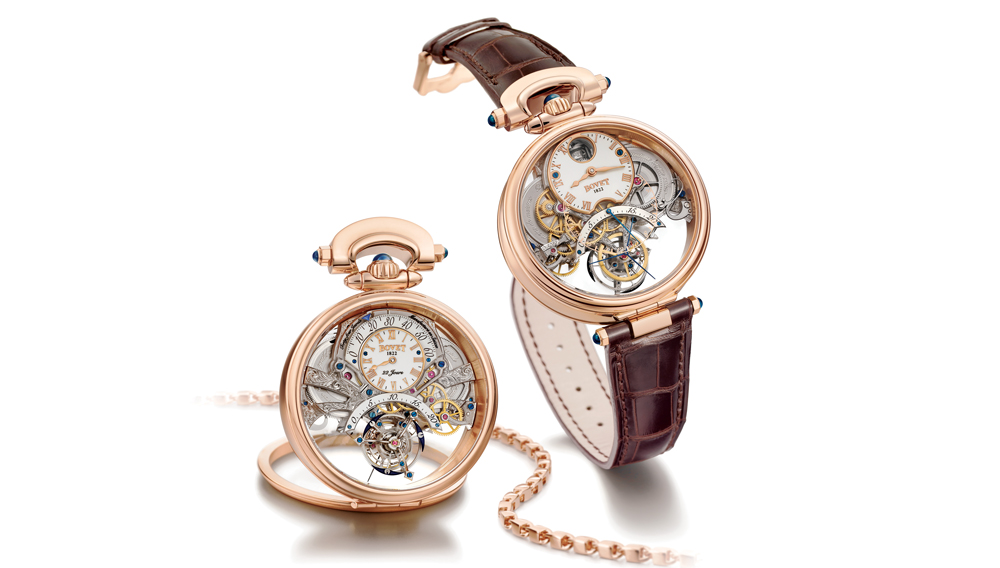 On the surface, the $557,700 Amadeo Fleurier Tourbillon Braveheart looks like many of the other pocket-watch-inspired tourbillon models Bovet has produced in recent years: reversible and constructed with open, airy lines that highlight a variety of finishing and decorative techniques. Yet this resemblance is merely case deep. Within, the Braveheart conceals a number of technical features that represent a significant advancement for Bovet timepieces. “I had the idea the day after we opened our new manufacturing facility in 2006,” says Pascal Raffy, owner and CEO of Bovet Fleurier. “Afterward, I told my team that when we are able [to construct] this watch, we will be a true [watchmaking] facility.”

The timepiece qualifies as a landmark leap forward on a number of counts. Perhaps its most impressive technical achievement is a long, 22-day power reserve supplied by two massive barrels. A patented-differential-gear assembly enables the wearer to charge these barrels in full with as few as 56 turns of the crown. At the center of the regulating system, which has been completely reworked, is a flying tourbillon—another first-time construction for Bovet. The balance wheel has been replaced by a high-inertia, three-armed spoke with ogival-shaped weights at each end. The spoke is driven by a cylindrical hairspring—a type formerly used in marine chronometers—that Bovet makes in-house. The escapement has been placed on the reverse side of the carriage, which also features a separate seconds indicator that rotates in the opposite direction of the tourbillon.

While many of these features are present in other high-end watches, Bovet’s Braveheart strings them together in an especially logical and aesthetically pleasing manner. “Our goal was not just to pay tribute to the long power reserve watch in our patrimony,” says Raffy, referring to the brand’s 1910 pocket watch that could run continuously for just over a year. “It is a global concept, with [the] balance wheel connected to the barrels in terms of both energy consumption and chronometry.” In fact, Bovet has limited the frequency of the watch to 18,000 vibrations per hour to save energy; at this speed, the improvements to both the new balance and the hairspring are critical to maintaining chronometric performance.

For Raffy, who often approaches watch development from the perspective of a collector, 18,000 vibrations per hour is a speed that enables the wearer to enjoy a view of the cylindrical hairspring—the component he believes delivers “the poetry” of the timepiece. “The longest trip I ever take is three weeks,” he says, “and I take great pleasure when I get home to find the baby’s heart still beating.”