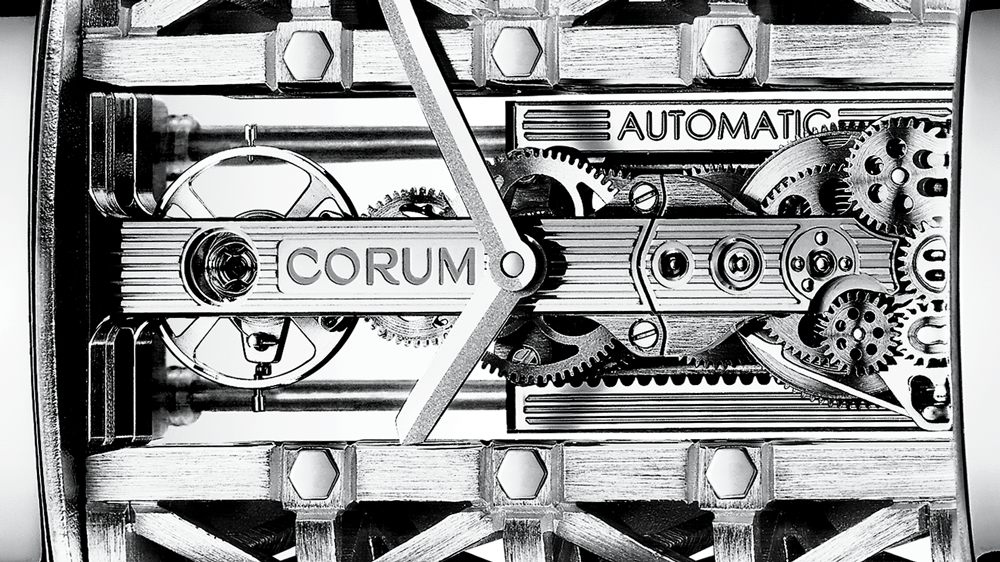 When the self-taught watchmaker Vincent Calabrese won a gold medal at the 1977 Salon International des Inventions de Genève, the watch industry looked in wonderment at his prizewinning movement. Calabrese had followed none of the usual horological rules. His movement was not particularly accurate, robust, or reliable. What made his invention stand out was the way in which he had set all the gears in a straight line between the balance wheel and mainspring such that the viewer had an intuitive sense of how the mechanism kept time. Calabrese sold the movement to Corum, which enclosed it in a transparent crystal case and dubbed it the Golden Bridge. Variations are still being made by Corum today.

Few wristwatches can boast a four-decade lifespan. Most novel-ties last a single season, making headlines while the manufacturer is already secretly planning the following season’s attraction. The recent watch market downturn has been blamed partially on oversaturation: more novelty than collectors can absorb, with growing suspicion that novelties are driven by marketing rather than horology.

There is truth to these claims, and the industry has sought to regain balance by reviving and revitalizing classics. (In addition to the 2017 Golden Bridge Rectangle, this past year has brought new releases of historical icons including the Longines Lindbergh and the Omega Railmaster.) These classics possess qualities of inventiveness that have long outlasted initial impressions, and the standards of deep innovation set by these iconic timepieces remain vital to contemporary watchmaking.

The Golden Bridge clearly falls into the former category. By fully exposing the mechanism, Calabrese exposes the wearer to a watchmaker’s view of time. In this formulation, time can be seen to unwind, moderated by the balance wheel’s inertia. This procedural understanding is more than just a perspective on technology. It also evokes a clockwork model of the cosmos, in which the universe is succumbing to entropy but process has a set pace—from which time itself emerges. By inventing an in-line watch movement, Calabrese has created a philosophical instrument.

The Lindbergh Hour Angle from Longines was designed to use the Navy’s Weems system after the aviator’s trans-Atlantic flight  Photo: Courtesy Longines

Psychology can also be an impetus for deep innovation in watchmaking. Since the rise of the clock tower during the Middle Ages, timekeeping has organized society with ever-increasing precision. Clocks and watches govern every aspect of modern life, accentuating emotions ranging from anxiety to impatience.

Recognizing the relationship between impatience and timekeeping, Hermès has released a watch with a mechanism dedicated to looking forward. L’Heure Impatiente, developed by the watchmaker Jean-Marc Wiederrecht and released earlier this year, has a subdial that can be set to a future time as much as 12 hours in advance. When the designated hour arrives, a countdown timer starts and runs for 60 minutes before striking a chime.

Elements of this watch have a historical precedent. The chime is reminiscent of alarm watches such as the Jaeger-LeCoultre Memovox, and countdown timers are found on timepieces designed for regattas such as the Rolex Yacht-Master. The innovation is in how these are combined to give expression to impatience, to provide a mechanism for controlling it, and perhaps even to deconstruct this very human trait by reducing it to clockwork.

L’Heure Impatiente was designed by watchmaker Jean-Marc Wiederrecht for Hermès and allows the wearer to set a reminder chime  Photo: Courtesy Hermès

If Calabrese’s movement can be construed as a philosophical instrument, Wiederrecht’s achievement has been to invent a kind of psychological automaton.

When Charles Lindbergh set out to develop the ultimate flight navigation watch in 1930, he was already the world’s most celebrated aviator, and the challenges of his 1927 solo trans-Atlantic flight directly informed the design of his timepiece. Lindbergh had made his way across the ocean by dead reckoning—charting his course with compass and airspeed indicator—because navigation by the stars was too demanding for one man flying alone. (The standard technique, originally conceived for navigation at sea, required a chronometer and a sextant as well as reams of star charts and reduction tables.) Lindbergh sought to simplify celestial calculations on the fly with an oversize wrist instrument designed specifically to work with the Navy’s state-of-the-art “hour-angle” system.

The Hour Angle watch that he invented in collaboration with Longines was re-released this year to coincide with the 90th anniversary of his most famous flight, which was timed by the Swiss watchmaker. It incorporated task-specific features such as an external bezel that could be adjusted to indicate the equation of time (the seasonally variable time of day as measured on a sundial), as well as a rotating inner disc for calibrating the timepiece to the exact second according to radio beacons. The purposefulness of these functions, which benefited pilots for decades, make them textbook examples of deep innovation.

Functional inventiveness persists in watchmaking today, embodied by the Einsatzzeitmesser (EZM) series of watches by Sinn. Einsatzzeitmesser means “mission timer,” and Sinn fully embraces the name: Many EZMs are developed in collaboration with a specific sector of the German government to serve the focused needs of personnel ranging from customs police to military divers. Function guides every attribute of these timepieces, and is guided in turn by the demands of the intended mission.

The new EZM 12 is exemplary. Built for use by helicopter paramedics, the watch has an internal bezel marked to measure time elapsed from the moment of dispatch, an external bezel for countdowns, and a pulsometer with a four-way sweep-seconds hand so that a pulse reading can be initiated every 15 seconds. (A chronograph wouldn’t serve the purpose since operation requires two hands.) Even the watch case is task-specific: Both the strap and the external bezel can be removed so that the timepiece can be completely scrubbed down and sterilized between missions.

Purpose-driven innovation is not necessarily limited to external features and indications. Back in 1957, Omega took on one of the greatest impediments to timekeeping precision by developing a watch impervious to magnetism. The Railmaster was intended for engineers who encounter strong electromagnetic fields on the job. (The conditions of railroad engineering gave the watch its name, but it could equally serve the needs of electrical engineers running high-energy experiments.) Electromagnetic fields affect performance of a watch movement by magnetizing components, distorting timekeeping parameters such as the torque of the balance spring. Omega overcame this problem by encapsulating the movement in a Faraday cage—a soft iron enclosure that guides magnetic field-lines around the mechanism inside.

This simple intervention can protect movements from fields of up to approximately 1,000 gauss, and Omega was not alone in exploiting it. Other antimagnetic watches of the same era include the Rolex Milgauss and the IWC Ingenieur. (Iterations of both are still in production.) The problem is that when fields get strong enough, they pass through any amount of iron shielding. To make a watch truly antimagnetic requires that the movement be free of components attracted to magnets.

The new Omega Railmaster of 2017 meets this requirement. While the case and dial design are evocative of the 1957 model, the movement is entirely made out of amagnetic materials (such as a titanium balance wheel and silicon hairspring). As a result, the soft iron inner casing is no longer needed, and the antimagnetic protection has been bolstered to beyond 15,000 gauss.

This deep innovation predates the 60th anniversary Railmaster, having originally been implemented in the Omega Aqua Terra of 2013. Yet it is emblematic of how deep innovation inspires iteration based on new technologies and changing conditions. Observing the growing strength of electromagnetic fields in the modern world, Omega recognized an alternate kind of countermeasure with the development of the silicon hairspring in the early 21st century.

Superficial novelty stands out for a season before being supplanted and forgotten; deep innovation is self-perpetuating.

In the early 2000s, Patek Philippe formed an Advanced Research Program, formally institutionalizing deep innovation. The initial focus was on silicon. In addition to being amagnetic, the material has desirable qualities ranging from smoothness to durability, and production techniques adapted from the computer industry allow for ultra-high-precision fabrication.

In collaboration with Rolex and the Swatch Group, Patek invested in basic research at the Centre Suisse d’Electronique et Microtechnique that facilitated the brand’s first silicon escape wheel, balance spring, and balance wheel. Each was initially built into a limited-edition Advanced Research timepiece, culminating in the 2011 release of the Ref. 5550 Perpetual Calendar Advanced Research featuring an all-silicon escapement.

The Advanced Research watches were more than mere showpieces. They prototyped silicon technologies that have subsequently benefited the majority of Patek Philippe wristwatches. They were means to an end, the goal being fundamental improvement of chronometry.

This year, Patek has taken the Advanced Research Program in a new direction. In addition to testing a novel curvature for the silicon balance spring, the company is experimenting for the first time with a “compliant” component: a single piece of flexible steel that serves the purpose of many conventional parts just by how it bends.

As was the case with silicon, compliant fabrication adapts research from other industries. For instance, compliant parts are used for mechanical control of astronomical telescopes. In the new Ref. 5650G Aquanaut Travel Time Advanced Research, the compliant part is used to manually adjust the GMT mechanism.

The genius of compliant fabrication is that gears and pivots can be replaced with geometry. In the 5650G, one piece of metal supplants more than two dozen conventional parts, closing tolerances, eliminating friction and obviating maintenance.

As compliance spreads into future movements, chronometry and durability are likely to improve. But the invention could be more deeply disruptive. Compliant mechanisms have to potential to upset centuries of watchmaking by fundamentally changing movement architecture and assembly. In the hands of Vincent Calabrese, they may even evoke a new cosmology.