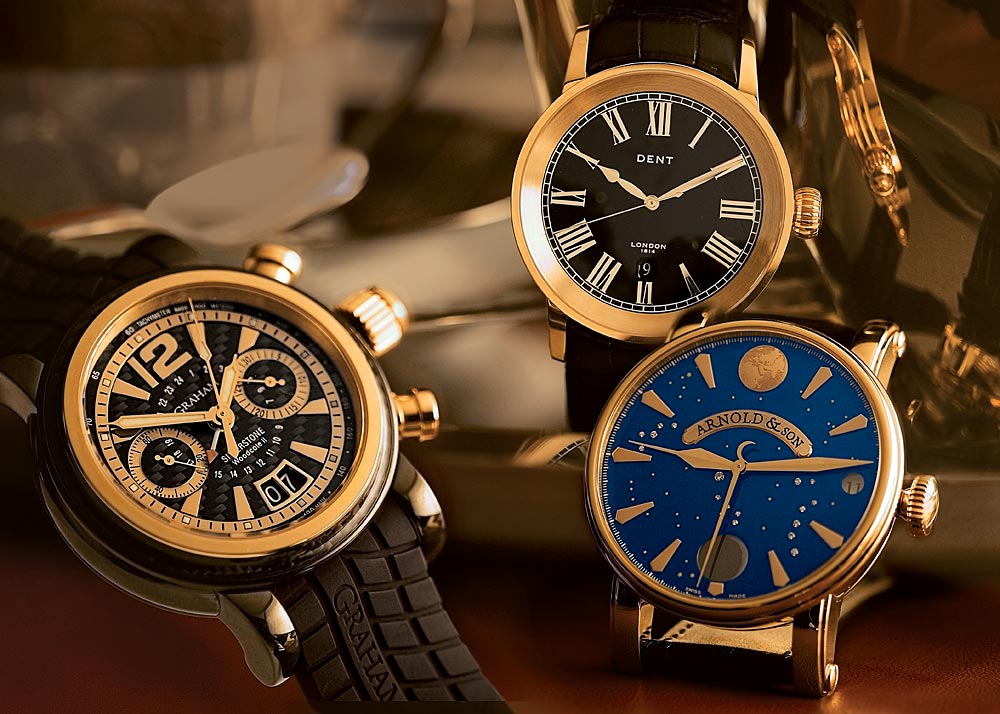 Britannia ruled the waves thanks to the finely jeweled bearings of the marine chronometer. This groundbreaking instrument, which London clockmaker John Harrison perfected in 1764 after 30 years of experimentation, allowed navigators to calculate accurately their longitudinal positions at sea. At that time, no other mechanism could guide navigation with such accuracy, and no nation could rival England’s expertise in the design and manufacture of precision technologies. Indeed, from the 17th to the 19th century, expert clockmakers and watchmakers like Harrison made London the world’s horological capital, the source of extraordinary timepieces for sailors and emperors alike.

Today, the spirit of English horology lives on, though primarily in the workshops of Switzerland. While Roger Smith, a protégé of the English master George Daniels, still crafts custom timepieces at his atelier on the Isle of Man, most notable English watchmakers migrated to the continent years ago. Stephen Forsey and Peter Speake-Marin, for example, bring their native English sensibility to their highly complicated and inventive Swiss collections. Entrepreneurs Frank Spurrell and Twysden Moore recently launched a collection under another illustrious historical English name: Dent. The duo has tapped Peter Roberts, a renowned English master and a consultant to Rolex, as its chief watchmaker. “It’s happening now because it can happen now,” says Roberts, citing the expanding and increasingly sophisticated audience for premium mechanical timepieces. These watches, he adds, are intrinsically linked to England’s rich horological heritage. “This country was once the world leader in innovation.”

In the arena of horological invention, no Englishman surpassed “Honest” George Graham (1674–1751), who apprenticed under the godfather of British watchmaking, Thomas Tompion (1639–1713). He later secured a prestigious appointment to the Royal Society, then under the leadership of Isaac Newton. In the spirit of scientific enlightenment, Graham, who developed the cylinder escapement and chronograph, regularly shared his ideas with others. “He had a fantastic curiosity,” says Eric Loth, CEO of the British Masters, which began manufacturing contemporary Swiss chronographs under the Graham name in 1997.

Loth, a Swiss national and a former Swatch Group executive, has a background in mechanical engineering and metallurgy. In 1995 he bought the defunct Graham brand, along with other famous watchmaking names—such as Tompion, Earnshaw, Quare, Mudge, and Arnold—because he admired England’s dedicated application of physics and chemistry in solving practical problems, such as determining longitude at sea. “It’s so pure,” he says. “It’s so true.”

To resuscitate the Graham brand, Loth merged two characteristically British traits: pragmatism and eccentricity. Pragmatically, he realizes that no watch worthy of the Graham name can be manufactured in England today. The infrastructure does not exist; almost all suppliers are based in Switzerland, and skilled English watchmakers are a dying breed. Loth also recognizes that Graham’s legacy is best served by embracing Honest George’s inventiveness rather than his specific innovations. “His masterworks are too ancient to revive,” Loth says. Instead, he is concentrating on inventive complications, such as the forthcoming Silverstone Woodcote automatic sports chronograph with tourbillon, and on radical new designs with functional foundations, such as the Swordfish. This memorable timepiece features magnifying-glass lenses in the crystal that make the chronograph subdials more readable. Other unusual permutations are the extension of the chronograph pushers (a signature of the oversize Chronofighter series) and their placement on the left side of the watch case, where right-handed wearers can reach them more easily. “We could do that because of Graham’s British heritage,” Loth maintains. “If it were a Swiss name, it would have been rejected, but people agree that the Brits are a bit different.”

In his approach to Arnold & Son, another of his revived English brands, Loth is more conspicuously British, which is to say the watches appear more traditional. They are also more exclusive, with only about 500 Arnold pieces produced in 2007 compared to about 7,500 for Graham. In a sense, Loth takes up where English master John Arnold (1736–1799) left off, producing extremely high-grade navigational chronometers for the wrist. That continuity is possible—despite more than a century’s lapse since Arnold went out of business—because Arnold was the first watchmaker to streamline production in a modern way, making watches of quality in a quantity comparable to that yielded by premier watch manufacturers today.

Arnold launched his career at age 28 with the 18th-century equivalent of a publicity stunt: He created a minute-repeater ring for King George III. While that piece brought renown, his more practical innovations, such as the bimetallic hairspring, attracted several explorers as clients, including Captain James Cook, and resulted in an exclusive contract with the East India Company. To meet increasing demand, Arnold subcontracted the manufacture of simple components, such as screws, and simplified his movements to deliver the most functionality with the fewest moving parts. Loth refers to this process, which allowed Arnold to finish each piece to perfection while improving reliability, as “Arnoldizing”—a philosophy the CEO applies rigorously in his company today. For example, the True North Perpetual tracks both mean and true solar time, integrating these functions on the dial so that the timepiece serves as a horological compass when pointed toward the sun at noon. “This is John Arnold’s legacy,” Loth says. “He wanted to reproduce as closely as possible the earth’s movement in the most reliable mechanical way.”

As late as 1930, London and the vast British Empire relied on an original 18th-century Arnold chronometer, housed in the famous clock at the Royal Observatory in Greenwich, for the correct time. Arnold’s partner, Edward J. Dent (1790–1853), founded the company that built this clock, and today Dent remains the last great name in British horology. That distinction is partly due to the endurance of the Greenwich clock, which remained in service until an electronic movement replaced it in 1946. Yet before the Greenwich clock, in 1859, Dent built and serviced the most famous clock in the world, the Great Clock in London’s Palace of Westminster.

Dent owes its current vigor to two young entrepreneurs, Frank Spurrell and Twysden Moore, former schoolmates who saw an opportunity to make the brand viable once more. “It’s a very British thing to do, to revive an old British company,” Spurrell says. By the time he and Moore came along, Dent was on its last legs. They hired Peter Roberts, whose British upbringing and years with Rolex and IWC made him an ideal associate in the venture. Roberts admired Edward Dent’s inventiveness and the aesthetics of his straightforward, durable movements.

Their first two Dent models use ETA- or Valjoux-based movements, fully refinished with upgraded springs. While both watches are British in their case design (the round Ministry evokes an old-fashioned marine chronometer, and the square Parliament is inspired by London’s Great Clock), the next generation of Dents will feature movements made in the British style. For Roberts, that means “extreme quality and as simple as possible,” he explains. “If there are complications, they’ll be useful. There won’t be any triple-rotating, three-dimensional holographic tourbillons, at least not while I’m still around.”

Roberts admits that his taste may be almost too ascetic, but most of the newer watch firms under British stewardship, including Backes & Strauss, IWI, and Bremont (see the sidebars on pages 82, 84, and 86, respectively), have also adopted simplicity as their mandates. Peter Speake-Marin, a former student of Roberts’, is perhaps even more devoted to English classicism than is his teacher.

Speake-Marin, based in Switzerland, is charting a comeback for the handmade English chronometer and undertaking the construction of his watches in a way that might have been familiar to Graham or Tompion. At the core of his endeavor is a deep understanding of British timepieces, developed over the seven years he worked in high-end watch restoration for Somlo Antiques in London. “I saw the hundreds of different ways in which companies did things,” he recalls. “I saw the problems they had, how things wore out, and what they did to avoid that.” After spending an additional four years making complications for Renaud et Papi in Switzerland, he decided one day to construct his ideal timepiece. “I’d stopped wearing a watch by then,” he says. “I decided that if I were ever going to wear another one, it would be my own.”

Speake-Marin opened the Watch Workshop in 2000, initially setting up in a farmhouse in Le Locle, Switzerland, where he built a pocket watch with a full-plate movement completely by hand. The positive response to the Foundation Watch encouraged him to make a line of automatic wristwatches, called Piccadilly, notable for their chronometer styling and for the robustness of their heavy gold or steel cases. Like many of his peers, Speake-Marin has relied on premade base movements modified to his specifications. However, he now makes a prototype wholly of his own design. The base material, German silver, is traditional in pocket watches. But what really distinguishes the new Piccadilly, Speake-Marin says, is the large size of the movement: 32 mm in diameter and 6 mm thick. “The problem with smaller movements is that, to make them so small, you make certain compromises in durability,” he says. “Where I’ve been able to make the jewels larger, they’re larger. Where I’ve been able to make the gears thicker, they’re thicker. A lot of watchmakers make the mechanics work for the design. I work the other way around, which is more of a British approach.”

Speake-Marin anticipates a revival of the English watch industry. “I think it’s an inevitability,” he says, pointing to the reestablishment of watchmaking classes in places like Manchester. Peter Roberts agrees. Encouraged by the U.K.’s strength in aerospace engineering, Roberts has already begun making tentative steps toward moving casemaking back across the English Channel. “We’re hoping to work alongside other British watch manufacturers,” he says, evoking a past when entire streets in London were devoted to fusee cutters, springers, and gilders. Even Loth, with his deep Swiss roots, envisions eventual repatriation for Arnold & Son and Graham. “I think these brands will end up in England,” he says. “It’s just a matter of time.”