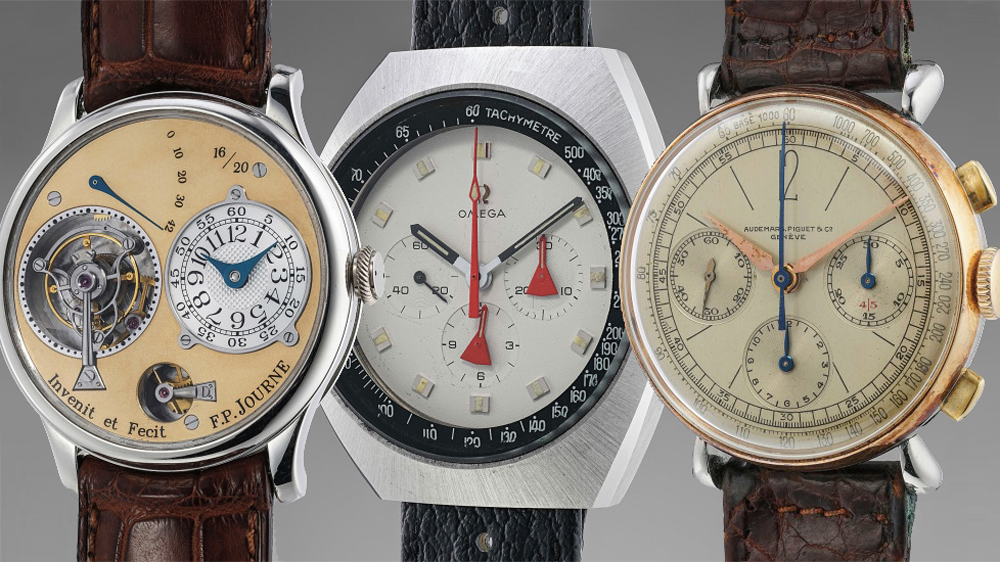 Yes, Patek Philippe and Rolex are still the kings of the auction market but at Phillips’ Geneva Watch Auction: Eight over the weekend, it was an F.P. Journe Tourbillon Souverain, an Audemars Piguet ref. 1533 from 1941, and an Omega ref. ST 145.014 Speedmaster Alaska I that commanded prices over double the top end of their estimates. The three watches shared documented rarity and provenance that trumped the bigger establishment brands of the auction market.

F.P. Journe’s 38 mm Tourbillon Souverain Souscription in platinum, number16 of 20 from 1998, was estimated to sell between CHF 120,00 and CHF 180,00. It sold for CHF 288,500 above its highest estimate for a total of CHF 468, 500. The timepiece is almost brand new and came to auction from a friend of watchmaker François-Paul Journe, who happens to be a pocket watch collector—as a result, this timepiece from the brand’s early watchmaking years was never worn and is in impeccable condition.  The watch is considered a piece of horological history—the prototype for this model, which was made available to the public in 1999, was Journe’s first watch as an independent watchmaker. The first 20 models of the watch were numbered and made available only to close friends and clients. This watch was one of only four to ever be sold at auction.

Audemars Piguet’s 36.5 mm archive reference 1533 from 1941 is another extremely rare timepiece. Only 300 chronograph wristwatches were ever made by the brand between 1930 and 1962. While Audemars Piguet has made chronographs in the modern era, vintage examples are hard to find. The watch came to auction via an Italian owner, who is the direct descendant of the original owner. The timepiece, until now, has sat tucked away in a safety deposit box for the last two decades. It was one of three timepieces sold by the Casanova boutique in Bologna and it is one of only three that have a steel-and-gold case—the rest are in gold. This timepiece also has an unusual green gold dial and is one of only 19 timepieces by the watchmaker during its era that came in a larger size than the typical 32 and 34 mm sizes of vintage timepieces. The watch was estimated to sell between CHF 60,000 and CHF 120,00. It sold for 264,500 above the top-end estimate for 384,500.

Meanwhile, Omega’s watches have mass appeal for their ties to James Bond and lunar landings, but it hasn’t been until recently that they’ve been gaining serious speed in collecting circles. While Phillips’ sale of Elvis Presley’s Omega watch is the king of the Omega auction block, selling for a record $1.8 million last year—the highest price ever commanded by the watchmaker at auction—Phillips’ Omega ref. ST 145.014 Speedmaster Alaska I was still a big draw, raking in CHF 122,750 above its high estimate of CHF 60,000, with a selling price of CHF 193,750. The 45.5 mm watch was the first watch in NASA engineer, James Ragan’s Alaska Project I—the code name for a project to develop watches that could endure the “extra vehicular activities of spacecraft on the lunar surface. The watch was delivered to Ragan in 1969 for testing, and is considered one of the first titanium-cased chronographs. It also houses a version of Omega’s caliber 861 that featured modifications to make it suitable to endure extreme temperature changes in space. The watch is considered one of very few examples of a “Mark II prototype from the legendary Alaska I project. Ragan was also the engineer behind the testing of Omega’s Speedmaster that would select the watch as the official timepiece of NASA.