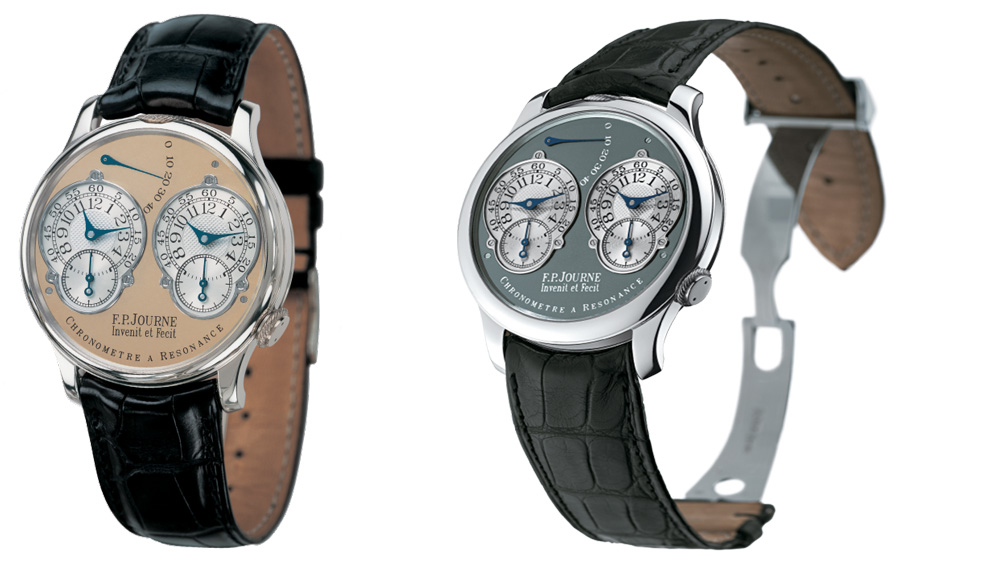 F. P. Journe’s Resonance timepieces gave rise to a new horological aesthetic, set a new standard for horological craftsmanship, and, most significantly, housed dual movements that synchronize themselves via mechanical resonance—a feat that alluded wristwatch makers until 1999 when Monsieur Journe finally made it work. Mechanical resonance is the tendency of two objects oscillating at the same frequency to influence and strengthen one another.  Dramatic examples of mechanical resonance include buildings that sway violently (and sometimes collapse) when earthquakes shake them, or a crystal glass shattering when a singer hits a very specific note. In the case of two small watch movements oscillating adjacent to each other, however, forces are relatively weak, and Journe’s design uses these weak resonances to synchronize the two movements, which, in turn, improves accuracy.

We can think of the resonance in the overall system as a kind of communication that goes on between the two free-sprung balance wheels. No one questions that the balance wheels generate resonance, but some skeptics have questioned whether they can respond to it. Witnessing the movement in action, however, indeed confirms that the two balance wheels do, indeed, synch up with each other.

It turns out that the rigidity of the plates that hold the balance wheels keeps the “conversation” at hushed levels, allowing for communication without disruption to the system. In Journe’s movement, three specific adjustments control the distances between components in order to synchronize the two free-sprung balances. According to Journe, his Resonance timepieces achieve the greatest accuracy in a mechanical timepiece to date.

Journe’s Resonance movement is adjusted in three places for synchronization between the two movements. The most critical is at point #1, where a rack and pinion system moves the right-hand balance cock to an optimal position.

Knowledge of mechanical resonance synchronizing pendulums dates back to at least Galileo, and successful deployment of dual pendulums in clocks dates back to the early Enlightenment. Most notably, French watchmaker Antide Janvier built a few regulator clocks in which the hour and minute hands are driven separately by two pendulum-powered movements that communicate via resonance. On the smaller scale of watches, however, it was Louis Breguet who first experimented with mutually-resonating dual movements in pocket watches, and it was Breguet who first suspected, and then scientifically debunked, the idea that atmospheric turbulence was causing the synchronization by running the system in a vacuum chamber. Breguet, like many of us, was surprised to find that the two movements actually do communicate via mechanical resonance, but his greater surprise (and, we assume, delight) was to confirm that the two movements, once synchronized, reduce each other’s inaccuracies just as they do in dual-pendulum clocks.

Journe followed up Breguet’s achievement in “Montre à deux movements” (French for “watch with two movements”), 185 years later when he became the first to achieve a functioning resonance in a wristwatch in 1999. Without discounting the efforts of his predecessors, it’s fair to say that it was Journe alone who put mechanical resonance wristwatches into play.

Journe’s design presents two entirely independent watch faces bolted to the dial, allowing the owner to track dual time zones. Though his bolted-on design looks familiar today (imitators abound), critics disparaged it back in the 1990s, a time when serious horology was not yet trading in avant-garde aesthetics. Today, however, Journe’s design is regarded as a modern classic, one which appears to abide tradition when up against the whimsy of other independently-made modern watches like MB&F’s sci-fi-inspired Horological Machines, Konstantin Chaykin’s cross-eyed Joker Watch, or Richard Mille’s candy-adorned Bonbon collection. Arguably, Journe’s bolted-on sub-dials helped define the new traditions of this millenium.

20 Years of the F.P. Journe Chronomètre à Résonance
Journe released the very first Resonance watches in late 1999, with the most recent Resonance series celebrating its 20th Anniversary—the latest one will debut later today (stay tuned). The Resonance has gone in and out of production over the years, with rather clear delineations between the various series.

Series One Souscription Models, 1999-2001
After a couple of prototypes were scrapped, Journe’s first Resonance came to life in 1999 as Serial Number 000, and that watch still lives in his archive. Beyond that one, there were likely 17 or 18 resonance watches constructed upon order, known as Souscription or Subscription pieces, which was only available to clients who purchased Journe’s first timepiece, the Souscription Tourbillon, and were reportedly, sold mostly to the watchmaker’s close friends. Later, Journe would drop the Souscription documentation, and make roughly 400 Series One Resonance watches.

No. 008 is a solid representation of the early Resonance “Souscrpition” watches from F. P. Journe.  Courtesy of Sotheby's

Series II Resonance models (Ref. RN) 2004 – ~2009
These watches house solid gold movements, rather than brass. This has distinguished all of Journe’s movements since around 2004. Also for the first time in a regular production Resonance piece, a 40mm case was available.

The specifications of a Series II Resonance are as follows:

It’s worth noting for collectors that there were two movements during this period: the first 1499.2 indicated the new version of the movement in gold, while the 1499.3 had a newly configured power reserve indicator mechanism inside the movement (despite being a mechanical change, some suspect this was for aesthetic reasons only). It seems that very few of the 1499.2 movements were made, and they likely date from around 2005-6.

Series III Resonance models (Ref. RT) 2010 – 2017
To celebrate the 10th anniversary of the Resonance, Journe revived the watch with significant changes. These watches are most noticeably differentiated by their asymmetrical dials, with the left-hand dial spinning two concentric rotating gauges. The movement remained the same for this period, but the reference number changed to “RT.”

A 20th Anniversary Edition (2019)
To celebrate the 20th anniversary of the Resonance, Journe released a wholly new take on the timepiece, one that has fans of the Resonance smiling widely because the beloved symmetry of the original models has returned, but the left-hand subdial retains the 24-hour scale of the asymmetrical Series III. Available only in 40mm versions and also sporting integrated bracelets, these watches possess a style that feels up to the minute yet traditional.

Just when collectors figured the Resonance was gone for good, Journe released the Black Label Resonance as part of a limited collection (Journe’s first Black Label Resonance was introduced in 2006 and it was also available on the asymmetrical dial models seen above). This watch has a black-nickel coated dial and whitened silver subdials, creating a high-contrast dial that boldly highlights Journe’s now-classic dual dials.