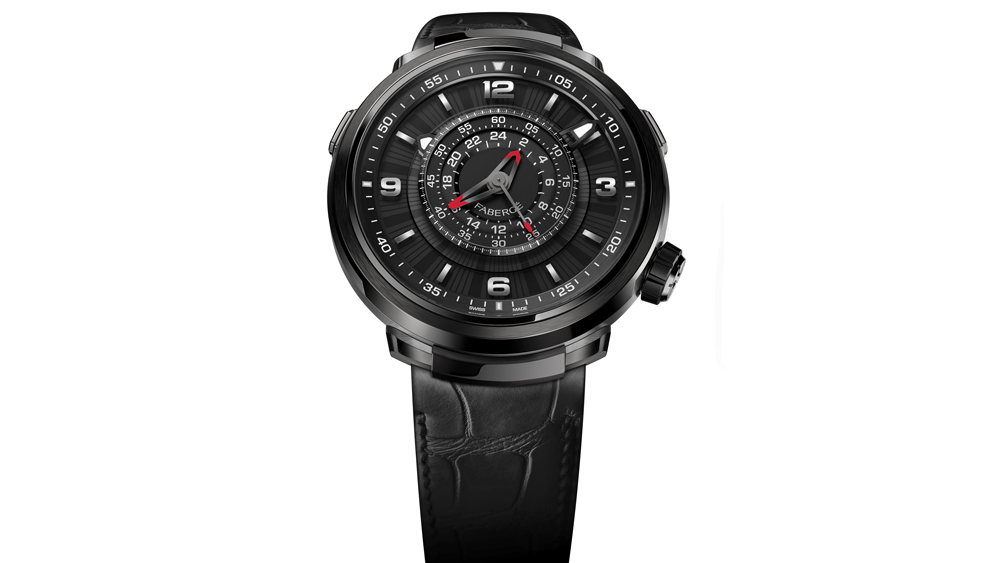 The Fabergé Visionnaire Chronograph is the world’s first timepiece equipped with the Agenhor AgenGraphe, a radical new reimagining of one of the most ubiquitous complications in watchmaking. “People are consumed by the idea that a chronograph has to have hands in the center of the dial,” observes Jean-Marc Wiederrecht, the bespectacled and slightly grizzled independent watchmaker who created the revolutionary chronograph movement driving the watch. “We have actually emptied the center of the movement and have filled it with new parts.” This architecture—which moves the timekeeping elements to the periphery of the watch, while a chronograph occupies the center—is directly represented on the dial of the Visionnaire Chronograph ($34,500 in ceramic, $39,500 in rose gold), the first model to use the Agenhor AgenGraphe. The chronograph display, including the seconds hand and coaxial jumping hour and minute hands, is mounted on a raised subdial in the center of the face, under which the hour and minute hands slide. The winding rotor is also positioned underneath the dial, allowing an unimpeded view of the movement through the caseback.

A system of spiraling snail cams—the same component that brought acclaim to Wiederrecht’s signature retrograde displays—is the key to making the chronograph hour and minute hands jump precisely to their next positions. The snail cams charge a sprung lever to make the hands jump and also serve as convenient reset mechanisms: Gentle pressure on the cams will return the hands to zero with far less mechanical stress than the hammer-and-heart system long employed in traditional chronographs. The mechanism is engaged by an equally unusual construction, a friction-based lateral clutch that uses a set of shallow safety teeth to prevent the two wheels from slipping if a shock should occur.

Visible through the caseback crystal, the Visionnaire Chronograph’s movement is much more interesting than the often-bland architecture of modern vertical-clutch chronographs. The design’s real value, however, is intellectual rather than physical. Wiederrecht’s thorough rethinking of the chronograph system emphasizes that ingenuity is still a prized component of mechanical watchmaking. “It is all made conventionally,” says Wiederrecht. “Only the ideas are unconventional.”