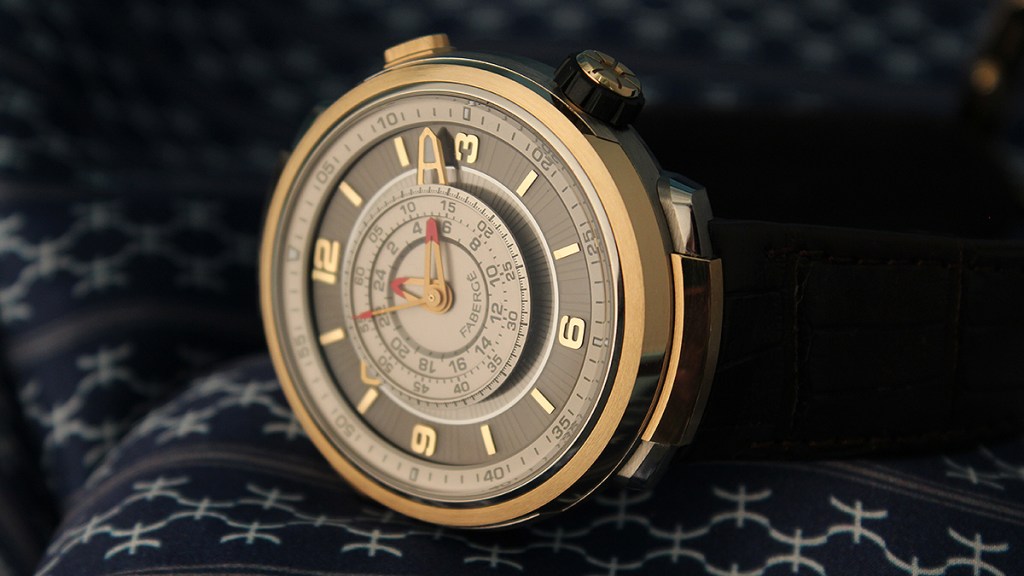 It has been a very strong last couple of years for Fabergé, and after our first viewing of the Visionnaire Chronograph earlier this year, it is clear they aren’t slowing down anytime soon. The brand’s last two complicated wristwatches—including the Lady Compliquée Peacock that made our Best of the Best list in 2016—won prizes at the Grand Prix D’Horlogerie de Genève in 2015 and 2016, and we wouldn’t be surprised if the Visionnaire Chronograph made it three for three. Once again, the brand has turned to the remarkably talented Jean-Marc Wiederrecht of Agenhor—a well-known supplier of unique complications to luxury brands including Harry Winston, Van Cleef & Arpels, Romain Jerôme, and Hermès (among others). Wiederrecht has developed a reputation for his out-of-the-box approach to movement design, and we couldn’t wait to take a closer look at his latest creation.

Retaining the same design DNA as last year’s Visionnaire DTZ, the chronograph will look rightfully foreign to you unless you have seen its older sibling. A hooded lug case design and bullhead pushers at 10 o’clock and 2 o’clock make it instantly stand out from anything conventional, but that’s just the beginning. Golden hour indices rest on a smoked sapphire outer dial that partially reveals the movement’s winding rotor. A pair of wide and stubby hands provide time indication on this outer track in relatively conventional form (other than the entire length of either hand not being visible). From there, what we can only refer to as a significantly proportioned central subdial takes up the bulk of the under-the-crystal real estate, providing indication for the chronograph. Once you are accustomed to its design, the Visionnaire Chronograph is one of the most easy-to-read chronographs on the market, adding a layer of practicality to its unique design aesthetic.

In designing the Visionnaire’s caliber, Wiederrecht rewrote the rulebook to an extent that we haven’t seen in quite some time. Unlike most chronographs on the market, the Visionnaire’s chronograph will time events of up to 24 hours using three central hands on its subdial. At first glance, many may think its central subdial is a second time zone rather than a timing mechanism. From a movement architecture standpoint, Wiederrecht’s creation is a confounding one. Looking through its exhibition caseback, even the most astute collectors may have a hard time comprehending what is going on amongst the 477 parts of the caliber, especially when compared with any other modern chronograph. Design and function aside, you’ll be happy to know the complex caliber still offers a respectable power reserve of 60 hours while oscillating at a fairly standard 3 Hz, or 21,600 vibrations per hour.

Fabergé has already begun taking pre-orders on both the two-tone rose gold and titanium version of the Visionnaire Chronograph seen here ($39,500) as well as the all black ceramic variant ($34,500). The first deliveries of the new release are expected by November. (faberge.com)