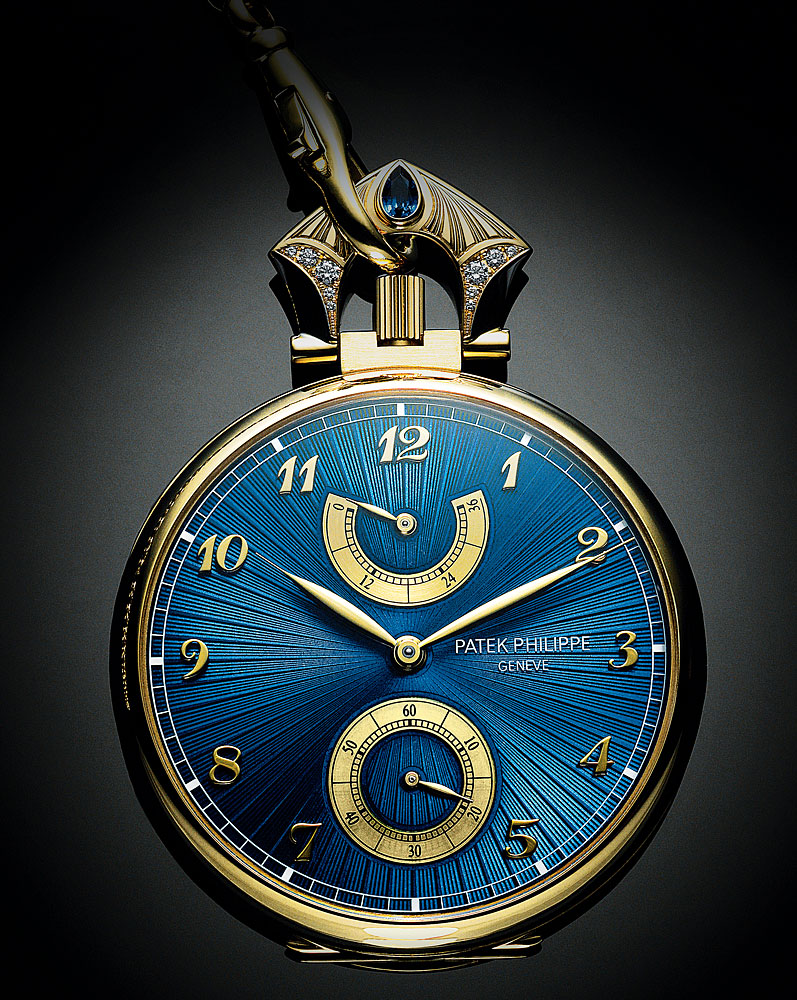 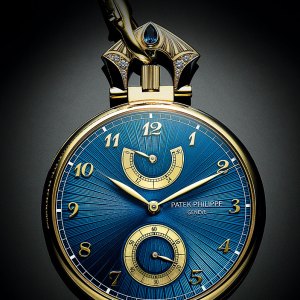 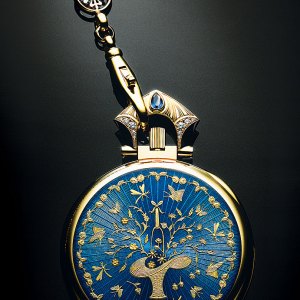 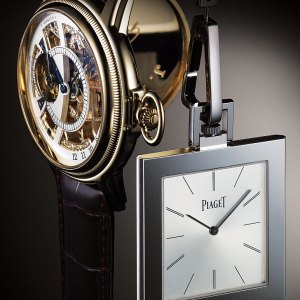 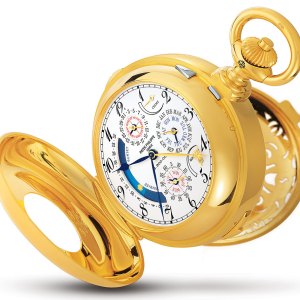 When he is at home on sunday mornings, Frank Müller, CEO of German watchmaker Glashütte Original, likes to select a pocket watch from his collection and examine the antique movement. He will shut the case, twist the winding stem, and then give the watch a shake to set the balance wheel in motion. “It’s like when a doctor slaps a newborn baby,” Müller muses. “A pocket watch is a highly philosophical item that provides an occasion to reflect on life.”

Though they may do so discreetly, the world’s premier watch manufacturers continue to invite such leisurely contemplation by producing new pocket watches, as well as wristwatches, that reference their grand ancestors. Glashütte Original’s Julius Assmann 4, for example, is an intricate skeleton tourbillon watch that can be carried on a chain or worn on the wrist. Meanwhile, Patek Philippe continues to produce a handful of highly complicated pocket watches each year, and Vacheron Constantin’s special-order workshop currently is working on six pocket watch commissions. “Companies are starting to make pocket watches again because the market for antique pocket watches is very active,” explains Osvaldo Patrizzi, chairman of watch auction house Antiquorum, “and today, you can have major complications in pocket watches that you could never have imagined 50 years ago.”

Patek Philippe established the standard for complicated pocket watches in 1933, when the company completed a timepiece that New York banker Henry Graves Jr. had commissioned eight years earlier. Graves had requested the most complicated watch ever made, and the mechanical wonder he received, comprising more than 900 parts, calculated sunrise and sunset and sidereal time, and displayed the position of constellations over New York City. Patek surpassed that 24-complication benchmark in 1989, when, to commemorate the company’s 150th anniversary, it produced the Caliber 89, a 3-pound pocket watch featuring 33 complications built from 1,728 parts. Ten years later, the Graves watch fetched a world-record price of $11 million at a Sotheby’s sale. “That was a startling number,” says Larry Pettinelli, president of Patek Philippe USA. “I think it certainly spurred more interest in pocket watches and particularly in complicated pocket watches.”

For Patek (which was an underbidder at the Sotheby’s auction), the Graves also has served as a reference point for more recent pocket watches, including the Star Caliber 2000—the culmination of an eight-year-long project—which showcases 21 complications including phases of the moon and the motion of constellations. “Innovation has always been a part of Patek, and when [company owner] Philippe Stern makes these pocket watches, he wants to create something that pushes the limits,” Pettinelli says. “They evolve from historical pieces we’ve made, but he wants to challenge the watchmaker, the casemaker, the people who design the presentation box.”

In producing the Star Caliber 2000, one of the greatest challenges was replicating, for the first time in a portable timepiece, the chiming of the Westminster clock tower. Mechanical feats such as miniaturizing Big Ben require watchmakers to integrate the latest technology with old-world craftsmanship. “A watch like the Graves was made by trial and error, before we had computers,” explains Pettinelli, who estimates that designing Patek’s modern ultracomplicated pocket watches without using CAD would take at least two decades—if it could be done at all.

Because of their size, pocket watches are the ideal platform for implementing Westminster chimes and other innovations that computers and robotics have made possible. But even with the new technology, these pieces remain prohibitively expensive for all but a few companies to design and manufacture. “This is an opportunity to produce something that most companies can’t,” says Antiquorum’s Patrizzi. “It’s really promotional.”

Patek regularly offers limited quantities of relatively simple pocket watches, but grand complications are reserved for only avid collectors whom the company deems qualified to acquire such pieces. “The reality is that Mr. Stern really loves complicated pocket watches,” Pettinelli explains. “Sometimes we’ll get a caller asking what’s available for purchase, and he’ll say that he doesn’t want to sell any.” The company is even more reluctant to accept commissions because of the speculative market. “It creates a frenzy because everyone wants a one-off piece,” says Pettinelli, “and I hate to say it, but they’re just using that to make money.”

Vacheron Constantin, on the other hand, has established a special-order division to make unique pieces, including highly complicated pocket watches. Overseen by Maison Vacheron Constantin director Dominique Bernaz, the department, which opened last year, represents a return to the way fine watches originally were manufactured. “What were luxury brands doing at the beginning of the 20th century?” Bernaz asks rhetorically. “They were doing nothing but special orders. You would go to Hermès or Louis Vuitton in Paris to order your luggage, and you would go to Vacheron in Geneva to order your watch.”

Vacheron already has 11 commissions under way. These orders will keep dedicated engineers, watchmakers, and constructors, who assemble the pieces, working at full capacity for the next five years. Bernaz says that most of these pieces feature complications that never have been attempted before and never will be made again, though he will not reveal any details about the watches. “Customers ask for new things that push the engineers to think,” he explains. “Many industries have lost contact with their consumers. Working on commissions helps us to understand what our customers want.”

The client is involved in every stage of the process, signing off on drawings and monitoring the progress of the project on a dedicated Web page. Just as they do for a production model, the Vacheron engineers create hundreds of CAD-generated blueprints for a custom watch—one for each gear and screw. “We could make the watch on the bench without plans,” says Bernaz. “It would be faster and cheaper, but there would be no added value. We’ve been here for 250 years, and we have to be able to service a watch when it comes back to us.”

Such a laborious process is particularly expensive when it is channeled into a single, unique piece. “If we were going to continuously produce the movement for 20 years, the cost would be divided by 20 or 30 thousand,” Bernaz says. But, for today’s Henry Graves, nothing less than a pocket watch designed and manufactured from scratch will suffice. For instance, Bernaz currently is working on a set of four tourbillon pocket watches, each with an additional feature; one will have a detent escapement, which improves upon even tourbillon accuracy. Another client set out to top the Graves piece by commissioning a watch with 27 complications that range from a minute repeater to a novel feature that Bernaz declines to discuss. For such an undertaking, a pocket watch was an obvious choice because it provides more space than a wristwatch, and therefore allows for more possibilities. “In pocket watches, people can express their craziest dreams,” says Bernaz. “You can have musical features, automatons, and you can combine many métiers, different techniques of decoration, on the same watch.”

Of course, another possibility is simplicity. Piaget celebrated the 50th anniversary of its hand-wound, ultrathin Caliber 9P movement this year by producing a limited-edition Altiplano pocket watch. The piece is powered by a reissue of the original Caliber 9P, which Piaget has not manufactured in decades. Square with a slender profile, clean face, and narrow indexes, the Altiplano resembles a Piaget wristwatch attached to a heavy gold chain or a smooth leather cord. Production is limited to 50 pieces: 25 in pink gold and 25 in white gold. Piaget also will produce at least seven Altiplano tourbillon pocket watches powered by its Caliber 602P, which, at 3.5 mm thick, is hailed as the world’s thinnest tourbillon movement. Piaget has fitted the mechanism into a sleek and square, 18-karat white gold case.

Far more prevalent than the transplanting of wristwatch movements into pocket watches is the adaptation of pocket watch design for wristwatches. This year, Patek Philippe introduced the Ref. 5159 with an officer’s-style caseback, and A. Lange & Söhne adapted the traditional key-winding mechanism for its upcoming Lange 31, which is powered by two mainsprings supplying a 31-day power reserve. Breguet recently unveiled a limited-edition split-second chronograph, with a tachometric scale, modeled on the company’s 2170 pocket watch, which sold in 1929, and the brand’s Tradition Fusee Tourbillon features a fusee-chain transmission system, a configuration derived from an 18th-century pocket watch design. Glashütte Original references pocket watches by incorporating into its wristwatch movements hand-engraved balance cocks, gold chatons (the rings into which jewels are set), and blued screws.

“Historically,” says Müller, “Glashütte’s workshops produced pocket watches. Today we reinterpret them in a modern way, and at a higher standard.” Precision machinery has narrowed tolerances (the acceptable range for the variation of dimensions in machined parts) from a couple hundredths of a millimeter to five-thousandths, improving accuracy and facilitating the creation of such complications as the flying tourbillon used in the aforementioned Julius Assmann 4, which can be worn on a chain or slid into a larger case secured to a strap for the wrist.

Müller sees the convertible timepiece as transitional, an innovation in its own right but also a step toward resuming production of true pocket watches. He acknowledges that the market for pocket watches is small, but he does not believe that it need be so. In fact, he foresees a renaissance in pocket watches that will be fostered by the same factors that returned mechanical watches from the brink of obsolescence. “We’re living in a complex world that’s changing rapidly, so that what’s true today is false tomorrow,” he observes. “People are looking for reassurance, and they find it in the old ways of doing things. Watching the wheels move inside a pocket watch, we can experience the high-speed world in a less hectic manner.”